Eighteen rioters were arrested in the capital. A failed rocket launch toward Israel hit Beit Hanun in the northeastern Gaza Strip.

By ANNA AHRONHEIM, UDI SHAHAM, TOVAH LAZAROFF
DECEMBER 15, 2017 15:18
A Palestinian demonstrator stands near burning tires during clashes with Israeli troops at a protest against US President Donald Trump's decision to recognise Jerusalem as the capital of Israel, near the West Bank city of Nablus December 15, 2017
(photo credit: REUTERS/MOHAMAD TOROKMAN)
Advertisement
Four Palestinians were killed by security forces over the weekend as violence escalated in the West Bank and the Gaza Strip.A Border Police officer was moderately wounded when a rioter stabbed him in the shoulder outside of Ramallah.Riots have broken out every day since US President Donald Trump declared on December 6 that Jerusalem is Israel’s capital.The largest riots took place on Friday near the Gaza border, where some 3,500 Palestinians demonstrated at nine locations along the security fence, burning tires and throwing stones at troops, the IDF said.Troops fired “selectively on the chief instigators of the extremely violent riots,” the army said.Palestinians reported the death of two protesters, Yasir Sukkar, 31, and a wheelchair-bound protester, Ibrahim Abu Thuraya, 29, who lost both his legs in a 2008 Israeli missile strike.Wafa, the official PA media agency, reported that 103 Palestinians were wounded.Hamas chief Ismail Haniyeh attended Abu Thuraya’s funeral in Gaza City on Saturday and said that people led by someone like him would achieve victory. The other three Palestinians killed on Friday were also buried on Saturday.According to the IDF, some 2,500 Palestinians took part in riots in the West Bank – in Kalandiya, Hebron and Bethlehem – burning tires, and throwing Molotov cocktails and stones at Border Police officers.As many as 263 protesters were injured, at least four of them by live fire during clashes outside Ramallah, according to the Palestinian Red Crescent.During clashes in Anata, just east of Shuafat and outside Jerusalem, Basel Ibrahim, 29, was shot in the chest and killed, according to Wafa. It also reported the shooting death of Muhammad Aqel, 19, on the outskirts of Ramallah.
Protests in Bethlehem during "Day of Rage" on December 15, 2017 (Seth J. Frantzman) 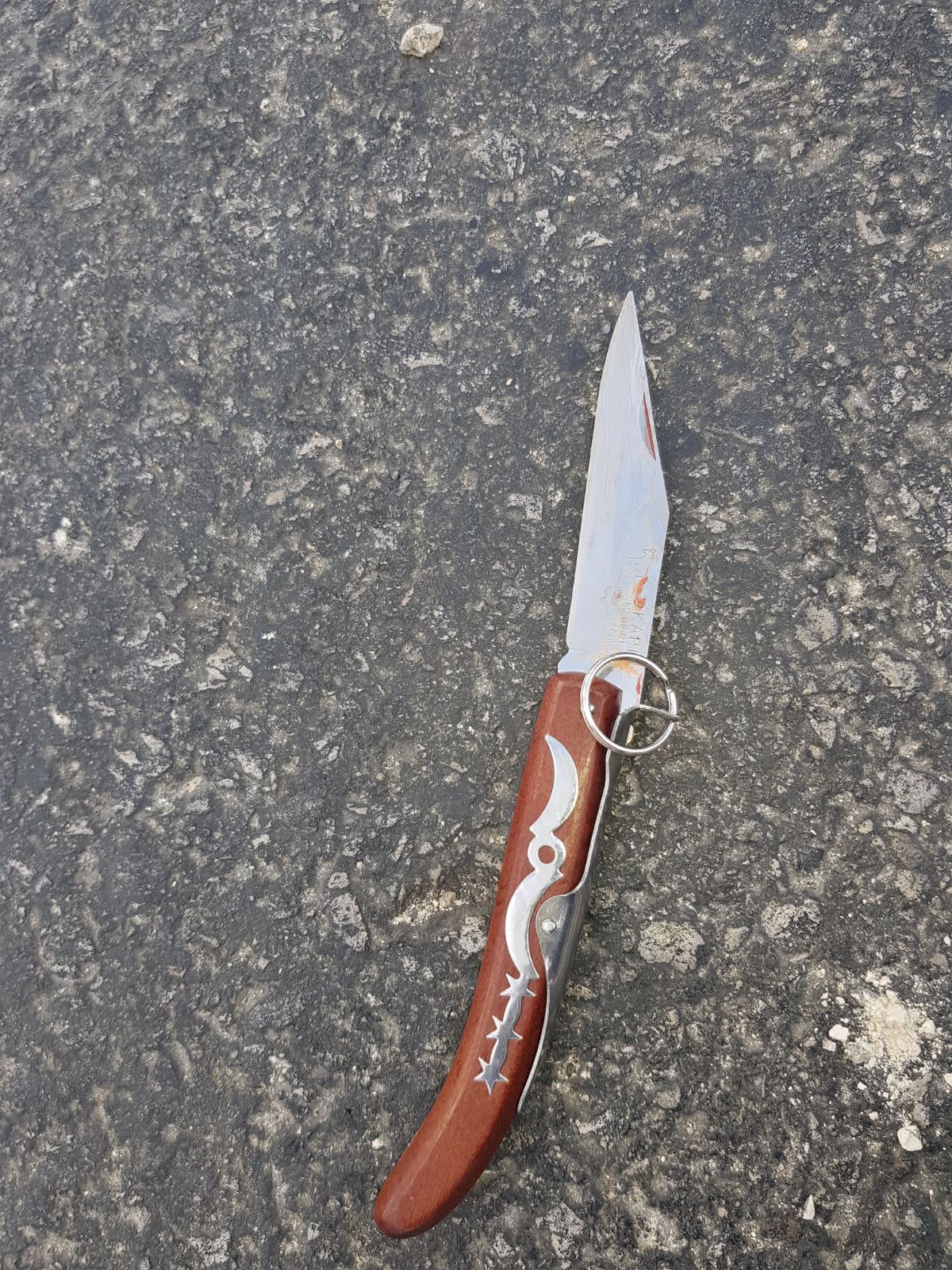 Knife used by Palestinian assailant in stabbing of Israel Border Police officer in Ramallah. (photo credit: POLICE SPOKESPERSON'S UNIT)Aqel’s shooting, at a traffic circle in El-Bireh, adjacent to Ramallah, was caught on multiple cameras, some of which show him stabbing a Border Police officer, and some showing border police shooting at him.In the videos, it is possible to see a knife in Aqel’s hand as he lay on the ground. In a few of the shots, the coat he is wearing falls open, revealing a black box with wires attached to his waist, which resembles a suicide belt.The Israel Police said it was investigating reports to determine whether Aqel was wearing a real explosive device or a fake one.

The above video, which appeared on Palestinian television and shared on social media, shows the aftermath of the stabbing in Ramallah. “When the other officers saw the stabbing, they opened fire, which led to his incapacitation,” police said in a statement. “When the troops approached the terrorist, they identified an explosive belt, which led to additional fire to prevent him from triggering it.”The Israel Police said that they were also investigating the suspicion that Aqel infiltrated the area by pretending to be a journalist, which is how he may have managed to get close enough to stab the officer.


Riots also took place in east Jerusalem over the weekend. Police said that 18 people were arrested for disrupting the public order. A Red Crescent representative said that 16 Palestinians were wounded.Following Friday prayers at al-Aksa Mosque, which thousands attended, violence broke out between police and protesters near the Old City’s Damascus Gate.Despite metal fences that had been placed in the plaza outside Damascus Gate to prevent protesters from gathering, demonstrators managed to assemble.The crowd chanted slogans such as “Not West and not East – all of Jerusalem is Palestinian,” and, “Trump, Trump, you will see – Palestine will be free.”


Police forcefully dispersed the protesters from the plaza, and clashes broke out on nearby Sultan Suleiman Street. Police said that five people were arrested.On Saturday, violence also erupted outside Damascus Gate, during which six people were arrested.Overnight Friday, confrontations broke out in the Isawiya and a-Tur neighborhoods. Rioters threw rocks and Molotov cocktails, and fired fireworks directly at border police and Israel police.Seven people were arrested.Police also arrested two women for assaulting a police woman and breaking her hand outside Damascus Gate on Thursday. The court extended the women’s remand until December 18.The Israel Police said in a statement that it would maintain its high alert throughout the capital, particularly in east Jerusalem.“Every attempt to disrupt the order, including attacking police officers, will be answered with an immediate and firm response,” the statement read. Later on Friday, a rocket fired from the Gaza Strip fell short of Israel, hitting a residential building in Beit Hanun in the northeastern part of the enclave, causing considerable damage to it.“Only a week ago, a classroom was destroyed in a public school in Beit Hanun, and this evening, in another unfortunate incident, the house of an Egyptian family from Beit Hanun was badly damaged by a rocket fired by terrorist operatives from Gaza,” read an Arabic-language Facebook post by the coordinator of government activities in the territories.The past week has seen the most serious level of violence between Israel and Hamas since the end of Operation Protective Edge in 2014. So far in 2017, 23 rockets targeted Israel, 12 of which were fired in the past week, with four being intercepted and eight striking in Israel.Reuters contributed to this report.