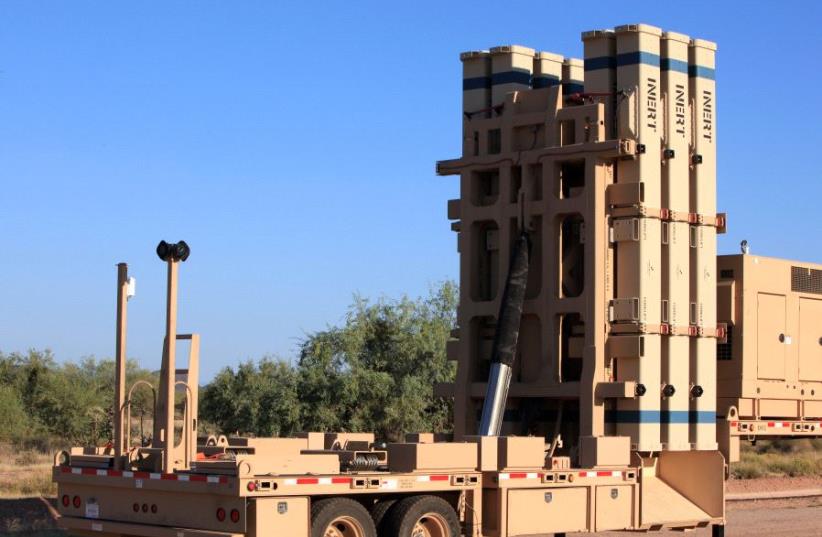 David's Sling interceptor
(photo credit: IDF SPOKESPERSON'S UNIT)
Advertisement
At around 2:30 p.m. on Tuesday, Israelis enjoying the slopes of the Mount Hermon ski resort heard a loud bang and saw smoke trails in the skies above them. The Iron Dome missile defense system had intercepted a long-range missile fired by Iranian forces in Syria.The missile was an Iranian-made surface-to-surface model with a range of some 200 km. with a payload of hundreds of kilograms of explosives that was fired from the outskirts of Damascus. The launch of this type of missile doesn’t happen at a moment’s notice. It took months of preparation and the approval of the highest officials in Tehran.Israeli intelligence must have identified the chatter. They knew it was coming.According to Syrian reports, an hour earlier Israeli jets carried out a rare daytime strike on Iranian targets in Syria. No special instructions had been given to the thousands of civilians enjoying the day and no warning siren was sounded.However, the IDF was prepared, operating the recently upgraded Iron Dome to cover Mount Hermon.While the primary targets of the Iron Dome system are short-range rockets and other artillery rounds that have been successfully intercepted, like the Iranian surface-to-surface missile on Sunday, the job should be done by the David Sling missile defense system.This system became operational two years ago, and was first used last year against two SS-21 Tochka tactical ballistic missiles launched from Syria.But, they missed their mark and David’s Sling has not been used since then.Part of Israel’s multi-layered missile defense system umbrella, David’s Sling was designed to intercept tactical ballistic missiles and medium-to-long-range rockets, as well as cruise missiles fired at ranges between 40 to 300 km.The Iranian missile would have made an ideal target to demonstrate to the Israeli public that the expensive defense system actually works.Each interceptor launched by Israel’s David’s Sling system costs an estimated $1 million, but the army insists that the cost is not relevant when they are launched in order to defend the home front.Israel’s air defenses also include the Iron Dome, which is designed to shoot down short-range rockets; and the Arrow system which intercepts ballistic missiles outside of the Earth’s atmosphere. Compared to the David’s Sling costly interceptor, each Iron Dome Tamir interceptor has a reported price of between $100,000 and $150,000.But that shouldn’t be why we haven’t seen the use of David’s Sling since its failed interception.Israel continuously improves the technology behind its anti-missile systems, with the Iron Dome upgraded with the Tamir interceptor that has a demonstrated capability against cruise missiles.A week before the system was used, it was reported by Inside Defense that the United States Army wanted to purchase two Iron Dome batteries from Israel.The Iron Dome undergoes upgrades “all the time” a spokesman for Rafael Advanced Systems told The Jerusalem Post, adding that the “system performed in accordance with its variety of capabilities.”It was a good opportunity to give the new system a chance to fire while showing off its new capabilities to the US, as well as to the Iranians who want to deter Israel from launching further attacks against their interests in Syria.But the question keeps popping up: Where is the David’s Sling?Are there problems with the joint Israeli-US project that the public doesn’t know about?