Why a Beduin village keeps defying the bulldozers

Buildings in al-Arakib, in northern Negev, were destroyed for 111th time in an ongoing battle between the state and residents. 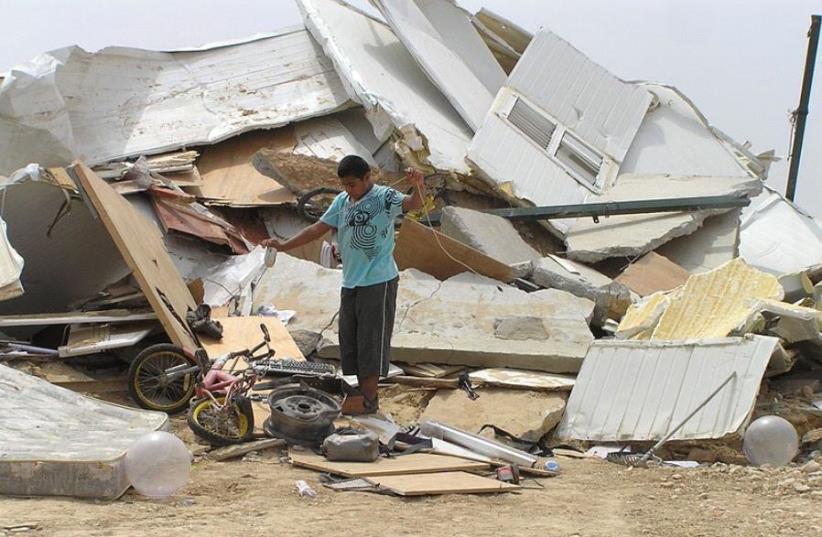 A demolished house in the unrecognized Bedouin village of al-Arakib, few days after all the houses of the village were demolished by Israeli law enforcements, 31 July 2010
(photo credit: WIKIMEDIA)
Advertisement
Police had a simple message to the residents of the unrecognized Negev Beduin village of al-Arakib when they came to destroy it for the 111th time last Wednesday, according to Sayah al-Touri, a village leader.“This is state land and it is forbidden for you to be here,” Touri quotes the police as saying. “If you don’t come out, we will destroy your homes on you.”Soon after, the 22 black plastic structures that housed more than 200 people were destroyed. But a day later, four structures had re-sprouted, erected by local students and Jewish supporters of the Beduin as the first step to restoring all 22 structures.
Protest following Beduin Village demolition (Courtesy)
The demolish-rebuild dynamic has been under way since 2010, when the state destroyed all the village’s homes – back then there were 57 of them, and they were made of block – and bulldozers uprooted olive, carob and date trees there to make way for forestation by Keren Kayemeth LeIsrael-Jewish National Fund.Numerous court appeals on behalf of the Beduin have always ended up in favor of the state. In 2011, the Beersheba District Court decided not to accept the plea of the plaintiffs to maintain the status quo in the village and prevent the demolition of the structures.Other court cases over the land are still pending.Al-Arakib is one of 36 unrecognized Beduin villages located in the Negev. In 1953, the state expropriated the village’s land, but residents dispute that there was a legal basis. In the view of the Israel Lands Authority, the territory is state land that the Beduin began invading in 1998 after never having a permanent settlement there.However, Touri says Beduin have lived at the site continuously since 1905, when his clan purchased the land from the Okbi family. A copy of what Touri says is the purchase document is on display in one of the tents.To Yossi Maimon, a senior official in the Beduin Development and Settlement Authority, the issue is black and white.“[Al-]Arakib is state land and must be clean of illegal buildings,” he said.Against this, Touri says: “I haven’t invaded and I’m not an invader. These are lands of our grandparents and fathers, and we have until now existed on the land. The State of Israel is the invader. It’s clear to everyone that the state invaded, not us.”Because they share this view, the al-Arakib residents constantly rebuild and defy the police, the Israel Lands Authority, the Beduin authority and the KKL-JNF. Touri says that by living at the site, the Beduin are protecting their lands.They are also protecting al-Arakib’s Muslim cemetery, where members of the Touri tribe have been buried since 1914, he says.Touris from all over the country are interred there, their tombstones marked with a reference to the opening words of the Koran: “In the name of God, the merciful, the compassionate.” Four people were buried there in the past two weeks, he says, adding that after demolitions, homeless residents sleep there.“The cemetery was here before the State of Israel and before the Jews thought of coming to take the lands of the Palestinians and to expel them,” he says.Since the big demolition in 2010, some families with large numbers of children have resettled outside al-Arakib because of the hardship of having their homes destroyed again and again. But on Fridays and Saturdays, they come back to the village, Touri says.The state’s efforts to clear the land have included spraying al-Arakib’s crops with chemicals from 1999-2004, he adds. He himself has been in the heart of the struggle. In 2011, he was wounded in the right arm by rubber bullets during a demolition and cannot eat with that hand.The cemetery used to be fenced off with a main gate, but in 2014, bulldozers destroyed the fence, Touri says. The minaret of a mosque that had been in the cemetery was destroyed in the same operation, according to Rabbi Arik Ascherman, head of Haqel–Jews and Arabs in Defense of Human Rights, a left-wing interfaith human rights organization.Ascherman was in al-Arakib that day and has tried to assist the villagers in recent years. He says government bulldozers not only uproot al-Arakib’s trees, they also sometimes demolish its homes and have been photographed doing this. Israel Lands Administration bulldozers carry out the brunt of the demolitions.Touri blamed KKL for trying to uproot the Beduin and plant trees instead.“Keren Kayemeth LeIsrael’s forestation activity is done solely in accordance with the law and as instructed by the State of Israel,” a statement from the organization says. “KKL is not party to the territorial dispute. KKL will continue to act in accordance with the law and for the Jewish people and the State of Israel.”KKL-JNF did not respond to a query on what would be the fate of the village’s cemetery under its forestation plans.