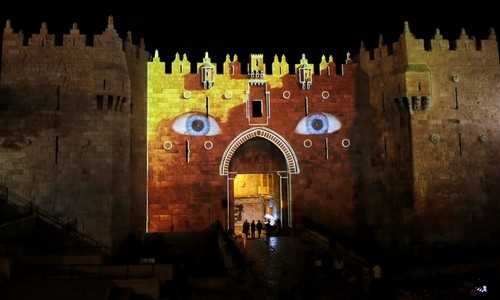 Tens of thousands of visitors are expected to converge on Jerusalem’s Old City each evening for the next week, as all four quarters are cast aglow during the capital’s sixth annual International Festival of Light.Beginning Wednesday night, the festival will feature 17 acclaimed international light artists, including numerous interactive light shows, from 8 p.m. to 11 p.m. until June 19 – all free of charge. Local artists and students from the Bezalel Academy of Arts and Design will display light fixtures at the show as well.In a statement, Jerusalem Mayor Nir Barkat lauded the festival as a cultural beacon for the nation, and the world.“Jerusalem is reclaiming her proper status as an international cultural center and magnet for large numbers of young people, tourists and visitors, who are coming to enjoy the intermingling of a glorious past history and heritage with a lively and colorful present,” the mayor said.In addition to each evening’s light shows, the paths of each of the Old City’s four quarters will be lit with white, blue, green and red trails featuring sounds to provide a “multi-sensory experience” for the public, the municipality said.
Subscribe for our daily newsletter