Fashion designer Roni Rabl and her daughter Yael enjoy designing and selling clothes throughout the world.

By DAFNA ROTNER
JUNE 9, 2014 16:56
Branching out
(photo credit: Courtesy)
Israeli fashion designer Roni Rabl’s professional path is particularly interesting.Besides her international success in business, she works and enjoys full partnership with her daughter Yael. Via their transatlantic relationship, where the mother is in Israel and the daughter is in New York, they navigate their way through the world of fashion.Rabl is also a busy grandmother. She has six grandchildren. Four are in Israel from her psychologist daughter, and two are in the US.“I can say that of all my 70 years, this year has been the most productive. Age is an advantage. I don’t like dressing fancy; I wear sneakers. I haven’t done any cosmetic surgery, and I enjoy eating. I don’t have Botox in my cheeks or color in my hair, but I have knowledge. Based on this, I wrote a series of lectures that can help young people starting out in life by giving them information about sales, pricing and markets. I want to pass on this knowledge to others.”In this interview, Rabl describes her unique path to success.Where did you start the business that bears your name?
I was born and raised in Tel Aviv. I gave birth to my daughters there, and I still live and work there, even though my business has been in America for the past 19 years. 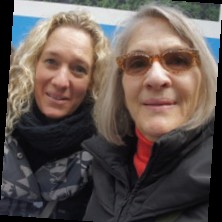 In the 1970s and ‘80s, when I was in my 30s and 40s, I worked as a procurement manager for Israeli fashion chains. I then began to represent fashion companies that purchased clothing in Israel, and subsequently I began doing it on my own. In the 1990s I already built collections and concepts with Israeli companies, and I exported clothing to Europe and America.How did you get into the industry?
My younger daughter went to live in New York in the 1990s and studied at FIT. One day she asked me to send her a clothing collection. I sent her a few things, which she sold to an American chain. One item, a multicolored sweater, was especially popular because people had just begun to pay attention to clothing for largesize women. From there, we began to manufacture in Israel clothing for the US, and afterwards we expanded our production.Were you the designer?
In Israel they called me the Queen of Knitwear. Unfortunately, the factory I worked with for many years recently closed. It was one of the last ones in Israel. From the 1990s until 2006, I designed my collection. Most of the manufacturing was done in Israel, and some was done in other parts of the world. At one stage, I decided to make changes in the company.I wanted to move away from production and build something new based on what already existed. We began to represent companies. We built a concept. Many people go according to the ‘grab as much as you can’ method, but I don’t believe in that.What is your concept?
I wanted to create a system where people would continue to come to me for one specialty or another. I didn’t want to be an agent; I wanted to sell things that would be exclusive throughout the US. I already had warehouses and a management system, but I needed massive growth. It’s been almost 10 years since, and you can say it’s been a pretty big success. We have a very loyal clientele. Our products are sold in boutiques, small chains and via catalogues.Does your daughter always work with you?
Let’s be precise: I work with her. She manages the business, the marketing, banks, payments and customers. I’m the merchandising director. I deal with the product until the sales stage. She’s in New York and I’m in Israel, but I move around all the time and spend a lot of time on planes. There’s a lot of live traffic between us. I go there twice a year to launch our new collections.What are your plans for the future?
We receive dozens of requests from companies that want to work with us. From past experience, I learned that if you’re not in demand, people don’t listen to your advice.You have to appreciate other people’s knowledge.That’s why we established the Lauren Vidal Consulting Department, where I work on projects that last from one season to the next. It’s very successful, and I’m really happy with it. I work in Israel, Turkey and the US.
Subscribe for our daily newsletter