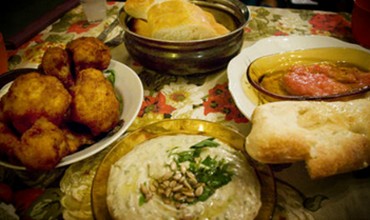 Puaa (Kelly Levy)The restaurant, named after its owner, Puaa Ladijensky, has remained a clear staple in both the Jaffa flea market and local dining scene over the last ten years. In her humble beginnings, Puaa set out as a flower seller, who on occasion would serve tea to local customers. Popularity for Puaa’s welcoming reception grew, leading her to open a café in the manic flea market. Puaa remained undeterred by the quiet, dirty character of the streets that existed past market closing time. As the neighborhood shifted under the gaze of gentrification, so too did the reception of Puaa’s establishment, leading her to move to a larger location.Lending itself to Jaffa’s flea market, Puaa brings the market to the dining table. Every piece of furniture, decoration and crockery, born out of the market, is for sale. The café becomes a bazaar in itself, a twist on market life, with the resurrection of old reborn into the wonderland of Puaa. Fresh flowers and plants placed on every table is Puaa’s stamp of her original market trade throughout the restaurant. Its patrons are a mixed crowd; local hipsters slouch on comfy couches, trendy Tel Avivians sip wine at their candle lit tables and Jaffa store owners mingle with the staff.Cuisine: Home style meat, fish, dairy and vegetarianPrice range: NIS 30-50 3 Rabi Yochanan Street, Jaffa(03) 682-3821, (03) 681-1140Hours: Sunday to Friday from 9a.m. till 1a.m., Saturday from 10a.m. till 1a.m.
Not kosherAbu Hassan 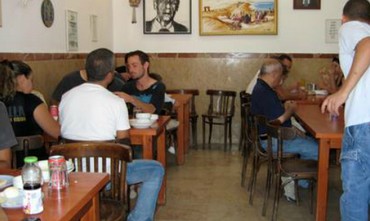 Abu Hassan (Zoe Jick)Jaffa hummus legend Abu Hassan’s reputation extends across the city as the only worthwhile place to dip your pita. Abu Hassan’s fast pace atmosphere is echoed by the workers’ nonchalance. The establishment knows its dishes are good, so there are no frills involved with its presentation. Even when asked about the history of the place, the response given is “we just make hummus."  In truth, other than the fact that Abu Hassan (the current owner's father) opened the restaurant in 1966, little is known about its history. There are only three options on Abu Hassan’s non-existent menu: hummus, masabacha, and the triangle plate of hummus, masabacha and ful in one hearty serving. Curiosity surrounds the secret of their hummus: what makes it so balanced and creamy? What makes this hummus so darn good? No one knows. At Abu Hassan, they simply don't brag; it's as if perfection is expected of hummus, with no justification necessary. This expectation reflects the bond between Middle East cultures and hummus. The dish dates back to the thirteenth century, and stayed a staple ever since. Cuisine: Hummus, MasabachaPrice range: NIS 30-50 1 Dolphin St., Jaffa(03) 682-0387Hours: Sunday to Friday from 8a.m. till 3p.m.
Not kosherYoezer Wine Bar 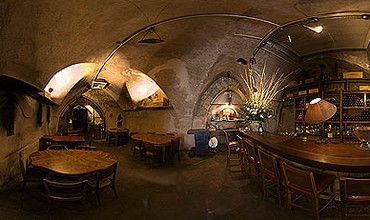 Yoezer (Kassandra Grunewald)For a real out of the city experience, Yoezer Wine Bar will transport you to the Ottoman Empire, and has been doing so for over 13 years. Converted from a 19th century wine cellar complete with dark old stone arches and dreary lighting by dripping candelabras, the environment alone provides an unforgettable experience. The first time your eyes feast on the vaulted roof, uneven floors, lumbering tables and random ancient dining chairs, you will think you have stumbled into the wrong place. The Provençal French menu was constructed by one Israel's best-known gourmets, Shaul Evron. The food menu focuses on simplicity and excellence, while using fresh quality ingredients to make classic French and Italian dishes. The prices do not run cheap, but it is most worthwhile. If you are not up for one of the legendary streaks or the "40 eggs-yolks Pasta", which is served with Botardo (a Turkish delicacy of dried fish roe), perhaps try the Crodo, a mouthwatering serving of veal tartar with fresh truffles. Even so, the restaurant is most well known for its excellent selection of wines from all over the globe. Yoezer is said to have one of the most extensive and finest wine menus in Israel and includes a selection from Burgundy, imported exclusively for Yoezer. Cuisine: Classic French and Italian foodPrice range: NIS 110-2002 Ish-Habira St. Jaffa (near the Clock's Square)(03) 683-9115Hours: Sunday to Thursday from 12:30 p.m. till 1a.m., Friday to Saturday from 11a.m. till 1a.m.
Not kosherAbdu Hadayag 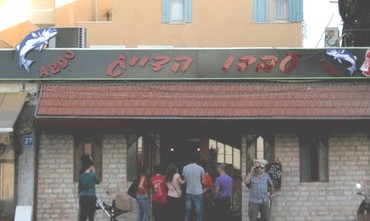 Abdu Hadayag (Kassandra Grunewald)According to neighborhood legend, Abdu, was indeed a fisherman in his early years, and you may even catch a glimpse of him. His simple establishment has been a fixture of Jaffa's main street among the local businesses and apartments. The humble decorations include nautical visions of one or another. The day's catch varies; the menu includes grouper, red snapper, gray mullet, and mackerel, as well as melita, an Israeli breed from the barracuda family.Abdu Hadayag has for years been serving good quality fresh fish and homemade salads.The traditional way in these fish restaurants is to order the fish and before you can blink your table will be covered with various middle eastern salads - including: cucumber salad, carrot salad, humus, tehina, eggplant salad, parsley salad, okra, pickled salad, olives and pickles, tabbouleh salad, spicy tomato salsa and many more. The endless bucket of pita bread comes plain and with za’atar and will keep you coming back for more. Careful not to fill up before the fish even arrives - easier said than done.Cuisine: Fish restaurant, Middle Eastern foodPrice range: NIS 70-80 37 Yefet Street, Jaffa(03) 518-2595Al Matbah 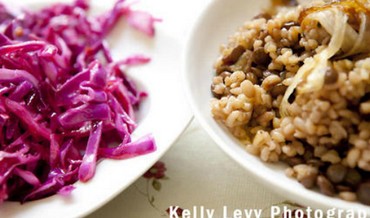 Al Matbah (Kelly Levy)Hamoudi and Layla, his wife and business partner, share the enchanting story of Al Matbah.Al Matbah is much more than a restaurant; it is a symbol.  It opened less than a year ago and represents Layla’s profound personal history.  Coming from a family with a Jewish Iraqi mother and a Muslim Arab father, she firmly believes in the ideology of harmony among different peoples.  Layla believes in “taking the beautiful things from each culture and using them in our daily lives.”  With respect for all religions, she strives to portray food’s power to bring individuals together and inspire dreams of coexistence. So far, Al Matbah only employs two Arab women, and Layla deeply wishes to be able to touch more lives with this project.  She realizes that it is difficult for Arab families to adjust to the idea of their daughters, sisters, or wives working outside of the home.  Nevertheless, she opens Al Matbah’s rustic wooden doors to this possibility of change.  Also, Layla yearns for more help in making a lasting impression on society through Al Matbah—a goal she could only achieve with additional loving hands in her kitchen.Cuisine: Seasonal, homemade Middle Eastern food                                        Price range: NIS 40-60 Yefet Street 28, Jaffa(03) 081-895, 052-426-2473Hours: Al Matbah is currently only open at the weekend when Hamoudi and Layla have time to cook. Not kosher