It's All About The Music

By DANA ZAX
JUNE 9, 2014 17:39
elisha banai1
(photo credit: ORIT PNINI)
Elisha Banai is Israeli music royalty, but his talented famous family is only a part of what's so intriguing about him. He is a rock star without trying to be a star, focusing on the rock part, purely there for the music.
Banai and his band Arba'im Ha'Shodedim have been around for almost four years now, and with two albums on their record, and one more in progress, they will be sharing a stage with the legendary Soundgarden at RockN'Roller festival in only a few days.
"We are very excited. All the members of Arba'im Ha'Shodedim's have grown up listening to Soundgarden, we all know all of their songs by heart ", says Elisha.
When we start talking about his work, Elisha tells me he loves each and every part of the creation process. "Starting from the moments you sit at home, writing a song on your acoustic guitar, to the rehearsal room, recording the songs and up to listening to it playing on the radio, each and every one of these moments is amazing. It is the second time I get to enjoy it and now I'm moving on to the third album, music is just the best thing in the world and we love it.”What is your work method?
"It varies, while working on the first album I was writing at home, and then working on the songs in the rehearsal room with the band. On the second album all of the band members collected the songs for it together, and now I write and record the songs at home with my acoustic guitar. I have no specific work method, I evolve, try new things and go wherever the music takes me.”Is it true that you and the other band members best friends?
"We are all friends since ages five and six. It's our gang, we've been best friends ever since we can remember ourselves.” Isn't that mixing business with pleasure?
"It is, and it's not easy, but friendship is on top of everything else. It is the most important thing and understanding that help us a lot".How would you define your style? Israeli rock?
It's true that we are influenced by the Israeli rock genre, that was a bug hit in the 90's, but even tough I sing in Hebrew, most of our music is influenced by British and American music. We simply play rock, rock in Hebrew sounds like a better definition.

Who are your biggest influences?
It starts with the Beatles – good old Paul McCartney, John Lennon, George Harrison and Ringo Starr, all together and each on their own, the Rolling Stones, John Frusciante and many great things that are happening nowadays. It really never ends, every new thing I listen to takes me up higher to new places. Music is something you can never get enough of. 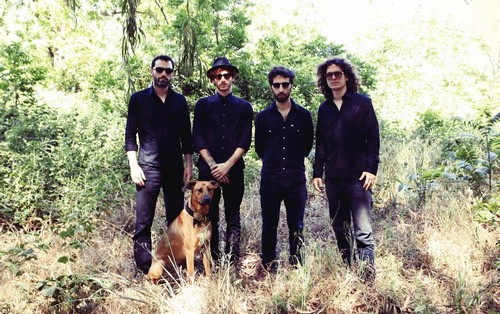 What do you mostly listen to lately?
The last Strokes' album is amazing, and the last Editors' double album is absolutely unbelievable. I listen to a lot of music all the time.I heard you have worked in the food industry for a while.
I worked for Yonatan Roshfeld at Herbert Samuel for four years. I haven't been doing it lately because I'm all into music.

Do you still cook?
I love cooking, I cook at home all the time.

You also had your share of acting, in Noa Yaron's Mekimi.
Yeah, I experienced it and I had a great time. It's not something I give much thought to, but I'm also not saying I won't do it again. I'm not there yet, I'm more into the third album than into acting. Music burns in my bones.It sounds like you are very driven.
I don’t see it as driven, it's more like – when there's something you love doing, all you want is doing it. It's like when you're in love with a girl, all you want to do is be around her – that's how music makes me feel.You and your parents are known to be very close friends.
It is very important for a family to be close, but family is family and friends are friends, and it is vital to keep it that way. But we are very close, it's all cool and I love my family a lot.

Is there a chance for a professional cooperation?
Time will tell.

What tip would you give a young musician that wants to make it in the industry?
Make music. Record five songs, see if people like them, if they do – that's great – and if they don't, start over and try again. Open a Facebook page and start putting yourself out there, schedule concerts and start performing. It's hard as hell but there really isn't any other way. The secret is a lot of hard work and of course passion, because without passion what's left in this world?

Where do you see yourself in ten years?
Still playing music.Could've seen that one coming, right? Elisha and Arba'im Ha'Shodedim will be performing at RockN'Roller festival on June 18th, come enjoy their amazing vibes and great music, and don't forget to check out Soundgarden while you're there.