ISIS claimed that it had detonated a number of explosives next to a pipeline linking "the Jews" and "the apostate Egyptian government." 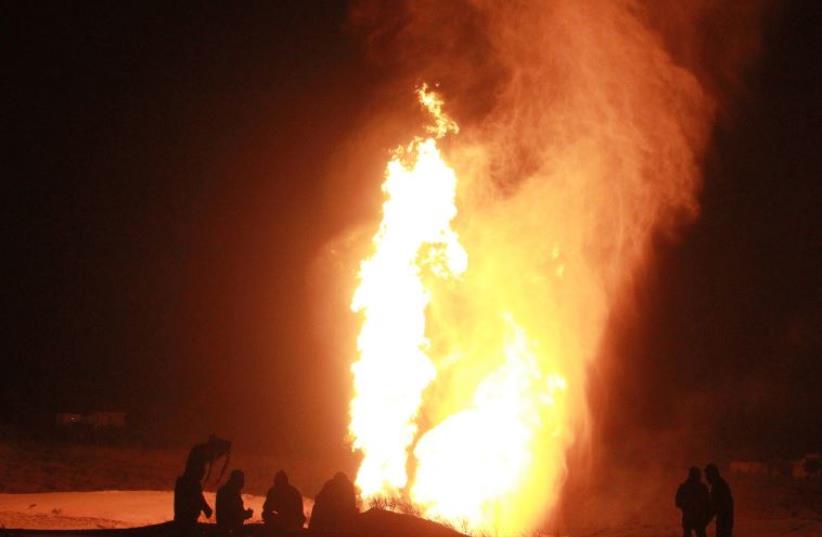 DATE IMPORTED: February 05, 2012 A fire burns on a gas pipeline in the Massaeed area west of the Mediterranean coastal town of al-Arish, North of Sinai, February 5, 2012.
(photo credit: REUTERS)
Advertisement
Militants attacked a gas pipeline in Egypt’s northern Sinai Peninsula on Sunday night, reportedly aiming to disrupt gas flow between Israel and Egypt. Israeli authorities said gas supply between the countries remained unaffected.The Islamic State’s Sinai Province affiliate claimed responsibility on Monday for the attack on the pipeline. Local sources told Paris-based AFP that the gas pipeline targeted was in fact a domestic supply line for a local power station.In a statement, the Sinai affiliate said it had detonated a number of explosives next to a pipeline linking “the Jews” and “the apostate Egyptian government,” and had caused damage to the pipeline.The attack happened near the city of El-Arish, with initial reports claiming that the targeted pipeline was a line carrying gas from Israel’s Leviathan gas platform to Egypt. The partners operating the offshore platform stated that no damage had been caused to the EMG pipeline connecting the countries, and gas flow was continuing as usual.Energy Minister Yuval Steinitz’s office stated on Sunday night that gas was continuing to flow from Israel to Egypt and it was working with relevant authorities to investigate the nature of the incident.Reports on Monday morning stated that the pipeline that was hit by the attack was actually a domestic one that leads to a power station in El-Arish, which supplies electricity to homes and factories in the central Sinai, according to AFP.Israel started exporting natural gas to its southern neighbor last month from the Leviathan field, which commenced operations on January 6. Exports follow a $15 billion, decade-long deal, signed by energy firms Delek Drilling and Houston-based Noble Energy in February 2018, to supply 64 billion cubic meters of natural gas to Egypt from the Leviathan and Tamar gas fields, located off Israel’s coast.Gas will be supplied to Egypt’s Dolphinus Holdings via a 90 km. subsea pipeline, connecting the southern Israeli city of Ashkelon to the Egyptian network near El-Arish.Delek Drilling CEO Yossi Abu told an investors’ conference on Monday that the project had a “very significant security system,” Reuters reported. “We are not blind to the risk and are prepared for every scenario,” said Abu, citing the presence of an alternative pipeline system, a quick response mechanism and insurance covering damage impacting gas exports to Egypt and Jordan.Last year, Egypt paid a $500m. fine to Israel for backing out of an agreement to provide natural gas, following jihadist attacks on the pipeline in the Sinai Peninsula. Previous militant attacks closed the long-dormant pipeline, then-operated by Egyptian gas transport company Gasco, a subsidiary of the national gas company EGAS, for weeks.At the time that the gas supply was halted in 2012, gas flow in the opposite direction from Egypt to Israel was supplying the latter with more than 40% of its natural gas needs to produce electricity. Terrorists blew up the gas line in the Sinai three times during the first six months of 2011.Eytan Halon and JTA contributed to this report.