"The IDF will not hesitate to act against the terrorist organizations operating against it." 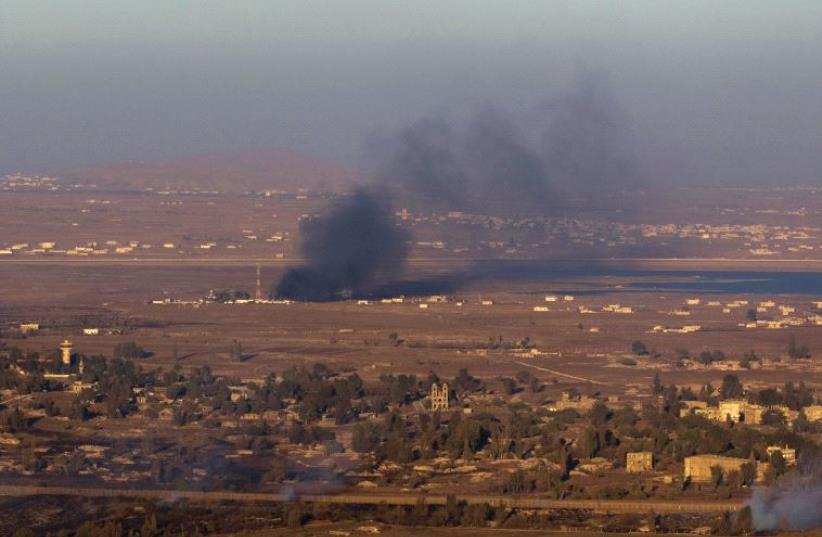 IS DETERRENCE working? Smoke rises last year on the Syrian side of the Golan Heights during fighting near the border.
(photo credit: REUTERS)
Advertisement
The IDF on Monday morning again responded to an ISIS attack Sunday against the Israeli Golani Reconnaissance Battalion operating along the Syrian border, the military spokesperson's office reported.The Israeli Air Force attack targeted an ISIS-held location in the south of the Syrian Golan heights early Monday.Some 10 tons of explosives were said to have been dropped by the IAF on the ISIS target in the retaliatory strike. A military spokesman said that the strike had targeted "an abandoned military facility, which was previously used by the United Nations and served as a location for ISIS to consolidate their offensive forces and operations near the border. This is a response to the attack performed yesterday, and was aimed at preventing the return of the terrorists to the facility which would constitute a substantial threat in the area.""The IDF will continue to act to protect the citizens of Israel while maintaining the IDF's freedom of action within the sovereign territory of Israel, and will not hesitate to act against the terrorist organizations operating against it."On Sunday, the IAF struck a terrorist cell affiliated with Islamic State after its members fired across the border at an IDF unit. Four terrorists were killed, while no IDF soldiers were hurt.In the first clash between the IDF and the ISIS-linked group, an air force missile destroyed a vehicle carrying four operatives from the ISIS-linked Khaled Ibn al-Walid Brigade (formerly known as the Yarmouk Martyrs Brigade) who had opened fire at a Golani Brigade patrol in the southern Golan Heights at around 8:30 a.m. Sunday morning, east of the community of Avnei Eitan.The patrol came under attack by small arms and mortar fire from the terrorists from just across the border. An IAF aircraft silenced the fire.In light of the incident, field workers and residents were told to evacuate the area near the border until calm was restored.Noam Amir/Maariv Hashavua and Anna Aronheim contributed to this report.