Something strange in the air at Haifa Earth Day

Thousands visited the park throughout the day, with families barbecuing and enjoying quality time during Hol Hamoed. 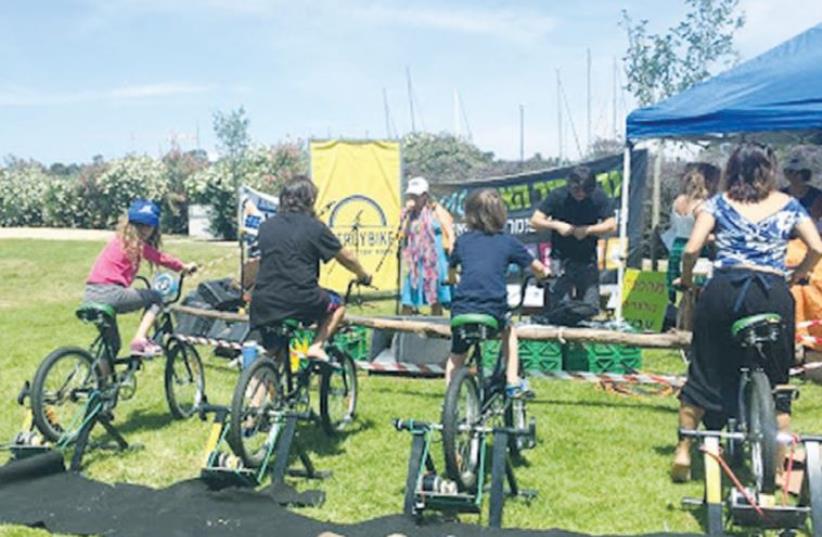 EARTH DAY CELEBRANTS try out electricity-generating bicycles yesterday in Haifa’s Kishon Park.
(photo credit: MICHELLE MALKA GROSSMAN)
Advertisement
Haifa has been in the headlines for months due to its alarming pollution problem and that was what apparently made it the appropriate spot for Israel’s annual Earth Day celebration.Thousands of celebrants made their way to the city’s Kishon Park, bordering the notoriously polluted namesake river that has been the focus of rehabilitation attempts in recent years.Although efforts are under way to turn around the city’s pollution problem, it was apparent to all who attended that this is just the beginning. A smell similar to that of cooking gas wafted through the air at the event, which eventually speakers identified as smoke coming from the factories and petrochemical facilities that are embedded in the heart of the Haifa Bay area. It was only then that visitors experienced the reality that Haifa residents live with on a daily basis.Despite the alarming smell, joviality was also in the air.Thousands visited the park throughout the day, with families barbecuing and enjoying quality time during Hol Hamoed, the intermediate days of Passover.Though Earth Day around the world was celebrated last Friday, it was delayed a few days in Israel due to Passover, so that more visitors could participate and enjoy the sun.The central theme of the event was renewable energy, especially solar power. The message was clear that solar power should be the next big thing in Israel’s energy mix. Different environmental groups showed its potential at the off-the-grid event.Two teenagers prepared grape slushes in a solar-powered blender at the Greenpeace booth, served in compostable plastic cups, while the sound system for the musicians was powered by a combination of solar panels and electricity- generating bicycles.According to Tsur Mishal, director of environmental NGO EcoCinema which provided the stage’s electricity, 2,000 watts were being created per hour through renewable sources. Mishal said that solar energy could easily power all of Israel’s energy needs. With the current technology available, 50 percent of the nation’s energy needs could be met with solar panels covering only 2-3% of its surface area. The only issue remaining involves the means to store enough electricity to cover demand during nighttime hours.Hadash MK Dov Khenin told The Jerusalem Post that only 2% of Israel’s electricity comes from renewable resources, which he called “totally absurd.” He said that Israel is in a race against time to solve the pollution problem, which he blamed on the government putting economic concerns above public health. However, he was quick to point out that gradual improvements in public transportation are in the works. “In the past two years, Haifa Bay has become a symbol of the struggle against pollution as well as a symbol of change,” he said.Later on in the day, Zionist Union MK Yael Cohen-Paran spoke to the crowd while holding an inflatable ball displaying a map of the world.“The Earth is not a game,” she said. “The polluted air here is killing and is creating sick people here and now, not in another 20 years.” Afterward, she told the Post that part of the problem lies in bureaucratic incompetence.Over the weekend, Environmental Protection Minister Avi Gabbay represented Israel as he signed the Paris agreement on climate change at the United Nations headquarters in New York. Cohen- Paran said that despite the signing, the Haifa Bay residents’ lobby which she heads still has to check in regularly to make sure progress is being made on cutting down pollutants in the area.Jonathan Aikhenbaum, the campaign manager for Greenpeace Israel, told the Post that people will start choosing solar energy if obstacles are removed. He said that only businesses can get permits to build additional solar panels on their premises. “Water heaters are an achievement from 40 years ago,” he said, speaking about the solar panels that top most Israeli roofs.They are used solely to heat up water.He added that solar energy is cost effective not just for individual consumers, but also in terms of the money that would be saved at hospitals treating people sick from pollution. “A single system of 80 square meters results in NIS 5,000 a year in savings,” he said.