Although more than 90 percent of women say after giving birth that they want to breastfeed, only about 58 percent do so because of various factors, including pressure from formula companies. 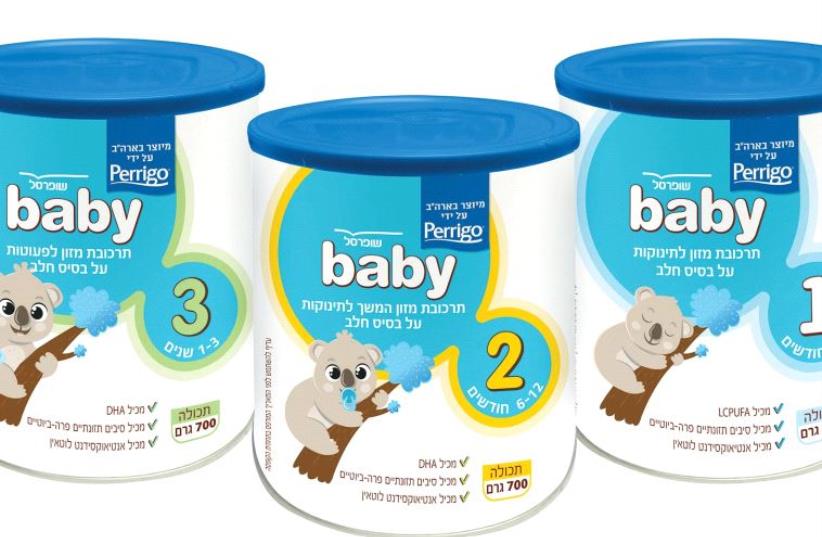 SHUFERSAL’S BABY formulas will enter into Israel’s NIS 570 million infant formula market.
(photo credit: Courtesy)
Advertisement
The current marketing war between producers of mothers’-milk substitutes threatens to reduce the level of breastfeeding in the country, according to the Association of Public Health Physicians in the Israel Medical Association, which is asking Health Minister Ya’acov Litzman to come out with a public call encouraging breastfeeding.
Marketing surrounding the import of a new baby formula from Perrigo Company in the US has prompted competitors to join in, Prof. Nadav Davidovitch, a leading epidemiologist and public health physician at Ben-Gurion University who chairs the public health physicians’ group, wrote in a letter to Litzman.
The only reason for the “aggressive media war,” claimed Davidovitch, is competition and economics because, until now, Materna and Similac have had near-monopolies in the market.
Shufersal, which recently began distributing the Perrigo product – Baby – advertises the formula as having “Health Ministry approval,” and the others also have approval from the ministry to be imported, manufactured and sold. However, Davidovitch said the attempt to break the economic stranglehold of the product has led to a campaign “that is liable to mislead the public into thinking that the ministry encourages giving babies the Perrigo formula or to encourage women to forgo breastfeeding and give [their babies] formula instead.”
The association, therefore, is concerned that the public relations and advertising war will “significantly harm” the rate of breastfeeding, which is has been demonstrated to be more healthful to babies and their mothers than reconstituted milk powders. In fact, health authorities recommend breastfeeding exclusively recommended during the baby’s first six months of life.
Israel is a signatory of a World Health Organization agreement to encourage breastfeeding and minimize the promotion of baby formula. However, because of the expense of feeding newborns in public hospitals, a tender was approved years ago that allows companies to provide free formula to the institutions and distribute samples to new mothers in many obstetrics departments.
Although more than 90 percent of women say after giving birth that they want to breastfeed, only about 58 percent do so because of various factors, including pressure from formula companies, the association said. Other factors include “technical problems” in hospitals, such as separating babies from mothers in obstetrics wards and the lack of a sufficient number of professional breastfeeding counselors on site. In those hospitals that do have enough counselors, breastfeeding rates are much higher, Davidovitch said. Furthermore, well-baby (tipat halav) centers that examine babies and educate mothers are understaffed and lack computers and other basic supplies, he added.
The Health Ministry spokeswoman has not commented on the association’s statement.
Advertisement
Subscribe for our daily newsletter