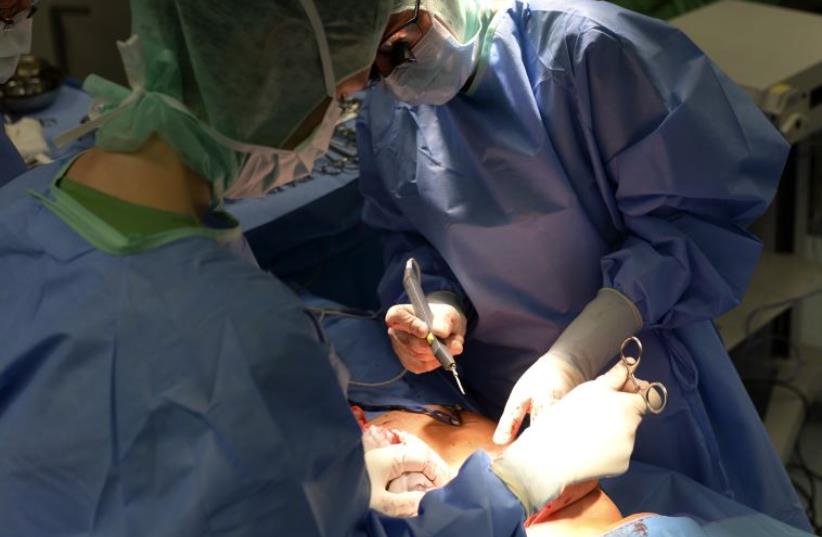 German doctors perform liver surgery in Hamburg
(photo credit: REUTERS)
Advertisement
The liver plays a critical role in human metabolism; as the gatekeeper of the digestive track, this large organ is responsible for the breakdown of drugs and is therefore the first to be injured due to overdose or misuse. Evaluating this drug-induced liver injury is a critical part of pharmaceutical drug discovery and must be carried out on human liver cells. Unfortunately, human liver cells – called hepatocytes – are in scarce supply as they can be isolated only from donated organs.Now, in research published on the cover of a recent edition of Hepatology, scientists from the Hebrew University of Jerusalem’s Alexander Grass Center for Bioengineering report producing large quantities of functional liver cells from human embryonic and genetically engineered stem cells.“This is quite a revolution for pharmaceutical drug discovery,” said Prof. Yaakov Nahmias, the study’s senior author. “While other groups have been able to produce liver cells before us, their cells showed little functional activity and could not be used reliably for drug discovery. Until now, stem cell-derived hepatocytes showed little ability to predict clinical outcome.”The limited availability of functional hepatocytes for drug testing is a major bottleneck bringing pharmaceutical companies to spend $1 billion per year on liver cells alone.“Our ability to produce an unlimited supply of functional liver cells from human pluripotent stem cells can change all that,” said Nahmias.The breakthrough came with the birth of Nahmias’s baby girl earlier this year.“I watched her feeding just moments after birth, and I realized this was the first time her liver started working. Nobody had thought of mimicking this part of human development before, so that’s exactly what we did.”The team went on to discover that the bacteria populating the infant gut moments after birth produce vitamin K2 and bile acids that activate the fetal liver’s dormant drug metabolism program.The groundbreaking work further demonstrated that liver cells produced from either embryonic stem cells or genetically engineered skin cells can detect the toxic effect of over a dozen drugs with greater than 97 percent accuracy.“The implications for liver biology and drug discovery are quite staggering,” said Prof. Oren Shibolet, head of the liver unit at the Tel-Aviv Sourasky Medical Center, who was not involved in this study. “The method provides access to unlimited amounts of functional liver cells and is likely to critically improve our ability to predict drug toxicity, which was previously limited by the unavailability of liver cells.""Furthermore, as gut bacteria develop differently in infants delivered by Caesarean section, the mode of delivery can possibly affect newborns’ liver maturation. Current practice is to routinely administer Vitamin K to newborns. The data presented suggest that parents abstaining from this practice may cause liver maturation and drug metabolism in their children to develop quite differently.”PREVENTING STOMACH CANCER Targeting the strain of bacteria that causes ulcers may help prevent stomach cancer, according to a new review published in the Cochrane Library. Eradicating Helicobacter pylori bacteria – the main cause of stomach ulcers – with a short course of therapy comprising two commonly used medicines may help to reduce the risk of gastric cancer.Stomach, or gastric, cancer is the third-most-common cause of death from cancer worldwide, and people who are infected with the Helicobacter pylori bacteria are more likely to develop the disease.About two-thirds of humans have H. pylori in their bodies, but in most cases we experience no discomfort or other symptoms. However, it can be wiped out with a simple, short course of antibiotics, often used with another medicine that suppresses the production of gastric acid. To determine whether eliminating H. pylori might reduce the incidence of gastric cancer, researchers analyzed all published randomized controlled trials comparing at least one week of H. pylori therapy, with placebo or no treatment, in otherwise healthy and asymptomatic H. pylori-positive adults. The review included six trials of 6,500 people that followed participants for at least two years and that had at least two participants who developed gastric cancer.The studies mostly used a combination of antibiotics with medicines from a class of drugs that suppress gastric acid production (proton pump inhibitors). An analysis of the studies’ results revealed that combining antibiotics with gastric acid suppressor therapy given for between one and two weeks prevented the development of gastric cancer compared with placebo or no treatment: in the studies, 1.6 percent of those given H. pylori treatment developed gastric cancer compared with 2.4% given no treatment or a placebo. However, the number of deaths from gastric cancer in the trials was low, and there was insufficient evidence to be certain whether eradication improved survival.“The findings of this systematic review and meta-analysis add to the increasing evidence that eradicating H. pylori in the general population has the potential to prevent gastric cancer. International guidelines for the management of H. pylori infection may change as a result,” said co-author Prof. Paul Moayyedi of Canada’s McMaster University.“More research is needed on the extent of this effect and on any potential harms of H. pylori treatment before it can be advocated as a means of preventing gastric cancer.”