Report casts doubt on future of Israeli science and technology 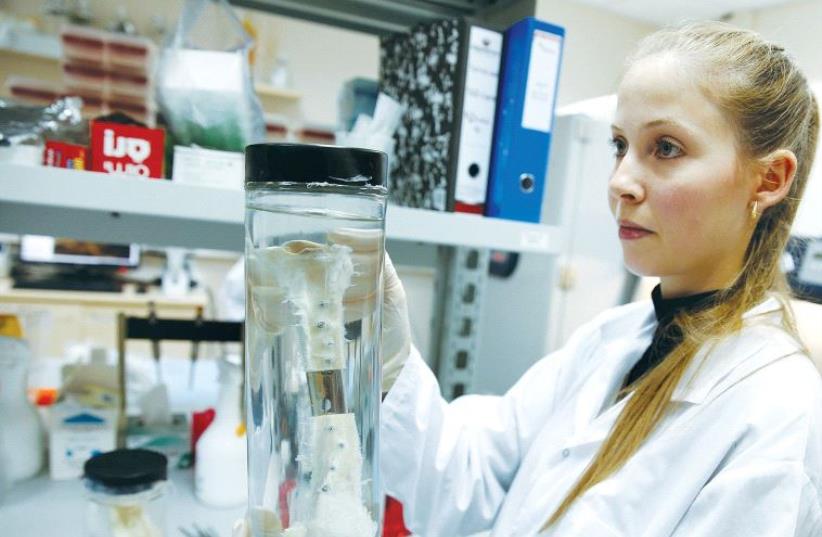 A RESEARCHER in the lab of a biotech firm in Haifa holds a vial containing a bone graft earlier this month
(photo credit: REUTERS)
The state is resting on its laurels from decades ago when it comes to science and technology and the number of Nobel Prize winners. The per-capital rates of scientific papers published has declined from first in the world in the 1980s to No. 30 today.These are among the findings of a new report by the Israel Academy of Sciences and Humanities to the Knesset Science and Technology Committee. The 71-page document also said that university humanities courses and departments are increasingly closing, because students prefer those that lead to well-paying jobs and that investment in scientific infrastructure such as labs and equipment has declined significantly.“This is a very important document that reflects what exists, what we can do and should do,” United Torah Judaism MK Uri Maklev said. “The goal is the future, and the report points to the gap. We know very well the capabilities and human capital that we have and the investment and the resources we allocate for this.Even the crisis in the humanities speaks volumes, as the field is almost gone.”Academy president Prof. Nili Cohen added: “We see the achievements, but also the needs and gaps.Regarding the humanities, the field is vital. It is inconceivable that major research areas of Judaism and knowledge of the history of neighboring countries will disappear.”Zionist Union MK Yael Cohen Paran said, “The report may not be aggressive enough.”The report presented many achievements of Israeli academia over the years, including awards in all fields.It also noted an impressive increase in the participation of women students in graduate studies. But the report also showed gaping holes between Israel and the rest of the advanced world when it comes to investment in science and research and the expensive infrastructure required.Israeli science depends too much on research carried out with scientists in other countries, the report said. It also noted a slowdown in growth of the number of doctoral students over the past decade.Zionist Union MK Manuel Trajtenberg, an economist, urged the deepening of the relationship with academics in China and India, which have invested heavily in science and research.Prof. Alexander Bligh, chief scientist in the Science, Technology and Space Ministry, said: “I join those worried about the situation of infrastructure.Future recipients of Nobel prizes in 30 years must be sitting now in laboratories, and I’m not sure the existing labs are suitable and worthy.”Outgoing academy director Dr.Meir Zadok bemoaned the fact that academics “don’t know how to get along with the political system. We are professionals. MKs can be our messengers.”