Cardiovascular and lipid disorders are the leading cause of death in the US and the second, after cancer, in Israel. 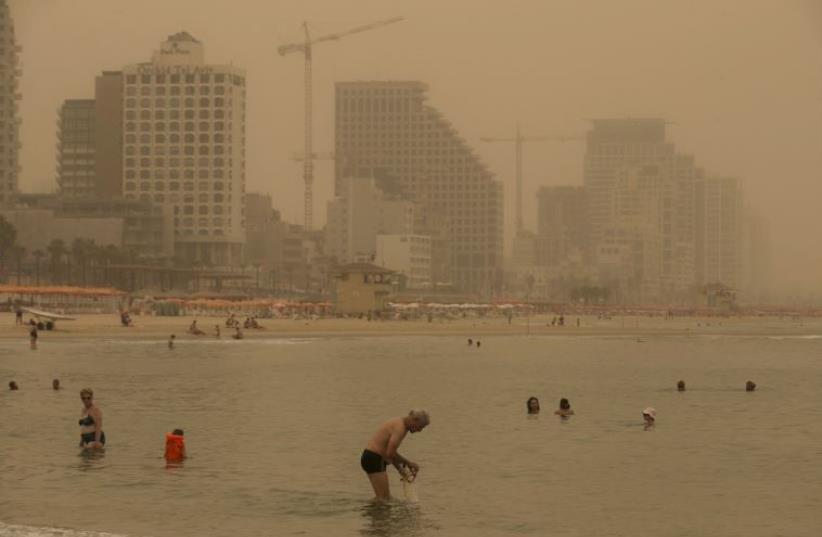 Beachgoers bath at the Mediterranean Sea during a sandstorm in Tel Aviv
(photo credit: REUTERS)
Advertisement
Polluted air causes not only asthma and other respiratory ailments as well as cancers. Now researchers at Soroka University Medical Center and Ben-Gurion University of the Negev in Beersheba have found that intermediate-term (but not short-term) exposure to dirty air may also worsen cholesterol and blood sugar levels – thus posing risk of heart disease -- and especially among type-2 diabetics.The study was just published online in the (American) Endocrine Society’s Journal of Clinical Endocrinology & Metabolism before publication in the print edition.Cardiovascular and lipid disorders are the leading cause of death in the US and the second, after cancer, in Israel. In one year alone, the total cost cardiovascular disease and covering financial loses in the US is $320 billion. The total includes direct costs of treatment as well as indirect costs such as lost productivity.“While air pollution is linked with relatively small changes in cardiometabolic risk factors, the continuous nature of exposure and the number of people affected gives us cause for concern,” said the study’s senior author, Dr. Victor Novack, founder and a head of the Clinical Research Center at Soroka and of BGU. “Even small changes in glucose levels and glycemic control can contribute to increased risk of cardiovascular disease.”The population-based retrospective cohort study examined the effects of air pollution exposure on 73,117 adults living in the south of the country; where particulate matter can rise dangerously due to the influx of dust from deserts in Africa and elsewhere.To assess air pollution, the researchers used daily satellite data on “aerosol optical depth” – how much sunlight was blocked by particles in the air. By examining this and other weather data, the scientists developed a model that allowed them to estimate daily air pollution exposure for each study participant using their address.Researchers analyzed the results of more than 600,000 blood samples taken from the study subjects, who were insured by Clalit Health Services between 2003 and 2012. All of the study participants were known smokers or were diagnosed with diabetes, ischemic heart disease, hypertension or dyslipidemia (which occurs when levels of fats in the blood are too high or low).The study found that participants tended to have higher blood sugar levels and a poorer cholesterol profile when they were exposed to higher average levels of air particulates in the preceding three months compared to those exposed to lower levels of air pollutants. Particulate matter exposure was associated with increases in blood glucose, LDL (“bad” cholesterol) levels and triglycerides (other blood fats). Exposure to particulate matter also was linked to lower levels of HDL (““good”) cholesterol. The associations were stronger for people with diabetes. However, those who were taking medications other than insulin to treat diabetes experienced a protective effect. This group experienced smaller changes in blood sugar and cholesterol levels following air pollution exposure. Although air pollution did not have an immediate effect on blood test results taken within as little as a week of exposure, the researchers found that cumulative exposure over the course of three months was tied to risk factors for cardiovascular disease. “We found an association between air pollution exposure in the intermediate term and undesirable changes in cholesterol,” said the study’s first author, Maayan Yitshak Sade, a BGU master’s of public health graduate. “This suggests that cumulative exposure to air pollution over the course of a lifetime could lead to elevated risk of cardiovascular disease.”
Sign up for the Health & Wellness newsletter >>