Israel’s local Wikimedia affiliate, one of 47 around the world, is leading in several exciting new initiatives. 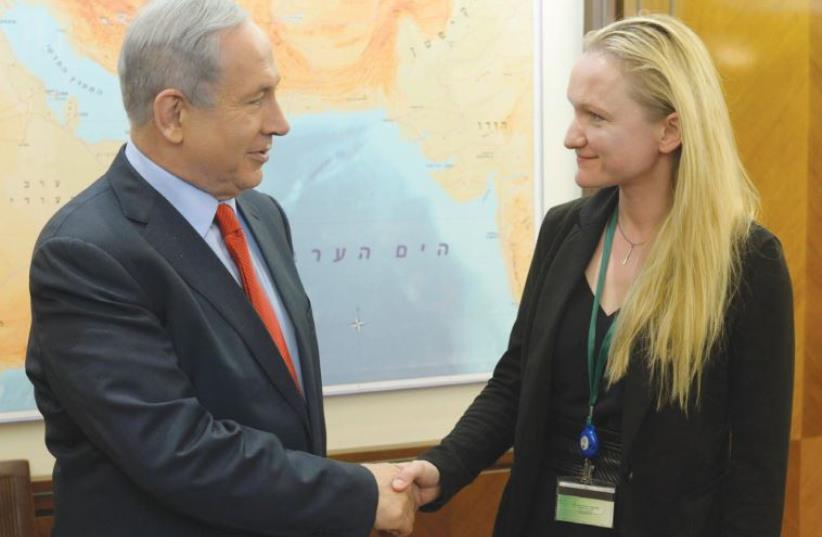 PRIME MINISTER Benjamin Netanyahu meets Wikimedia Foundation executive director Lila Tretikov
(photo credit: GPO)
Advertisement
If you Google “Listen to Wikipedia,” you will come across a nifty webpage that pings various instrument sounds whenever someone in the world edits a Wikipedia page. The symphony of knowledge being entered into the world’s largest encyclopedia, can be sorted by language. Given the paucity of Hebrew-speakers on the planet, the roughly 30 edits made in Hebrew each day adds a rather impressive chorus.That is one of the reasons Lila Tretikov, the executive director of the Wikimedia Foundation--the non-profit that runs Wikipedia--is in Israel. Israel’s local Wikimedia affiliate, one of 47 around the world, is leading in several exciting new initiatives, in fields such as education.“In Israel, this is the first country where we see innovation really happening on the scale where it’s a country-wide program, and that’s in primary education,” Tretikov told the Jerusalem Post in a Sunday interview in the Tel Aviv Wikimedia Israel office. She referred to a program aiming to teach gifted youth research skills by teaching them to edit Wikipedia. A group of advanced 7th graders in Hertzliya were tasked with writing about their city and it history, and their final product, complete with citations, was submitted to the website (following teacher approval). The students, who admittedly did not know quite where to start their project given that there was no Wikipedia entry on the subject, earned the praise of Hertzliya’s mayor for their efforts. Similar programs were going on in around 15 different cities around the country, with eyes on expanding.“The best teachers teach with Wikipedia. It’s a difficult but important way to to think and write,” Tretikov, noting that the process of writing and editing Wikipedia articles, with all the peer-editing and questioning involved, is rigorous.Israel’s Wikipedia community has stood out in other ways as well. While the number of active wikipedia editors in many countries plunged a few years ago, Israel’s remained steady. One possible reason is that nearly three years ago, the community adopted a visual editing tool that made editing articles much simpler. ”The community is faster at adopting things here,” Tretikov said.In the US, for example, they have still not adopted the new editing tool, meaning that first-time editors are confronted by a wall of code that can sometimes be daunting.That’s one of the reason some people theorize there’s a gender imbalance among Wikipedia editors, which are roughly 85% male. In a May interview with the Jerusalem Post, Wikipedia co-founder Jimmy Wales noted that the community of editors reflected the demographics of “computer geeks.” Some studies have suggested that men are more willing to wade into the technobabble of coded pages than women, which may account for part of the disparity.In Israel, where the friendlier editing tool has been available for some time, the proportion of women editors is about ten percentage points higher than average.Israel will also be one of the first places to get a special translation tool to help recreate Wikipedia content in different languages. The tool will help editors translate Wikipedia pages between Hebrew and Arabic, which could mean the Arab world will soon be reading Wikipedia articles made in Israel.Tretikov will have plenty more innovations to look forward to when she returns to Israel next April. Wikimedia Israel just won the bid to host the international group’s next annual hackathon--the first to be hosted outside North America or Europe.