Shlomo Grofman, who was recently appointed honorary consul of Kenya in Israel, hopes for annual trade volume between the countries to jump from $100 million today to $500m. in three years. 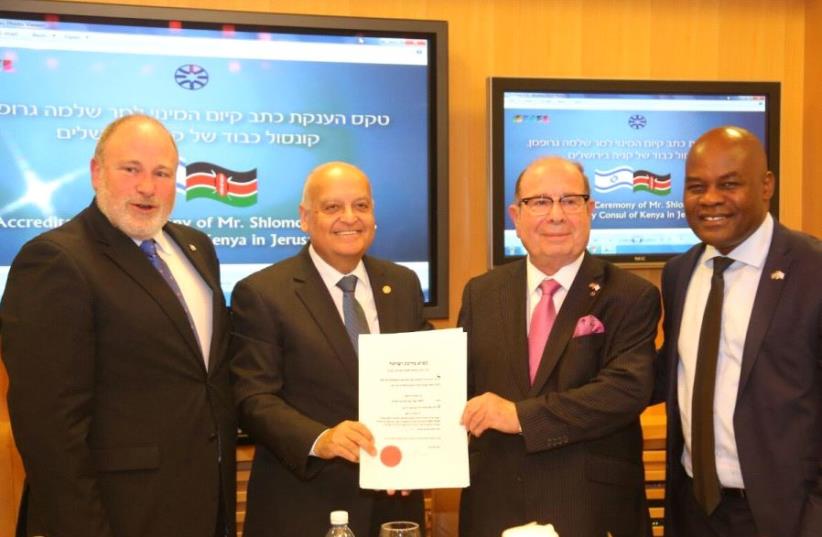 Shlomo Grofman receiving the title “honorary consul of Kenya in Jerusalem,” at a diplomatic ceremony held in the Foreign Ministry
(photo credit: Courtesy)
Advertisement
As Israeli companies increasingly eye Kenya as an attractive environment for commerce, a businessman turned honorary diplomat aims to quintuple trade volume between the countries in just three years.Shlomo Grofman, who was recently appointed honorary consul of Kenya in Israel, intends to intensify Israeli-Kenyan business partnerships, aiming for annual volume between the countries to jump from $100 million today to $500m. in three years. In addition, he hopes to launch a direct flight route between the two countries as part of the effort to expand partnerships among companies in both places.“Opening a direct flight will result in three years in an increase in the trade volume between Israel and Kenya that is five times today’s trade volume, which currently stands at $100m. per year, and will enable dozens of Israeli companies in the fields of safety, health, hi-tech and agriculture that are very interested in doing so to operate in Kenya,” Grofman said.Over the weekend, Grofman received the title “honorary consul of Kenya in Jerusalem,” at a diplomatic ceremony held in the Foreign Ministry, attended by a variety of ministry officials and Israeli diplomats, as well as representatives from the Kenyan Embassy.Grofman has served in a number of pioneering roles in the real estate industry in Israel, including as CEO of Africa Israel Investments Ltd. for 17 years – until the company’s acquisition by Lev Leviev in 1996.Today, Grofman is co-owner and co-chairman of the Faire Fund (First American Israeli Real Estate Fund), as well as chairman of Sarel Medical Supplies and Equipment Ltd. and a member of the Israel-America Chamber of Commerce, among other positions.Although Israel and Kenya have had diplomatic relations for more than 50 years, the Kenyan Embassy is small, and pushing business collaborations forward has been difficult without an honorary consul in place, according to Grofman.“But the main push for strengthening the ties between the two countries was the visit of President [Uhuru] Kenyatta in Israel just recently and the visit of [Prime Minister Benjamin Netanyahu,” he told The Jerusalem Post on Sunday afternoon.Grofman was referring to Kenyatta’s trip to Israel in February 2016, followed by Netanyahu’s visit to several East African countries, including Kenya, in July.Netanyahu’s trip to Africa marked the first Israeli prime minister’s visit to the continent in 50 years, while Kenyatta was the first Kenyan president to come to Israel since Daniel Moi in 1994.Following Kenyatta’s visit to Israel, he insisted on the need to appoint an honorary consul in Jerusalem, after being impressed by the interest of Israeli companies in his country, Grofman explained.Grofman said he has already held meetings with Israeli companies that would like to do business in Kenya, as well as with Kenyan companies that are interested in coming to Israel. He is in the process of organizing missions for business delegations from each country to visit the other.While Grofman’s focus will largely be business-to-business, he stressed that he is happy to be at the disposal of the two governments to strengthen relations. In addition, he said that members of academic world in the two countries have expressed interest in collaborations.As far as a direct flight route from Nairobi to Tel Aviv is concerned, Grofman said he has already met with the management of El Al and Kenya Airways.“It’s not an easy project because it needs the approval of the Israeli security situation, but it’s going to be via Open Skies,” he said. “It’s a process, but we have started already.“I really hope that in the very near future we will be able to announce the renewal of the [direct route] between the two countries,” Grofman said.