The Sol Chip Comm, created by the Haifa-based Sol Chip, is a tiny wireless tag fueled by the sun’s light that can connect to a virtual cloud. 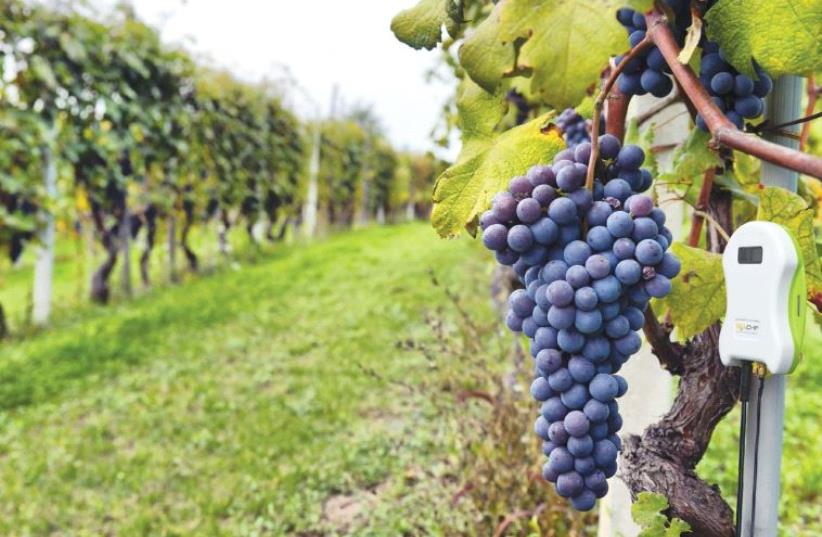 THE TAG will first be used in farms that grow more pricey fruits, such as grapes, or in those that cultivate their produce in greenhouses
(photo credit: SOL CHIP)
Advertisement
As farmers increasingly employ automated sensors to remotely monitor soil and irrigation properties, they may soon be able to take the art of precision agriculture one step further – with the forthcoming launch of a tiny, solar-powered wireless device.The Sol Chip Comm, created by the Haifa-based Sol Chip, is a tiny wireless tag fueled by the sun’s light that can connect to a virtual cloud and enable the autonomous operation of a variety of agricultural sensors.While potentially applicable to other fields, such as smart city or smart grid management, the device is particularly designed to feed real-time data readings from hundreds of farming-related sensors, according to the company.“Almost everywhere, the know-how of how to get better yield of crops is [becoming] important,” Shani Keysar, CEO of Sol Chip, told The Jerusalem Post on Monday. “Another thing is the shortage of water is getting harder in many places.”“You find more attraction to having these kinds of units,” she added.Among the sensors that the tag might connect to are those that monitor soil moisture, ambient temperature, air temperature and nutrient levels. The device gathers the data collected by these sensors for analysis by precision applications, in order to make data-driven adjustments for optimizing water and fertilization consumption, as well as for improving crop yields, information from the company explained.“The uniqueness is that our solar battery is very small and efficient,” Keysar said. “The whole size of this [device] is remarkably small.”While solar powered wireless tags for agriculture do already exist, they are typically much bigger and involve the use of a cumbersome, external solar panel, Keysar explained. The Sol Chip Comm, on the other hand, is an “all-in-one product” with greater overall efficiency and a more attractive price, she said.At just 13x8x4 cm., the device is able to fit unobtrusively into most agricultural environments and is built to operate for 10 years with no maintenance requirements, according to the company. The tag currently has a range of about 1.5 km., but in the future will be able to reach around five to 10 km., Keysar said.“Because everything is integrated and very small in one box, it can be very efficient in environmental conditions,” she continued, noting that the system can withstand tough weather and flooding.For the past year, Sol Chip has been conducting pilot tests of the device in a variety of countries, including Spain, China, Singapore, Argentina and Israel.In China, the device was able to survive a snowstorm, Keysar said.At first, Keysar said she expects to see the tag being employed in farms that grow more pricey fruits like grapes or in those that cultivate their produce in greenhouses – only trickling down to the more common crops later on. Meanwhile, Sol Chip will be selling the device for now to infrastructure integrators, rather than directly to the farmers themselves.“As a new technology, we think that first it will penetrate the more expensive crops and plants,” she said. “This is very typical.”The device is being launched as part of a full kit – including two solar tags, two sensors, a wireless gateway, all the necessary accessories, access to third party web server and support – at this week’s Irrigation Show in Las Vegas, Nevada.