Why are pro-Israel portfolios investing in Israel’s foes?

Any investor in emerging markets is ‘getting exposure to stocks in hostile countries,’ Steven Schoenfeld, founder of BlueStar Indexes, tells ‘Post’ 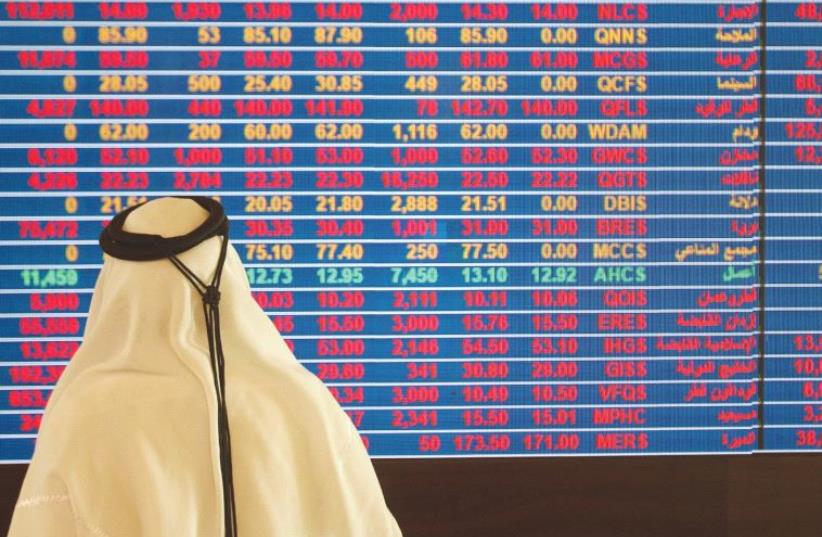 A TRADER monitors stock information at the Qatar Stock Exchange in Doha
(photo credit: REUTERS)
Advertisement
Many Jewish and pro-Israel investors would be shocked to learn that their investment portfolios include an allocation to Hamas-sponsor Qatar. But whether they realize it or not, many pro-Israel investors dedicate a portion of their assets to countries like Malaysia, the United Arab Emirates, Pakistan and other countries hostile to Israel.Over the last year, countries like Qatar and the UAE became more prominent in investors’ portfolios due to the rise of their share in emerging market benchmarks in indexes around the world. In September, Qatar which also owns the anti-Israel Al Jazeera network, entered the FTSE Emerging Market benchmark along with Pakistan.“Any investor, Jewish or otherwise, who is investing in emerging markets is getting exposure to stocks in hostile countries, unless they do something explicitly to avoid it. This is just a fact. It doesn’t mean they are doing it intentionally,” Steven Schoenfeld, founder and CIO of BlueStar Indexes, told The Jerusalem Post.BlueStar Indexes is a New York Citybased financial firm that specializes in developing and managing indexes with a focus on the Israeli capital markets. Blue- Star manages a family of indexes for Israeli equity, with companies in diverse fields that are listed on stock markets in London, New York, Singapore, Tel Aviv and Sydney. These include an Israeli tech-specific index. According to BlueStar, their mission is to provide global institutional and retail investors with investment strategies for efficiently accessing the full range of Israeli asset classes.Jewish communities in America, Canada and the United Kingdom have endowments or charitable foundations.Through these funds, they invest around the world the same as a university endowment or a pension fund would. The same goes for Israeli insurance companies or individual investors who are Israeli, Jewish or just pro-Israel.Diversifying one’s portfolio to include international indexes and investment in emerging markets is not only highly recommended, but could be very profitable.Now, however, it puts these investors in risk of inadvertently making investments that are contrary to their own values and stated goals.“Investors should look under the hood of their portfolios and determine if their portfolio is aligned with their values.Otherwise it’s rather ironic that Jewish endowments and foundations who would launch an emergency campaign to support Israel during battle with Hamas are also investing in the country that funds it,” said Schoenfeld.Usually, when a private or institutional investor wishes to gain exposure to emerging markets they simply buy a fund which is managed in New York or London, often tracking an emerging market index. These indexes often include the UAE and Malaysia, and now growingly Qatar, countries which are not friendly to Israel.In the US alone, adding up the funds of the Jewish federations, the Jewish family foundations, and organizations like the American Friends of Hebrew University, the Technion-Israel Institute of Technology, and Magen David Adom accumulates to more than $40 billion in invested funds. According to Schoenfeld, these funds are now more heavily invested in hostile countries’ stocks than in Israeli stocks.“For some investors this often means three or four times more than Israel. We think this is incongruous and should be addressed. At least have as much exposure to Israel as you have to the enemies of Israel,” Schoenfeld told the Post.According to BlueStar, this disconnect can be remedied with a proactive effort to “actively weight” Israel and “underweight” the anti-Israel elements found in Jewish communal investments. Aside of simply being the right thing to do for investors with pro-Israel values, BlueStar also added that incremental exposure to Israeli equities and Israel bonds has historically improved risk-adjusted returns in globally diversified portfolios, and it is the best antidote to the BDS movement.“Take a small percentage of your overall fund and allocate it to Israeli stocks.Not as charity, not primarily motivated by supporting Israel, but because Israel has been a good investment – if in doing so it also aligns with your values or an organization’s mission, that’s a bonus,” Schoenfeld explained.