Catholics should not try to convert Jews, Vatican says in landmark document

Christianity and Judaism are intertwined and God never annulled his covenant with the Jewish people, document reads. 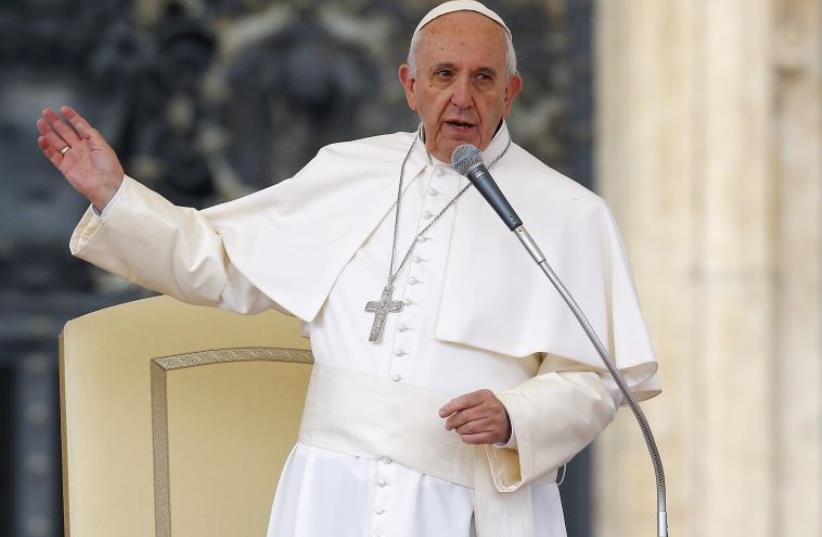 Pope Francis talks as he leads the weekly audience in Saint Peter's Square at the Vatican
(photo credit: REUTERS)
Advertisement
Catholics should not try to convert Jews and should work with them to fight anti-Semitism, the Vatican said Thursday in a major new document that drew the Church further from the strained relations with Judaism of the past.The document, “A Reflection on Theological Questions Pertaining to Catholic-Jewish Relations,” was issued by the Pontifical Commission for Religious Relations with the Jews, and approved by Pope Francis. It says Christianity and Judaism are intertwined, and that God never annulled his covenant with the Jewish people.“The Church is, therefore, obliged to view evangelization to Jews, who believe in the one God, in a different manner from that to people of other religions and world views,” it said.“In concrete terms, this means that the Catholic Church neither conducts nor supports any specific institutional mission work directed toward Jews,” said the document, adding that there was a “principled rejection of an institutional Jewish mission.”It also said Catholics should be particularly sensitive to the significance to Jews of the Holocaust and pledged “to do all that is possible with our Jewish friends to repel anti-Semitic tendencies.”“A Christian can never be an anti-Semite, especially because of the Jewish roots of Christianity,” it said.The document coincided with the 50th anniversary of a revolutionary Vatican statement that repudiated the concept of collective Jewish guilt for Jesus’s death.Until about 1960, prayers at Catholic Masses on Good Friday, the day commemorating the death of Jesus, labeled Jews “perfidious” and called for their conversion.That prayer was eliminated from general use after the 1962-1965 Second Vatican Council introduced a new missal, or prayer book used at Masses.In 2008, former Pope Benedict further reformulated the prayer used by the traditionalists to remove language Jewish groups found offensive, such as “the blindness of that people.”Thursday’s document said Catholics should “bear witness to their faith in Jesus Christ also to Jews,” but that they should do so in “a humble and sensitive manner, acknowledging that Jews are bearers of God’s word...”Rabbi David Rosen, the International Director of Interreligious Affairs for the American Jewish Committee, welcomed the new Vatican document.Rosen and Dr. Edward Kessler of Cambridge University were invited to provide Jewish responses to the document following the approval of the document in the Vatican.They joined Cardinal Kurt Koch and Father Norbert Hoffman, secretary of the Pontifical Commission for Religious Relations with the Jews, in addressing reporters.“Nostra Aetate revolutionized Catholic teachings about Jews and Judaism,” said Rosen.“The new ‘Reflection’ document clearly repudiates replacement or supersessionist theology and expresses an increasing appreciation and respect for Jewish self-understanding, reflected in recognizing the place of Torah in the life of the Jewish people,” said Rosen.However, the rabbi expressed disappointment that the new document fails to acknowledge “the centrality that the Land of Israel plays in the historic and contemporary religious life of the Jewish people,” and the groundbreaking role of Nostra Aetate in leading to the diplomatic accord between the Vatican and Israel.“The establishment of full bilateral relations between the State of Israel and the Holy See – very much guided and promoted by Saint Pope John Paul II – was one of the historic highlights on the road since Nostra Aetate, reflecting more than anything else the fact that the Catholic Church had truly repudiated its portrayal of the Jewish people as condemned wanderers to be homeless until the final advent,” Rosen said.“Without Nostra Aetate, the establishment of these relations would surely not have been feasible,” Rosen added.He praised the new document’s emphasis on the responsibility of educational institutions, particularly those that train priests to integrate into their curricula both Nostra Aetate and subsequent Holy See documents pertaining to Jews and Judaism.“This remains the most notable challenge in taking the achievements from their Olympian heights down to the grassroots universally,” he said.
Sign up for our Christian World newsletter >>