By ARIEL COHEN
MARCH 16, 2015 18:22
ISIS Vandalizes Churches In Iraq
(photo credit: COURTESY MEMRI)
Advertisement
As the Islamic State continues their violent assault on the Christians in the Middle East, the terrorist group released a series of images showing militants vandalizing churches in Ninawa, Iraq on Monday.The men are shown removing crosses from Iraqi churches and replacing the religious symbol with the black flag of the Islamic State. The men are also seen destroy church relics, paintings statues and gravestones. 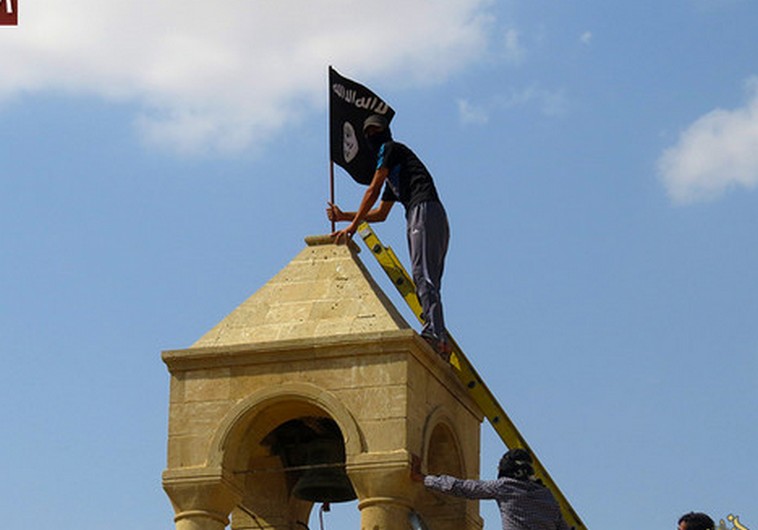 ISIS destroys church (courtesy MEMRI)Unlike most images released by the Islamic State in which the militants are covered in masks and wear dark robes, the men destroying the churches wear civilian clothes and could be easily identified.This vandalization occurs amongst a series of assaults against Christians in the Middle East. In February the Islamic State decapitated 21 Egyptian Christians on the shores of Libya, and last month, the militant group kidnapped over 220 Assyrian Christians. Due to Islamic State violence in both Iraq and Syria, thousands of Christians have fled their homes in fear  and are now living as displaced persons in the surrounding region.Cross comes down (coutesy MEMRI)As evidenced by these acts of vandalism, the Islamic State does not limit their attacks on Christianity to terrorizing members of the faith. ISIS destroyed Jonah’s tomb in Mosul, Iraq in July and destroyed countless Assyrian artifacts in Nimrod this March. The jihadist organization believes that Christian relics represent both a polytheistic and idolatrous religion, and thus, are an assault on Islam.sign up to our newsletter