By YAAKOV LAPPIN, JPOST.COM STAFF
Smoke rises after an IAF airstrike in Gaza 311 (R)
(photo credit: Ronen Zvulun/Reuters)
Advertisement
The Israel Air Force pounded the Gaza Strip on Tuesday morning, bombing 34 targets in Rafah in response to a barrage of rockets that struck Israel’s South on Monday.Thirty-two targets in a Hamas compound in Rafah, in the southern Strip, were struck, including a command center, residential structures and a weapons storage facility. Islamic Jihad targets were also hit.On Tuesday evening, two Palestinian rockets exploded in the Eshkol region, in open areas.A few hours before the Israeli strikes, Gazan terrorists had fired four rockets at southern Israel. The projectiles struck in open areas north of Sderot. One of the rockets started a blaze in a field that firefighters extinguished, and another damaged a road.Palestinian media reported several power outages throughout the Gaza Strip following the air strikes. “If Hamas’s aim is to escalate, we will act accordingly,” a senior security source said, warning that an increase in Gazan rocket fire would be met with an augmented Israeli air campaign. Security quiet would be met with a similar response from Israel, the source added. 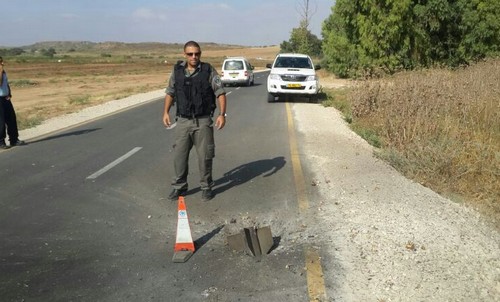 Hamas warned Israel on Monday against waging war, saying this would “open the gates of hell” on Israel. Hamas spokesman Sami Abu Zuhri said that Israel bears responsibility for the latest escalation.
The events come after the military operation launched to locate teenagers Gil-Ad Shaer, Naftali Fraenkel, and Eyal Yifrah reached a tragic end Monday afternoon when security forces discovered their bodies buried in a field northwest of Hebron, no more than a 10-15-minute drive from where they were abducted.Jerusalem Post staff contributed to this report.