Oskar Groening was 21, and by his own admission an enthusiastic Nazi when he was sent to Auschwitz in 1942. 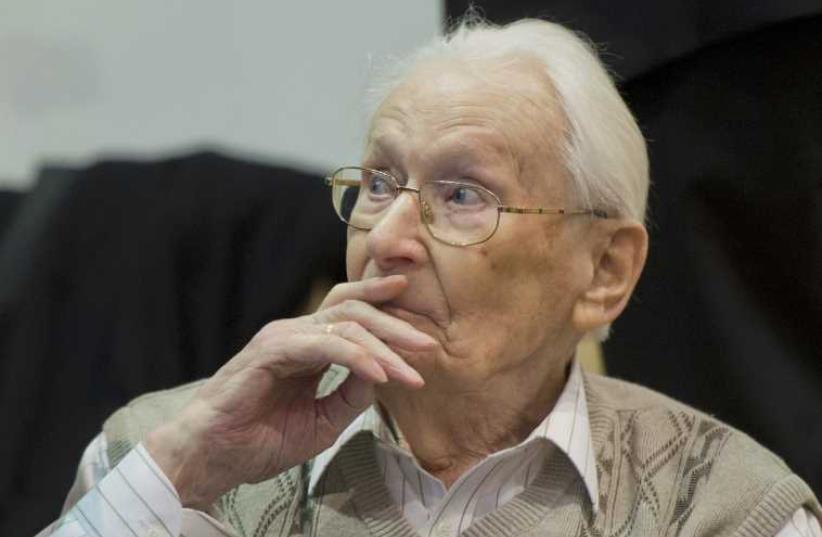 Auschwitz bookkeeper
(photo credit: REUTERS)
A 93-year-old former bookkeeper at Auschwitz who is accused of assisting in the mass murder of Jews told a German court that he felt morally guilty for his work at the Nazi death camp, describing in detail the grisly killings he had witnessed there.Oskar Groening, in what could be one of Germany's last big Holocaust trials, is accused of being an accessory to the murder of 300,000 people although in his role as a clerk he did not kill anyone himself."In moral terms, my actions make me guilty," Groening said on the first day of his trial in the northern town of Lueneburg."I stand before the victims with remorse and humility," he said. "On the question of whether I am guilty in legal terms, you must decide."Groening was 21, and by his own admission an enthusiastic Nazi, when he was sent to work at Auschwitz in 1942. His case is unusual because unlike many of the other SS men and women who worked in concentration camps, he has spoken openly in interviews about his time at the camp in occupied Poland.Wearing a sleeveless beige sweater over a white shirt, the white-haired Groening appeared calm and composed, leaning back in his chair and looking at papers, as prosecutors read out the indictment, which included graphic descriptions of how Jews were exterminated.He laughed after his lawyer asked the judge to speak louder so that Groening could hear. At one point, taking a sip of water, he joked: "I'll do that like I drank the vodka at Auschwitz."Groening's job was to collect the belongings of deportees after they arrived at the camp by train and had been put through a selection process that resulted in many being sent directly to the gas chambers.He inspected their luggage, removing and counting any bank notes that were inside, and sending them on to SS offices in Berlin, where they helped to fund the Nazi war effort."By sorting the bank notes he helped the Nazi regime to benefit economically," said Jens Lehmann, a lawyer for a group of Auschwitz survivors and relatives of victims who are joint plaintiffs in the case.SURVIVORSThe trial has attracted major media interest, drawing dozens of reporters from outside of Germany. Auschwitz survivors, who are plaintiffs in the case, traveled from the United States, Canada, Hungary and elsewhere to attend.Among them was Eva Mozes Kor, 81, who along with her twin sister Miriam, was subject to human experiments by Auschwitz doctor Josef Mengele, known as the "Angel of Death." Her parents and two older sisters died in the camp."It didn't stop with the end of Hitler," she said of the emotional pain from Auschwitz. "You couldn't just turn off a button and start a new life."Max Eisen, an 86-year-old resident of Toronto, said he was "very disappointed" with Groening's testimony."There are a lot of untruths here," said Eisen, whose parents, three siblings, grandparents, aunt and uncle were all killed at the camp. "It needs to be written somewhere that he committed a crime. To let him get away with it would be bad."Thomas Wulff, a prominent right-wing extremist in Germany, stood outside the court wearing a military-style cap during the first part of the trial surrounded by police. Onlookers had shouted 'get lost' earlier.The case goes to the heart of the question of whether people who were small cogs in the Nazi machinery, but did not actively participate in the killing of 6 million Jews during the Holocaust, are guilty of crimes. Until recently, the answer from the German justice system was no.In past years, prosecutors in Frankfurt decided not to pursue the case against Groening and other concentration camp workers, saying there was no causal link between their actions and the killings that occurred around them.Prosecutors in Hanover disagreed, emboldened by the case of Ivan Demjanjuk, who in 2011 was convicted of being an accessory to mass murder despite there being no evidence of his having committed a specific crime while a guard at the Sobibor extermination camp."It is certainly not an easy trial for us," the judge Franz Kompisch told the court. "This is a trial which is attracting and creating a lot of attention and setting off emotions."The charges against Groening relate to the period between May and July 1944 when 137 trains carrying roughly 425,000 Jews from Hungary arrived in Auschwitz. At least 300,000 of them were sent straight to the gas chambers, the indictment says.SCREAMSGroening described some of the murders that he witnessed at Auschwitz. On his first day on the ramp where Jewish prisoners exited the trains, he saw an SS colleague grab a crying baby and slam its head against a truck until it was quiet."I was so shaken," Groening said, adding that at the time he told a superior: "I don't find what he did good at all." Groening told the court that he later asked his commander for a transfer from Auschwitz.He also told of an incident in late 1942 when he witnessed Jews being herded into a converted farm house near the camp. An officer shut the door, put on a gas mask, opened a can and poured its contents down a hatch."The screams became louder and more desperate but after a short time they became quieter again," Groening said."This is the only time I participated in a gassing," he added, before correcting himself: "I don't mean participated, I mean observed."In an interview with German magazine Der Spiegel in 2005, Groening said he felt "nothing" when he saw Jews being taken to the gas chamber."If you are convinced that the destruction of Judaism is necessary, then it no longer matters how the killing takes place," he said, describing his feelings as a young SS officer.