Since Abiy took office last year, he has backed the release of political prisoners, removal of bans on political parties, and prosecution of officials implicated in human rights abuses. 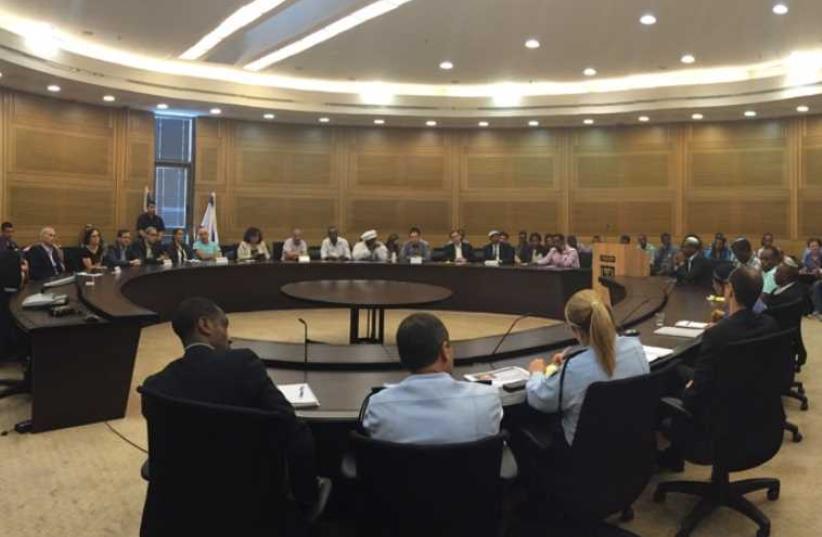 Emergency Knesset meeting to address Ethiopian-Israeli community needs, May 12th
(photo credit: Courtesy)
Advertisement
Ethiopian-born MKs expressed their grief for the four Ethiopian officials killed on Saturday during two attacks in which a general attempted to seize control of the northern state of Amhara. Army chief of staff Seare Mekonnen and another retired general were shot dead in Mekonnen’s home by a bodyguard. A separate but related attack left state president of Amhara Ambachew Mekonnen and his adviser dead, and the state attorney-general wounded.The office of Prime Minister Abiy Ahmed stated that Amhara security head General Asaminew Tsige instigated the attacks in an effort to seize control of Amhara, where ethnic tensions have been increasing as the country undergoes unprecedented political and military reform.
Since Abiy took office last year, he has backed the release of political prisoners, removal of bans on political parties, and prosecution of officials implicated in human rights abuses.“There [are] a lot of Ethiopians that admire Abiy Ahmed, who is trying to bring Ethiopia to a new period of time,” said Pnina Tamano-Shata, the first Ethiopian-born woman elected to the Knesset, who immigrated to Israel in 1984 as part of Operation Moses. “It has not been easy for him. We are hoping that everything will be alright.”The news has brought renewed urgency to the ongoing effort of facilitating the immigration of Ethiopian Jews to Israel. Gadi Yevarkan, an Ethiopian-born MK elected to the Knesset in April, said Israelis “who have family in Ethiopia are worried.”According to Yevarkan, the heightened tensions should warrant an analogous response as “every person that the Israeli government has deemed entitled to immigrate to Israel must be able to immigrate immediately.” Although confident of the correct approach, Yevarken noted his doubts adding, “I don’t know if I can say this will happen, but I know I am pushing for it to happen.”For Yevarkan, concern over the unrest in Ethiopia follows a moment of triumph, when successful negotiations between Israel and Ethiopia led to the release of Menashe Levy, an Israeli citizen detained in Ethiopia for more than four years following an indictment for tax evasion. According to Levy’s family, with whom the MK has been in contact, Levy suffered from violent assault from another inmate while imprisoned.“Ethiopia has a special place for me, and therefore, everything that occurs there concerns me,” Yevarkan said. “What happened with the attempted coup is very hard, but I am sure that the Ethiopian nation will prevail over what happened yesterday. She has existed independently for more than 3,500 years, she has overcome difficult wars, more difficult than what has happened now, and therefore I am filled with hope and prayer that she will return to greatness.”