"Perhaps it wasn't an accident that the pendant fell through the floorboards, maybe it was Karolina's purpose... that the discovery of the pendant would reunite the family."

Memorial for Karolina Cohn, child holocaust victim in Frankfurt on November 13, 2017. (Tamara Zieve)
Advertisement
FRANKFURT – “It’s like a version of The Da Vinci Code,” said Sonya Heineman Kunkel, one of dozens of relatives of child Holocaust victim Karolina Cohn, who was memorialized on Monday by “stumbling stones” laid in front of the family’s last known address in Frankfurt.An initiative of German artist Gunter Demnig, the stumbling stones – also known as stolpersteine – are covered by brass plates inscribed with the names and dates of birth and death of victims of Nazi extermination or persecution. 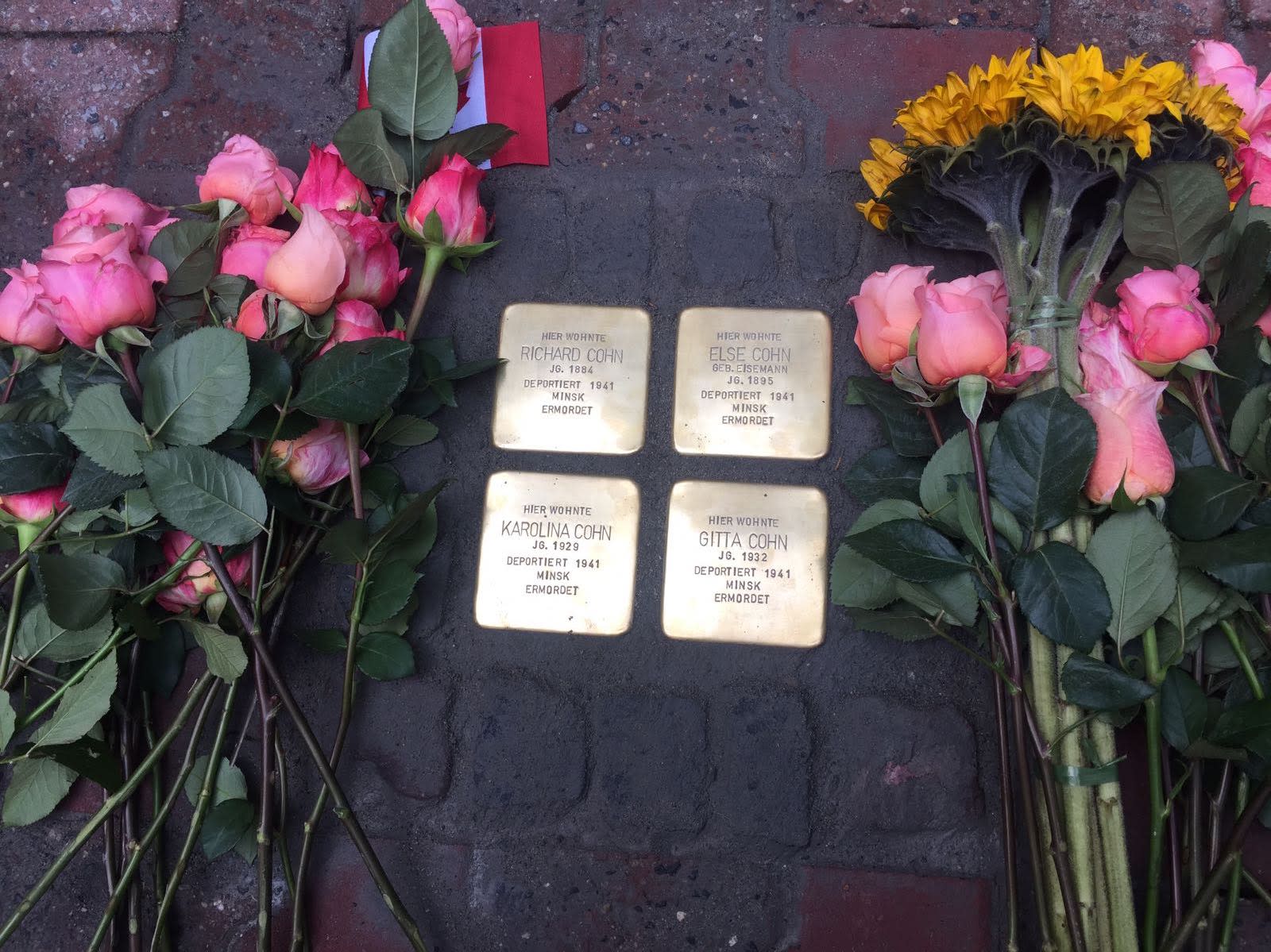 A memorial for Karolina Cohn and other members of her family who perished in the holocaust (TAMARA ZIEVE)
Thousands of stones of this kind have been laid across Europe in remembrance of Holocaust victims. On the stones for the Cohns are the names of Karolina, her sister, Gitta, and her parents, Richard and Else Cohn.The reunion of dozens of relatives, who traveled to the ceremony from across the world to honor the memory of relatives they previously knew nothing about, followed a chain of events that began with the discovery of an unusual pendant at Sobibor death camp.The pendant, which bore a close resemblance to one owned by Anne Frank, was discovered by Polish archeologist Wojciech Mazurek, Israel Antiquities Authority archeologist Yoram Haimi, and their Dutch colleague Ivar Schute.Karolina’s pendant was found alongside other personal items, which archeologists believe were removed by Holocaust victims before being sent to the gas chambers.The items were found at the location believed to be where victims were forced to undress and have their heads shaved before being murdered.The discovery of the pendant set off genealogical research by Jerusalem- based entrepreneur Chaim Motzen, who swiftly managed to trace the surviving members of Karolina’s family. 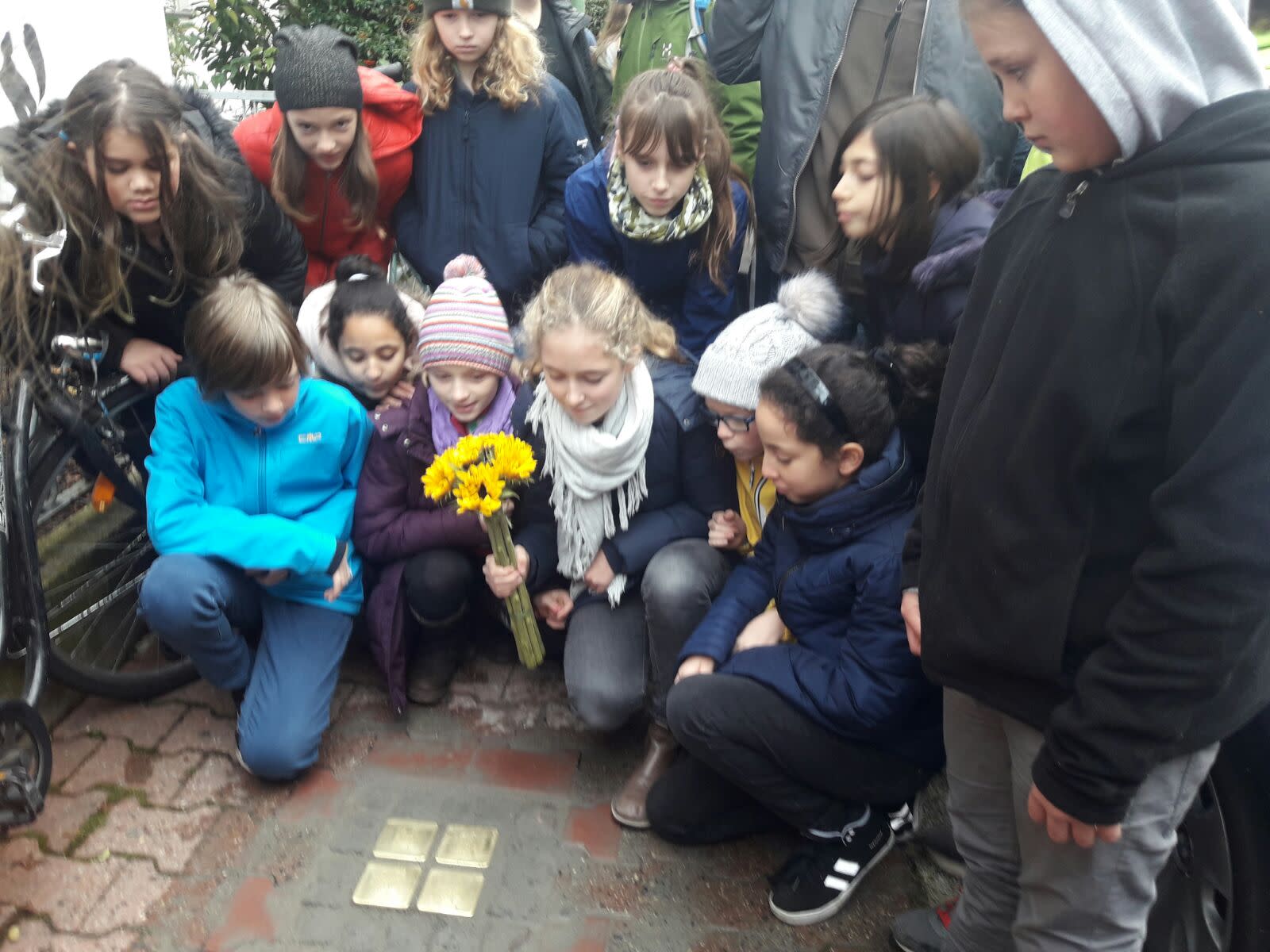 School children visit the memorial for Karolina Cohn and her family, all victims of the holocaust (TAMARA ZIEVE)
“It became this worldwide interesting hunt,” Kunkel told The Jerusalem Post.Kunkel is the daughter of Ernst Ludwig Heineman, the son of Karolina’s cousin Irene Bruckmann Heineman. Heineman left Germany for the US and now lives in Connecticut.“It’s like making a puzzle – you put it together and then you understand more, what it means” Heineman said. “I’m glad I came.”“It’s really amazing to be here in her [Karolina’s] hometown and to feel her presence, that she walked on these streets,” said Molly Bruckman, great-granddaughter of Richard Cohn’s brother, Sigmund Bruckmann.Molly Bruckman’s cousin Cynthia Bruckman said she was moved to tears by the ceremony, which was sponsored by the Claims Conference, which also funds the Yad Vashem database that enabled the researchers to find the pendant’s owner.Bruckman said she was particularly touched by the words of Greg Schneider, executive vice president of the Claims Conference, who spoke of the family’s “sacred obligation” to remember Cohn.“Sometimes, I imagine that Karolina dropped it purposefully between the floorboards as she prepared for death, hoping that clue would survive even if she didn’t,” Schneider told the gathering.“That, someday, a road map of her life would be discovered... that from the ground, she was calling to us to embrace her. We were all denied the details of her life, just as she was denied to live her life.” 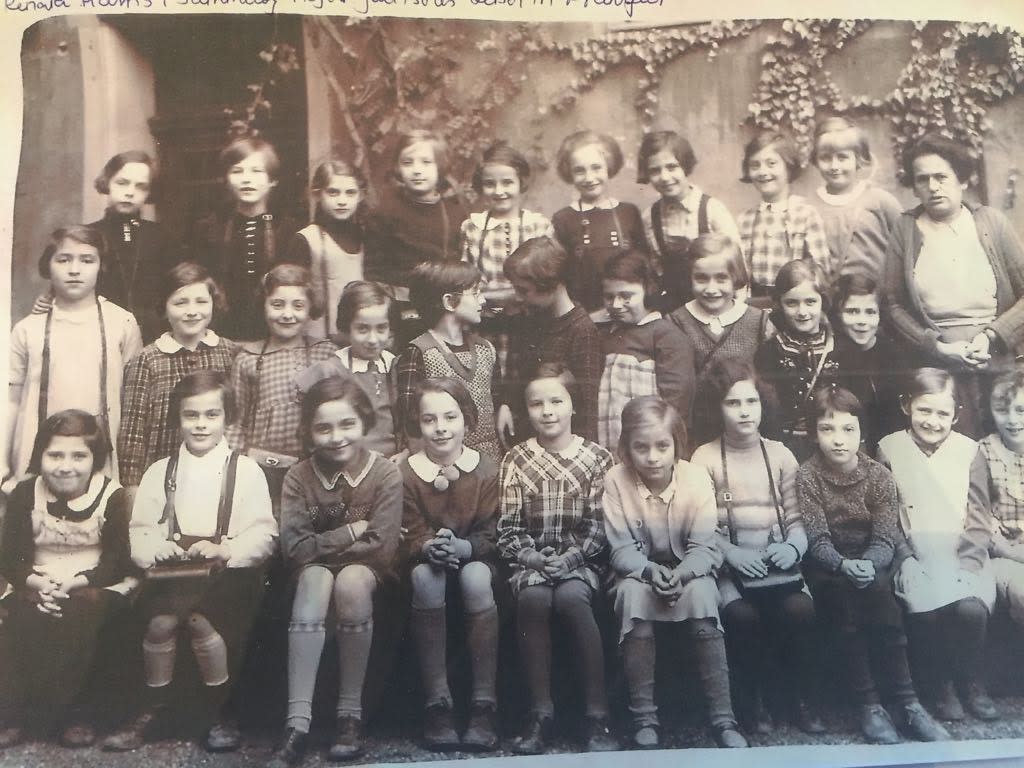 What may be Holocaust victim Karolina Cohn's class picture from 1936 (TAMARA ZIEVE)
Schneider continued: “You see the Nazis tried to destroy her – her body, her relatives, even the memory of her. Her existence was meant to go up as flames, as even she likely did, and for sure her family, friends and community did. And so to deny the Nazis the victory, even 76 years later, as we stand here today, we must never forget.”Relatives came from far and wide, including members of one family who traveled from Hong Kong, where they now live.Shima Shimizu’s mother, a cousin of Karolina, received a phone call in January from a relative in the US who told her the story.“It didn’t really hit me at the time. I didn’t really understand what it meant,” Shimizu told the Post. “I grew up in Japan... and it wasn’t something that was close to me.But then knowing that... our family...went through this is a surreal feeling.”“The discovery of the pendant was profound,” Barry Eisemann said at an event following the stumbling stones ceremony held at Philanthropin, a Jewish school in Frankfurt. Eisemann is a cousin of Karolina who lives in Arlington, Virginia. “This small piece of metal connects us to our families, past and present,” he said.“Perhaps it wasn’t an accident that the pendant fell through the floorboards. Maybe it was Karolina’s purpose... that the discovery of the pendant would reunite the family,” he said, echoing Schneider’s remarks.Many of those in attendance spoke of how they were indebted to the archeologists who found the pendant, and to Motzen, who tracked them all down and subsequently brought them together.But while Motzen has helped put together pieces of the Cohn family history, he is still hunting for a piece of his own, which he started to research when he first learned about the Cohn family and began working to help them.Motzen’s grandmother, 91-year-old Martha (Miriam) Koth Motzen, is a Holocaust survivor who does not have a single picture of her father, who was killed in the Holocaust.“My grandmother is alive and well, and she would love a photograph of her father, Yaakov Yehezkel Koth,” Motzen told the Post. “It would be really meaningful for my family if someone was able to find one,” he said. Motzen added that he thinks their best chance would be to find a class photo from a fellow student of his grandfather, who studied at the Pressburg Yeshiva in Bratislava between 1915 and 1919.Another possibility he mentioned was to locate an acquaintance from Putnok, Hungary, where his grandfather was born in 1897 and where he later returned to live with his wife, Regina Weingarten.“I would be thrilled,” Motzen said.