Ramah is "the camping arm of Conservative Judaism in the United States, which sees more than 11,500 campers every year." 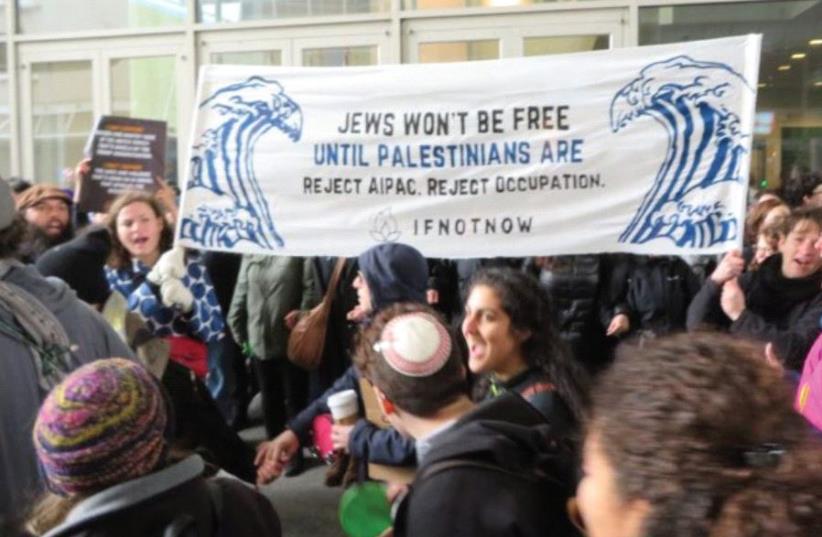 IFNOTNOW PROTESTERS outside the 2017 AIPAC policy conference in Washington, DC
(photo credit: RON KAMPEAS)
Advertisement
Far-left organization IfNotNow, together with Ramah alumni, have started a petition calling on Ramah summer camp directors to allow Combatants for Peace (CFP) to address campers this summer.Ramah is "the camping arm of Conservative Judaism in the United States, which sees more than 11,500 campers every year," according to its website.Some 300 young Israeli adults also "join the Ramah camp communities annually, and help to inculcate in the campers a love of Hebrew language together with a familiarity with and connection to Israel," the website explains.In a statement on its website, IfNotNow described CFP as a group of "Israeli and Palestinian former combatants who have laid down their weapons and are committed to the belief that the cycle of violence can only be broken when Israelis and Palestinians join forces."


"Campers deserve to have an honest education about the Occupation," IfNotNow tweeted. "Yet when we offered Camp Ramah the chance to bring @cfpeace to their camp, they said no." IfNotNow explained that this year, "in order to bring about real change at camp, we're trying something new. We are organizing a speaker tour with Combatants for Peace (CFP).""Weeks ago, Ramah alumni began fundraising for this CFP tour," the organization continued. "We reached out to each Ramah Camp Director to allow the program, so that campers and counselors could get a first-hand education on one of the most important parts of modern Israel: the Occupation of Palestinian communities in the West Bank, East Jerusalem and Gaza."IfNotNow added, that so far, "each and every Ramah Camp director has refused to host Combatants for Peace."The group explained that every summer, Ramah allows various speakers at camp from across the Jewish community, "but are now refusing to allow Palestinians or anti-occupation speakers to their camp." "This silencing of these voices harms both campers and counselors, who end up not properly educated on the daily nightmare of occupation," it emphasized, adding that "this lack of education is one of the core ways that the American Jewish community continues to support and uphold Israel’s occupation."