Jared Kushner and Ivanka Trump reportedly spent the first days of the holiday at a Passover event in British Columbia, Canada. 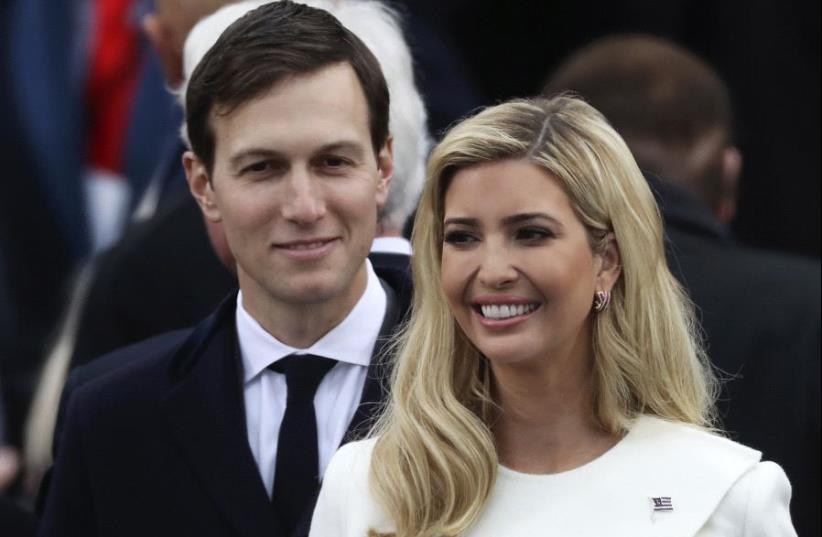 Ivanka Trump and husband Jared Kushner arrive at inauguration ceremonies swearing in Donald Trump as the 45th president of the United States.
(photo credit: REUTERS)
Advertisement
US President Donald Trump and the Jewish members of his family did not attend a Passover seder held at the White House.The seder, held Monday on the first night of Passover in the Indian Treaty Room of the Eisenhower Executive Office Building, continued a custom begun by President Obama.Trump's son-in-law Jared Kushner and daughter Ivanka Trump reportedly spent the first days of the holiday at a Passover event in British Columbia, Canada, Jewish Insider reported.

During #Passover, we reflect on the significance of the exodus from Egypt and celebrate the great freedoms we enjoy today! #ChagPesach pic.twitter.com/x2sOSXdWm1

Ivanka Trump tells CBS news about disagreeing with her father US president Donald Trump, Apr/5/17 (REUTERS)
In a post shared through social media Monday evening, Ivanka Trump wrote on Twitter: "During #Passover, we reflect on the significance of the exodus from Egypt and celebrate the great freedoms we enjoy today! #ChagPesach."The tweet was accompanied by a picture of herself, her husband, Jared Kushner, and three children in front of a White House display shelf. The Washington Post reported that this year's White House Seder was held in the Indian Treaty Room, catered kosher and without the president present.This follows the tradition of the model first set by Steve Rabinowitz, who served as former president Bill Clinton's director of design and production. He also organized a dinner in the treaty room, catered kosher.Since US President Donald Trump took office in November, Jared and Ivanka have both assumed White House roles. The Jewish world has watched as the first daughter and her husband received a special rabbinical pass to travel on Shabbat for the inauguration, held a Shabbat dinner at their home in the swanky Kalorama neighborhood of Washington DC, and even made hamentashen with their children to celebrate Purim.On Monday evening, Trump tweeted Passover greetings from both his personal and presidential accounts.“Happy Passover to all those celebrating! Chag sameach!” read a tweet from the @POTUS Twitter account on Monday night.Twelve minutes later, Trump issued another Passover tweet from his personal account.“Happy Passover to everyone celebrating in the United States of America, Israel, and around the world. #ChagSameach,” the tweet read.

Happy Passover to everyone celebrating in the United States of America, Israel, and around the world. #ChagSameach