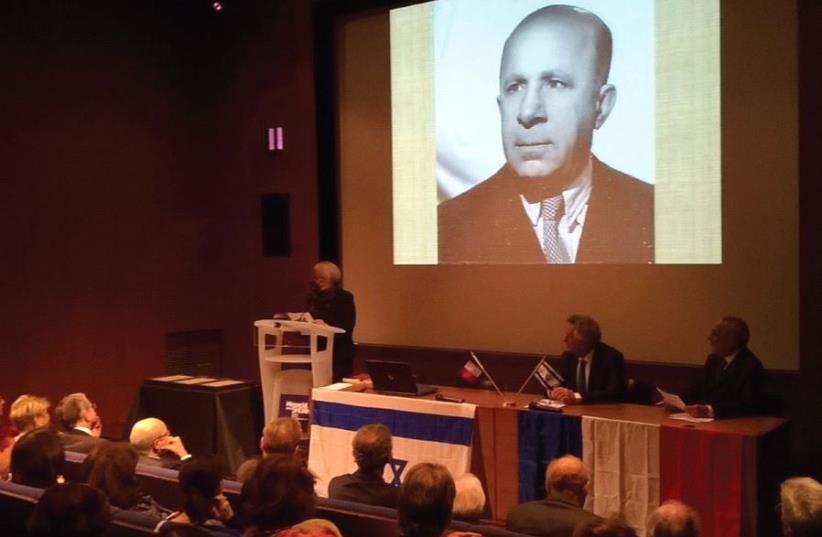 DR. TSILLA HERSHCO, a French-Jewish resistance expert, speaks at the B’nai B’rith ceremony yesterday in Paris.
(photo credit: RINA BASSIST)
Advertisement
PARIS – France’s Chief Rabbi Haim Korsia, French-Jewish resistance expert Dr. Tsilla Hershco and other leaders of the French-Jewish community gathered on Monday at the Paris “Memorial de la Shoah” museum for an exceptional ceremony, honoring nine Jewish men and women for saving Jews during the Holocaust.Marcel Marceau, Theo Klein, Léon and Joseph Eligoulachvilli, George and Fanny Loinger, Nelly Willer, Rachel Grunstein and Liliane Lieber-Klein were awarded the Jewish Rescuers award (JRJ) for saving Jews during World War II.Some 20 years ago, activists, survivors and researchers founded the Committee on Jews Rescued Jews (CJRJ), with the purpose of documenting, publicizing, and spreading the word about the deeds of Jewish heroes during the Holocaust.The founders felt that too little was known among the public in Israel and elsewhere about Jewish bravery, and that these heroes received little recognition.In 2011, the Committee, together with the B’nai B’rith organization, established the JRJ commemorating the heroism of Jews who saved Jews during the war while putting their own lives in peril. Since then, 162 men and women have been honored. Since creating the award, the founders have shed light on a little- known chapter of Jewish history, revealing heroic acts by Jews in France, Hungary, Greece, Germany, Slovakia, Russia, Poland and the Netherlands.For the people of B’nai B’rith, Jews were not only victims of the Nazis; brave Jewish men and women across Europe also took action in order to save those persecuted by the Germans.Most of the JRJ ceremonies take place in Israel. But this year, B’nai B’rith chose Paris as the venue for the award ceremony, dedicating it to Jewish heroism in France during the war. Serge Dahan, president of B’nai B’rith France said at the ceremony that the very origins of his organization can be found in the necessity of fighting antisemitism.“Many French people, humble, non-Jews helped Jews across our country and protected them from deportation.We are forever grateful to them. And aside from them, there was resistance from Jews; exceptional men and women who risked their lives to save others,” said Dahan, adding that “the nine men and women who are honored today played a particularly special role in saving Jews during the war.”Hershco, who represented the CJRJ, emphasized that many of these Jews were not recognized for their heroic acts.“Most of them saved other Jews within the framework of different Jewish resistance groups,” she said. “During this somber period, the Jewish resistance searched hiding places for children and families, produced fake documents, organized the passage of Jews out of France and conducted guerrilla warfare in the big French cities and in the mountains in the South. Thousands of Jews were saved through these activities throughout the years of the war.”Theo Klein, 97, was among the nine awarded this year (represented by a family member).Decorated by the French government, Klein has been a wellknown figure within French Jewish leadership; in the ’80s he served as president of the CRIF (French Jewry umbrella organization). During the war he was one of the resistance leaders, taking part in the rescue of hundreds of young Jews, mostly in the south of France.Another legendary name among French Jewry is the (late) Marcel Manger, also called Marcel Marceau, son of a Polish family in the Alsace-Lorraine region, who joined the French resistance in Limoges in 1942 together with his older brother Alain. Together, they smuggled Jewish children through the Alps out of occupied France into free Switzerland and to the south of Spain.Marcel also counterfeited identity documents, enabling Jews and other people persecuted by the Nazi regime to escape deportation.There were several women within these Jewish resistance groups. Nelly Willer and Rachel Grunstein, for instance, joined a resistance group in Nice. They were sisters and participated in operations to eliminate those who collaborated with the Nazis, thus saving the lives of many Jews in the region.After the war, the sisters joined efforts to save Jewish survivors, bring them to Israel and establish the Jewish state. For them, the war was not over until the survivors arrived in Israel.