The Jews of Venice think the history of their people in general and in Italy in particular is relevant today. 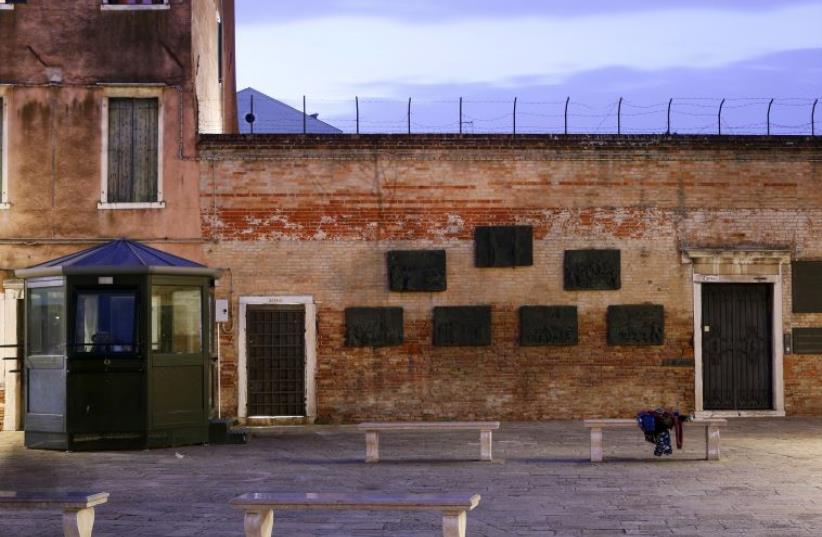 A police security kiosk stands to the left of a memorial to the victims of the Holocaust in the “campo,” or square, at the centre of the world’s first ghetto, in Venice northern Italy, March 22, 2016
(photo credit: REUTERS)
Advertisement
VENICE - The Jews of the world's first ghetto, which marks its 500th anniversary this month, have two words of advice for Europe as it struggles to deal with mass migration: patience and integration.More than a million people, mostly Muslims, streamed into Europe last year from the Middle East and Africa. Neither they nor their new hosts might immediately think the centuries-old experiences of another religious minority could help them now.But the Jews of Venice think the history of their people in general and in Italy in particular is relevant today. "We Jews, unfortunately, know a lot about exoduses," said Edoardo Gesua Sive Salvadori, 64, researching his ancestors in the library of the city's famous ghetto.University professor Shaul Bassi said Venice's rulers originally established the ghetto because they believed his people could not be integrated and had to be kept apart."Today, Italian Jews are proof that a minority can keep its identity and still integrate in a process of reciprocal influence," said Bassi, who is Jewish.Today's Italian Jewish community of about 25,000 is among the world's most integrated. But the memory of what can happen - such as the Nazi occupation, when Venice saw some 250 of its Jews deported to death camps and only 8 returned - is ever present.It was on March 29, 1516 that the leader of the Venetian Republic, Doge Leonardo Loredan, and his senate decreed that if Jews wanted to stay in Venice, they had to live on a small island surrounded by canals.The area was called "geto," from the verb "gettare" (to cast) because it was the site of an old foundry. Globally, this became "ghetto," with its infamous connotations through the centuries.In its heyday in the middle of the 17th century, nearly 5,000 Jews lived there. To accommodate births and new arrivals, they could only build upwards, resulting in some of the world's first "skyscrapers," which at seven or eight stories are still some of the tallest buildings in old Venice.Today, only about 20 Jews live full-time in the ghetto. The rest of the 500-strong Venetian Jewish community live elsewhere in the lagoon or on the nearby mainland, following other Venetians away from the city's pricey and crowded center.SHADOWS OF THE PASTFor nearly three centuries until Napoleon's defeat of the Venetian Republic in 1797, Jews were locked in the ghetto at night. Christian guards on boats patrolled the narrow canals and short bridges to enforce the rules. The Jews were even forced to pay the salaries of their Christian wardens.Holes that once held the iron hinges of the massive ghetto gates are still visible on stone posts, as are shadowy outlines on doorways where mezuzahs - small cases containing Hebrew verses from the Torah - were once affixed.Rabbi Scialom Bahbout, 72, the community's spiritual leader, discussed Europe's migrant crisis with a visitor in the small "campo," or square, that is at the center of a maze of alleyways, some narrower than outstretched arms."For better or worse, Jews have already gone down this (migrant) road," the white-bearded rabbi said, adding that it was important for Muslim migrants to understand that state law trumps religious law."If someone comes to a place, they have to accept the rules of the place, and the Jews showed this can be done by learning the language and integrating," he said.The ghetto has five small 16th-century synagogues, but only two are used regularly by the community. All five can be visited. Sumptuous inside, their outside markings are discreet.The Catholic Church forbade usury, so Jews thrived as moneylenders - the trade of Shylock in Shakespeare's "The Merchant of Venice" - and ran pawn shops, both activities for a mostly Christian clientele.Anniversary events include a production of Shakespeare's play in the ghetto and a major exhibition called "Venice, the Jews, and Europe," at the doge's palace - the same place where the decree that started the ghetto was signed 500 years ago.