Le Pen: If elected, French Jews will have to renounce Israeli citizenship 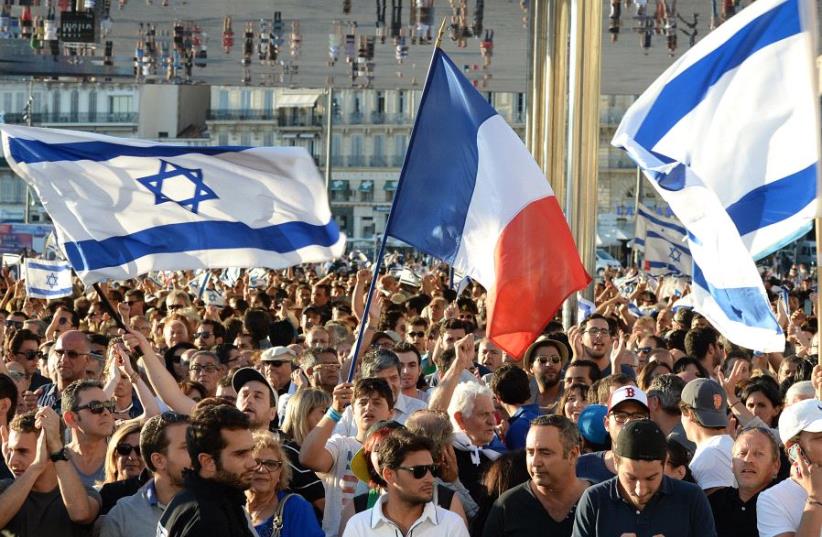 People hold Israeli and French flags as they take part in a demonstration supporting Israel on July 27, 2014 in Marseille, southeastern France
(photo credit: BORIS HORVAT / AFP)
Advertisement
French presidential candidate Marine Le Pen of the far-right National Front party said that if she is elected, people holding dual French and Israeli citizenship would have to give up one of their nationalities.The remark was made during an interview with France 2 TV on Thursday in which the candidate said she would not allow French citizens to hold dual citizenship in non-European countries.“I am opposed to a policy allowing dual citizenship in [non-European] countries,” she said.
France is no longer safe, National Front leader Marine Le Pen says
During the two-hour-long interview, host Léa Salamé questioned whether Le Pen would effectively ask Jewish French citizens “if they were willing to renounce their dual Israeli citizenship.” Le Pen responded in the affirmative.“Israel is not a European Union country,” she said.Le Pen said such a policy would not be about Jews, but rather about French Israelis “whom I ask to choose their nationality.”She added later that people who choose to give up their French citizenship would not necessarily have to leave the country.“France is perfectly capable of allowing foreigners on its soil, even for a long time, as long as they respect French laws and values.”“We rarely have issues with Israel on this subject,” she said.Her political party was founded by her father, Jean-Marie Le Pen, who routinely minimized the Holocaust.The younger Le Pen has sought to move the party past her father’s controversies, but French Jewish leaders still consider the National Front antisemitic.Le Pen is a leading contender in the upcoming French presidential contest, with a recent poll showing her advancing to the second round of balloting in May but still losing handily to front-runner Emmanuel Macron.A poll released Friday showed Le Pen getting 26% of votes in the first round, Macron 20.5%, conservative candidate François Fillon 17.5% and Socialist Benoit Hamon 15%.Fillon has been hit by a series of scandals, and many are calling for him to drop out of the race though he has vowed to remain.A separate poll released Friday showed that Fillon would beat Le Pen 60% to 40% in a runoff vote if Fillon made it through to the second round.The French electoral system puts the top two candidates from the first round into a runoff against each other.Polls show either Macron or Fillon winning a runoff against Le Pen comfortably.Reuters contributed to this report.