In a new lecture series launched this month, MJE focuses on the similarities, differences, and way members of the three faiths can better understand each other. 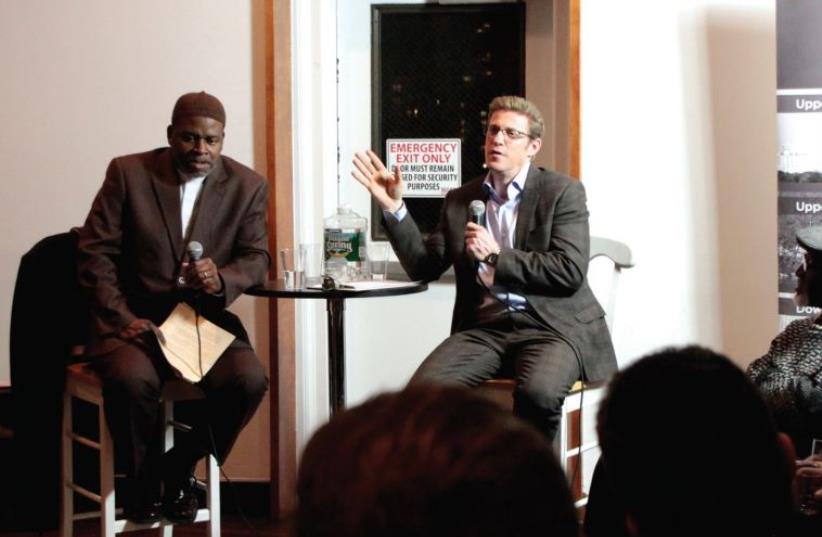 RABBI MARK WILDES and Imam Benjamin Bilal (left) give a joint lecture at an interfaith Manhattan Jewish Experience gathering in New York
(photo credit: Courtesy)
Advertisement
NEW YORK – When a rabbi, an imam and a pastor walk into a bar... no, it’s not the start of a joke, but the Manhattan Jewish Experience taking a light approach to bridging cultural and social gaps among young Jewish professionals, Christians and Muslims in New York City.In a new lecture series launched this month, MJE focuses on the similarities, differences, and way members of the three faiths can better understand each other.The idea for the program, which consists of three gatherings over as many weeks, stemmed from a weekly class taught by Rabbi Mark Wildes, the founder of the organization, and titled “Conversation Remix.”Each week, a different subject is discussed from two perspectives : the Torah’s as presented by Rabbi Wildes, and the academic or scientific view, as presented by experts.“I always try to relate the topic to something contemporary and what contemporary philosophers, academics or psychologists believe about whatever topic I’m discussing from a Jewish ancient perspective,” Wildes said.“For example we had a class about love, dating and relationships and I brought in a matchmaker from one of the websites. I also taught a class on sexuality from a Jewish perspective and I brought in a professional sex therapist and we sort of compared notes.”The approach, the rabbi believes, makes Judaism more relevant to the lives of less affiliated or unaffiliated young Jews.“I want people to be impressed with Judaism and it doesn’t take that much. We’re just not sufficiently proud of our faith,” he told The Jerusalem Post.The interfaith series began with a Jewish representative who discussed global anti-Semitism. Last week Imam Benjamin Bilal gave a presentation.The series ends on Monday, which is Martin Luther King Day in the United States, with a talk by Reverend Gregory Jackson of the Mount Olive Baptist Church in Hackensack, New Jersey, who was active in the civil rights movement.“The world has a very negative perception of religion today. People have turned away from religion because it seems to be at the heart of so much divisiveness and violence,” Wildes told the Post.“So when people see ministers, rabbis, imams getting together and doing a little ‘Kumbaya,’ they love it and it helps repair some of the negativity that’s out there in the world.”Bilal, who spoke last week at MJE, grew up as a Black Israelite and was raised as a Jew in Harlem before converting to Islam. He is has also been involved in the fight against Islamic extremism on the rise in Europe.Wildes said that exposing young Jews to the Muslim faith is critical.“It’s so important to do this now because as much as a significant minority of the Muslim world is radicalized, anti-Semitic and anti-Israel, the majority of Muslims are not,” he said.“And if the majority of Muslims are not, then we need to understand the difference in philosophy between those who are radicalized and the beliefs of those that are not.”The Imam said his experience in the lecture series was “nothing less than wonderful” and “further reinforced the notion that human beings, generally speaking, have much more in common than not in common.”“I hope that I was able to register the importance of our interfaith relationship as it is outlined for Muslims in the Koran itself, which mentions the term – “Ahlil-Kitab” normally translated as “People of the Book” [a reference to Jews and Christians, i.e. Children of Abraham],” he said.“However, ‘ahl’ means ‘family’ and [the phrase] should more correctly be translated as ‘Family of the Book,’” he added. “Families do not resolve issues with Uzis and machetes. Sometimes we have to agree to disagree without becoming disagreeable.”Wildes agreed that “once you start demonstrating to people that there are a lot of similarities between them, you can have a better perception of the world.”Atara Neuer, the West Side director of the Manhattan Jewish Experience, said the lecture series “marks the start of a dialogue.”“I really do envisage a world where imams are speaking in synagogues and rabbis are speaking at mosque,” she told the Post. “If you’ve never met somebody who’s different from you, you only can rely on what you’ve heard and what you see in the papers."“It’s so important just to get to know each other,” Neuer said.