The game, scenes of which were posted on Youtube, shows its white supremacist main character attacking a refugee crisis center, among other disturbing scenes. 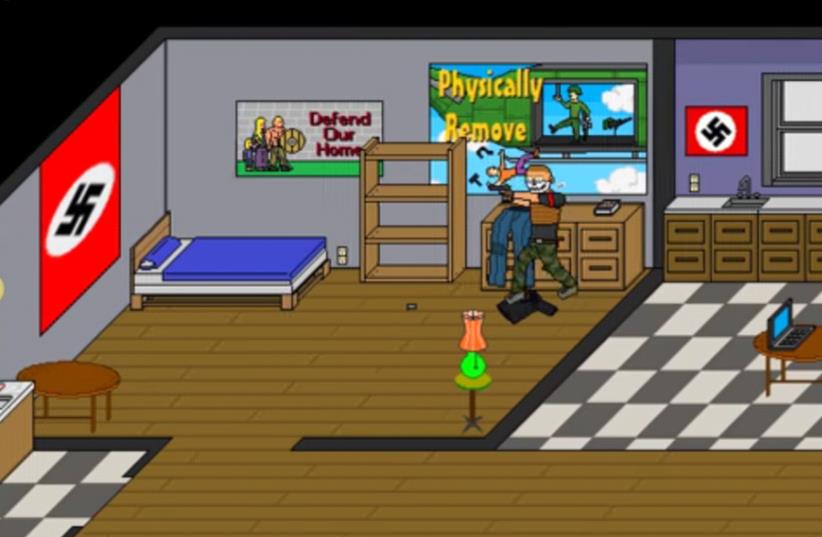 British-based Jewish charity the Community Security Trust described the game, called "Angry Goy," as "deeply offensive" after footage showed Jews being shot or placed into ovens.“This is obviously deeply offensive and a deliberate provocation by violent American neo-Nazis," Mark Gardener, director of communications for the Community Security Trust, told the Jewish Chronicle.The game begins as white-supremacist character “Natt Danelaw” decides to go on a murder spree after watching news reports of "six million" immigrants making their way into Europe.
“The gates of Europe have been destroyed by the parasitic (((Leftists)))”, the computer game begins. Neo-Nazis on social media often use three brackets to signify Jewish control, or if someone is Jewish. “Brown murderers and rapists come freely into these once great nations," the game continues, adding “There is only one solution… a Final Solution.”The game later shows the racist main character force a Jewish professor into an oven, and later shoot and kill a Jewish bank manager, according to The Chronicle. The game also contains racist and homophobic imagery, with one scene showing “Natt Danelaw” attacking a refugee crisis center. The game ends with audio from Adolf Hitler railing against Jews, as an anti-Jewish conspiracy movie plays in the background. Creators of the video game, credited to “Wheel Maker Studios," described "Angry Goy" as an "ironic s***post,” in a pre-game message. They later add they are "not responsible for any harm or injury that could possibly occur from the use of this game.”
Advertisement
Subscribe for our daily newsletter