Poll: Most Frenchmen believe Jews responsible for rise in anti-Semitism

According to French media reports the 18-month study 56% of Frenchmen believe that Jews have a “lot of power” and are richer than average. 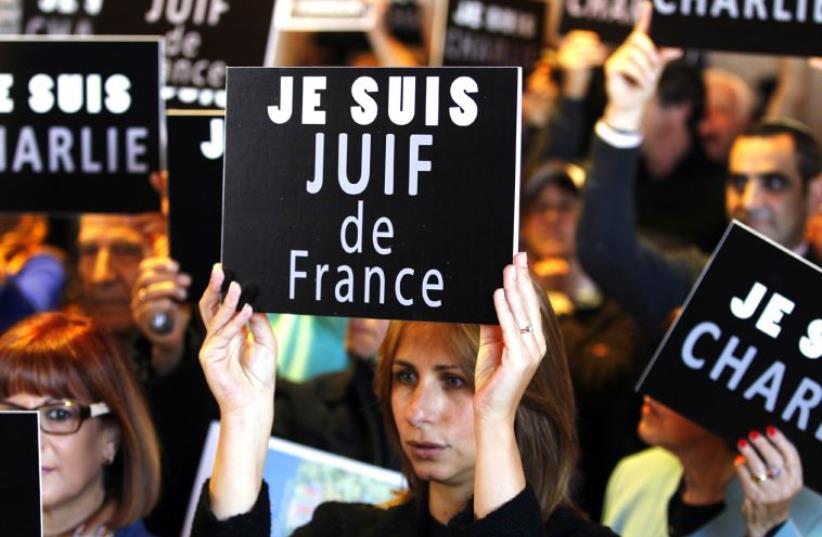 People hold up signs at a rally in Jerusalem, January 11, following terror attacks in France
(photo credit: REUTERS)
Advertisement
Fully 60 percent of Frenchmen believe that Jews bear at least some responsibility for recent rises in anti-Semitism, according to a new poll by the Ipsos market research firm.According to French media reports, the 18-month study, which was sponsored by the Fondation du judaïsme français, also found that 56% of Frenchmen believe that Jews have a “lot of power” and are richer than average while more than 40% said that Jews are “a little too present in the media.”About 13% agreed that “there are a few too many Jews in France,” perhaps helping to explain why “three-quarters consider it difficult to be a Jew in France” and 40% are considering emigration.These findings confirm another recent poll by the Institut français d’opinion publique, which pegged the number of French Jews mulling moving to Israel at 43% percent. Given France’s approximately 700,000 Jews, that translates to about 200,000 people.Anti-Semitism and a worsening economy have driven many French Jews to seek their fortunes abroad, with significant communities forming in Montreal, London and other cities.Speaking with The Jerusalem Post last year, Jewish Agency chairman Natan Sharansky stated that around 50,000 French Jews asked for information about immigrating to Israel in 2014.More than 7,900 French Jews made aliya in 2015, up 10% from the previous year, when the western European nation became the leading source of immigrants here with 7,000 olim, more than twice the number from 2013.This week’s Ipsos poll also found that French mistrust of Islamic immigrants was high, with more than half of respondents stating that they did not believe that immigration enriched their country and nearly a third stating that “racist reactions may be justified.”While 26% of respondents stated that Muslims were problematic, however, only 4% said the same regarding Jews.According to a study conducted by the Anti-Defamation League in 2014, 37% of people in France believe in enough anti-Semitic stereotypes to be counted as biased.In an email to the Jerusalem Post on Monday, French expert Dr. Dov Maimon of the Jewish People Policy Institute commented that the results of the Ipsos poll were “unfortunately not real news.”“40% of Jews have investigated quitting.Antisemitism is very high, etc. Jews are perceived as too many in the media, in the politics, in finance, in public affairs, etc. What is new? Jews are not perceived as troublemakers, they are contributing to the country. Prejudices against Muslims are much higher.”