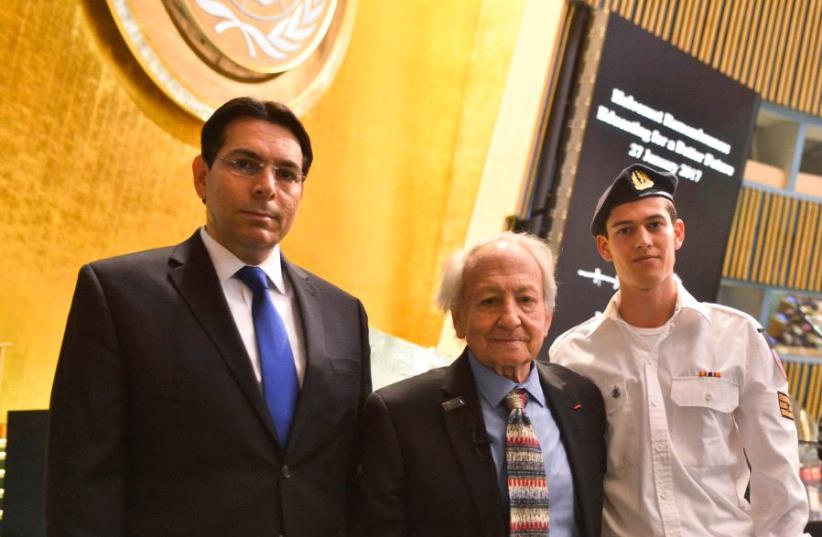 Noah Klieger in the UN General Assembly Hall with his grandson Yuval and Ambassador Danon
(photo credit: HAREL RINTZLER)
Advertisement
At a ceremony marking the 72nd anniversary of the liberation of Auschwitz on Friday, UN Secretary-General Antonio Guterres said he is “extremely concerned” by expressions of hatred in the world today, including the targeting of immigrants and refugees.The annual ceremony was held in the General Assembly Hall and attended by UN diplomats, Holocaust survivors, Jewish groups and young students among others.The event also included speeches by the General Assembly President Peter Thomson of Fiji; Israel’s Ambassador to the UN Danny Danon; and the Deputy Permanent Representative of the United States to the UN Michele Sison.The keynote speech was delivered by Israeli journalist Noah Klieger, 91, who was a member of the Jewish underground movement in France before he was captured and sent to Auschwitz in 1942. He has dedicated his life to educating the young about the Holocaust.Guterres told the hundreds of people in the audience: “After the Holocaust, the world seemed eager to find a more cooperative path. The founding of the United Nations was one expression of that moment. Humankind dared to believe that tribal identities would diminish in importance. We were wrong.“Today we see antisemitism, along with racism, xenophobia, anti-Muslim hatred and other forms of intolerance, triggered by populism and by political figures who exploit fear to win votes,” he said. “Irrationality and intolerance are back.“I find the stereotyping of Muslims deeply troubling,” he continued. “A ‘new normal’ of public discourse is taking hold, in which prejudice is given a free pass and the door is opened to even more extreme hatred.”Guterres condemned Holocaust denial as “in complete contrast to tolerance, the primacy of reason and universal values,” along with expressions of antisemitism on social media and elsewhere.“We need to be vigilant. We need to invest in education and youth,” he said. “We need to strengthen social cohesion so that people feel that diversity is a plus, not a threat. The United Nations itself must do more to strengthen its human rights machinery, and to push for justice for the perpetrators of grave crimes.“After the horrors of the 20th century, there should be no room for intolerance in the 21st,” Guterres said, reiterating his commitment made last week at the Park East Synagogue that he will be on the front line of the battle against antisemitism.During the ceremony, the General Assembly paid tribute to Auschwitz and Buchenwald survivor Elie Wiesel, who died last July. His widow, Marion, was in attendance.To give his testimony, Klieger was accompanied to the podium by his grandson Yuval and Danon. Yuval wore his Israel Navy uniform.Klieger begun his speech in Hebrew before switching to English. He recalled three dreams that he had in Auschwitz: to be free, to tell as many people as possible what the Nazis did to the Jews, and to help to regain the land from which the Jews were driven into exile and establish an independent country.“I can say proudly today I reached all my goals,” Klieger said. He called on the world to continue to tell the story of survivors and on the UN to adopt a resolution encouraging member states to educate the next generations about the horrors of the Holocaust.“We remember our history as painful as it may be, so that we learn from it and never let it repeat itself,” Danon said in his speech. “And we remember the bravery of the survivors. Those brave souls who are slipping away from us as they implore the next generation to heed the lessons of this darkest of periods with two simple words: Never again.”