UK Jewish leader: Kingmaker DUP is friend of the community and Israel

How will British Jews be affected by the alliance on the horizon? 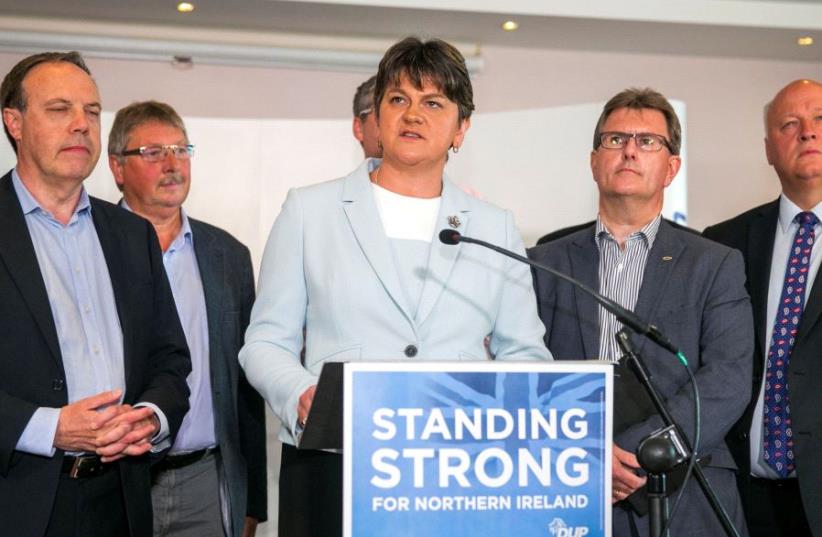 Leader of the Democratic Unionist Party (DUP) Arlene Foster addresses journalists in Belfast.
(photo credit: REUTERS)
Advertisement
An agreement between the UK’s Conservative Party and the Democratic Unionist Party would be “positive news” for the country’s Jewish community and for Israel, President of the Board of Deputies of British Jews Jonathan Arkush told The Jerusalem Post on Friday.The DUP, the largest party representing Northern Irish unionists, agreed to support Prime Minister Theresa May’s minority government on an informal basis in parliament, according to reports Saturday night, following Thursday’s national election in which May fell short of a parliamentary majority.Arkush and his colleagues recently met in Belfast with DUP leader Arlene Foster and the party’s Westminster leader Nigel Dodds, whom he described as having been “exceptionally warm and friendly.”DUP has strong links to Protestant churches and is staunchly pro-Israel. It has also publicly stated its support for the Board of Deputies’ “Ten Commitments” – a part of its Jewish Manifesto that includes requests to parliamentarians regarding policy on issues that affect British Jewry.The DUP defends Northern Ireland remaining part of the United Kingdom and takes a conservative approach to social issues. The party’s 10 seats would give May a fragile but workable partnership.While Arkush said that an arrangement between the two parties would promote the UK’s strong friendship with Israel, he also noted that “May is clearly a strong friend of Israel and her authority and her government’s ability to govern has been weakened, so that is not something our community can take lightly.”Jewish support for the Labour Party has dropped under the leadership of Jeremy Corbyn, with issues of antisemitism and his stance on Israel pushing some toward the Right.“Corbyn is not a Labour Party leader who is trusted by the Jewish community,” Arkush said, pointing to reports that while the leftist party enjoys strong support in London, that trend is lower in Jewish areas of the capital.“Jews did not feel able to support Labour,” he said. He noted, for instance, that even Jewish Labour Movement leader Jeremy Newmark lost to Tory MP Mike Freer in Finchley and Golders Green – the constituency with the highest percentage of Jewish voters in the country. Freer’s majority was, however, significantly cut.Official statements put out by the Board on Friday were cautious, indicating that the community leaders would work well with any government.“The community has woken up with the rest of Britain to the prospect of uncertainty and political instability,” Arkush said.“Corbyn’s standing has improved as a result of the election,” he continued, adding that he did not forecast any change in the “strained relationship between the Labour Party and the Jewish community.“There is no reason to think that there will be any change is his [Corbyn] reluctance to deal with antisemitism in his party and I feel that the smell of antisemitism is still persisting in too many corners of the party,” Arkush said, commending the suspension of Labour Party member Phillip Jones over abusive messages he sent to “Zionist” BBC interviewer Emma Barnett.Addressing chatter that there would a rise in British immigration to Israel should Corbyn become prime minister, Arkush described such speculation as “overblown.”“I don’t think any daily concerns of the community would be affected if there was a Prime Minister Corbyn,” Arkush reflected, predicting “business as usual,” whatever the outcome of this turbulent election.Reuters contributed to this report.