The comments came shortly after Ambassador to the US Ron Dermer said that the Israeli government had evidence Washington was behind the UN move earlier in the day. 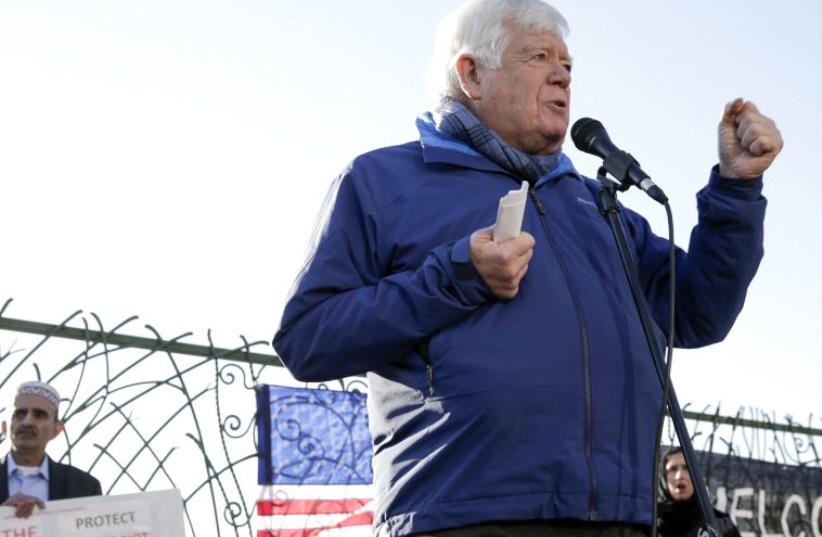 Democratic US Rep. Jim McDermott speaks at a pro-refugee protest organized by Americans for Refugees and Immigrants in Seattle, Washington November 28, 2015
(photo credit: REUTERS)
Advertisement
A US congressman accused Jerusalem of conducting a "war on the American government" in response to the Obama administration's refusal to veto a UN Security Council resolution against Israeli settlements.During an interview with MSNBC Monday, retiring Washington Democratic Rep. Jim McDermott warned that Israel's response was just the beginning of a diplomatic war-of-words against Washington, adding that the development was "very disturbing to watch.""We're seeing the air war right now, we're seeing all these tweets, all this kind of innuendo and all these half stories, and all this stuff is to create tremendous tension," McDermott explained.The comments came shortly after Israeli Ambassador to the US Ron Dermer said that the government in Jerusalem had evidence that Washington was behind the UN move. “What is new is that the United States did not stand up and oppose that gang-up,” Dermer said. “And what is outrageous is that the United States was actually behind that gang-up. I think it was a really sad day and a shameful chapter in our relations.”US senior officials have vehemently denied the accusation.
Netanyahu: Israel to reassess UN ties after settlement vote
The United Nations Security Council on Friday passed the motion, known as resolution 2334, condemning Israel's settlement construction, after the United States abstained from casting a vote over the controversial decision. The US had previously been expected to yield its veto power, as a permanent member of the 15-state body, over the issue.McDermott later said that Israel was now "running their own war against us and our policies," due to outraged that the Obama administration would fail to protect them in the international forum. Prime Minister Benjamin Netanyahu has described the move as a "stab in the back.""They're angry about it, so they're using him [Obama] now as the butt for … in anticipation somebody will come in and do exactly what they want," the Democratic lawmaker added.