Congressmen urges US to move embassy to J'lem

Officials: Moving embassy from Tel Aviv to Jerusalem is "no brainer"; Jerusalem should be recognized as capital of Israel.

By Gil Stern Stern HOFFMAN
JUNE 5, 2013 16:47
US Embassy Tel Aviv 311
(photo credit: Wikimedia Commons)
The heads of the bipartisan Congressional Israel Allies Caucus urged the American administration on Tuesday to move the US Embassy in Israel to Jerusalem.The Congressmen spoke at an event marking this week's 46th anniversary of Jerusalem's liberation in which Knesset members and European parliament members participated by video conference.   “We strongly believe that Jerusalem should be recognized as the capital of Israel with no waivers and no caveats,” said Congressman Doug Lamborn (R-Colorado), who heads the Israel Allies Caucus in Congress.Congressman Brad Sherman of California said moving the embassy was long overdue. He said it was a “no brainer” because the location of the planned US Embassy in Jerusalem is in a part of the city which has been under Israeli sovereignty since 1948. 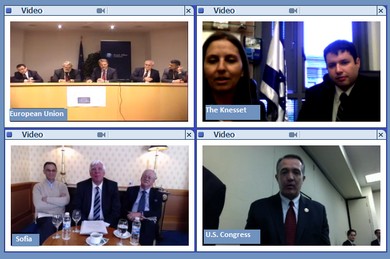 From top to bottom left to right - European Union, MK Robert Ilatov, Rabbi Benny Elon, MEP Hannu Takkula, MEP Miroslav Mikolasik, David Saranga  - Knesset - MK Gila Gamliel, Josh Reinstein - Sofia - MEP Magdi Cristiano,  MEP Bastiaan Belder, MEP Roger Helmer- Congress - Congressman Trent Franks“The deep commitment and friendship to the State of Israel transcend political differences,” said Congressman Trent Franks (R-AZ).Successive US administrations including Presidents Clinton Bush and Obama have repeatedly used a presidential waiver to delay moving the US Embassy from Tel Aviv to Jerusalem, in accordance with a 1995 law which authorized the embassy's relocation but which gave the President the power to postpone its implementation every six months in the interests of national security.The event, which was attended by dozens of lawmakers around the world, was broadcast simultaneously in parliaments in Europe and Jerusalem.“Jerusalem is not just a place but an idea where we can unify people of all faiths and all backgrounds,” said MK Dov Lipman, who flew in from Jerusalem for the event.  “We have made Jerusalem a place where everyone can worship openly.”
Subscribe for our daily newsletter