By Gil Stern Stern HOFFMAN
APRIL 8, 2013 05:42
Likud activist Moshe Feiglin at the Kotel 390
(photo credit: Marc Israel Sellem)
Advertisement
Israel must stop using the Holocaust to score political points and should no longer bring foreign leaders and dignitaries to the Yad Vashem Holocaust Memorial Museum, Deputy Knesset Speaker Moshe Feiglin (Likud) told The Jerusalem Post Sunday.In comments he originally make at a conference in Shoham Thursday, first revealed by Ma’ariv, Feiglin said that “Israel has wrongly used the Holocaust as a tool to justify our existence and sovereignty here.”“They have made it as if we have to have a Jewish state because of the Holocaust,” he told the Post. “When the diplomats are brought to Yad Vashem, they are speechless. But giving only security reasons for being here does not work with new generations in Europe who care about rights. The other side’s incorrect arguments about the land being theirs are more persuasive than the pragmatic arguments about what would happen if there were no Jewish state.” 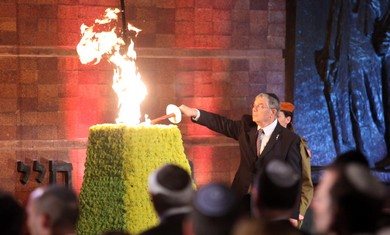 Feiglin insisted that “The reason for the state of Israel, for our existence, is not security, but our national goal. But the Holocaust teaches us that we should always be strong, not only physically but also morally.“Without understanding the deep justification for our existence here in the land of Israel, no army will help us. This is a very important point.”Feiglin also complained about the poor financial support Israeli governments have given Holocaust survivors over the past several decades.“The past lack of support for Holocaust survivors was due to resenting them and blaming them for not fighting like we did in Israel,” he said. “This is incorrect historically because in 1948 huge sums of our fighters were Holocaust survivors.”Feiglin attended the Holocaust Martyrs’ and Heroes Remembrance Day ceremony at Yad Vashem Sunday night. He brought along a neighbor who is a Holocaust survivor who fought in Israel's wars.Although Feiglin did not lose relatives in the Holocaust, he wrote on his Facebook page that he always took Holocaust Remembrance Day seriously and even used to fast on that day.“When we went to Yad Vashem on school trips and I saw a picture of a German soldier cutting a Jew’s beard, I decided that when I would grow up, I would take revenge for that Jew by growing a beard.” he wrote. “I kept that promise.”Feiglin, who refused to lease a German car from the Knesset, said Israel should reconsider how it has built its relations with Germany.As to tools for stemming the tide of anti-Semitism in the world, Feiglin said, “When Israel radiates self-assurance...Jews feel much more secure everywhere and the level of anti-Semitism goes down. On the other hand, when Israel fails to reflect our basic right to this land, as we did when we signed the Oslo agreement and shook the hands of the head of the PLO – the organization that is meant to liberate the land of Israel from the Jews... then the level of anti-Semitism rises,” Feiglin said.