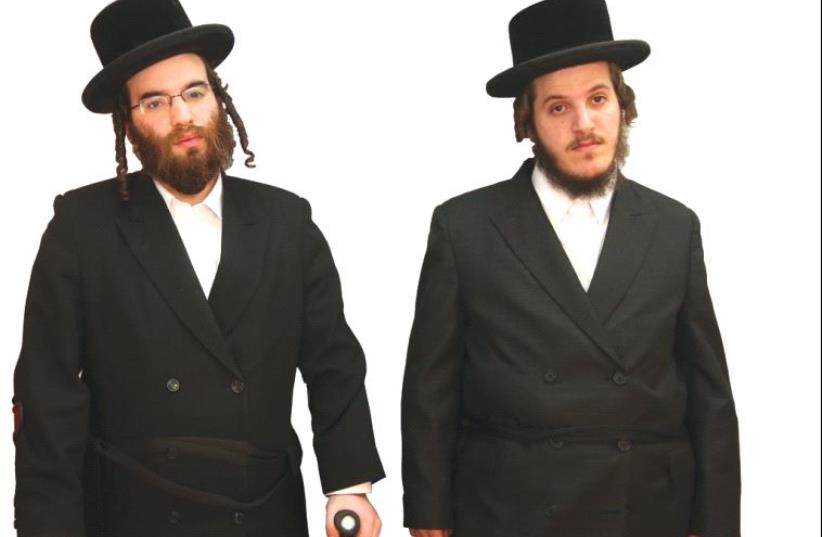 Chaim Winternitz and Menachem Farkash stand outside the OneFamily office in Jerusalem
(photo credit: MARC ISRAEL SELLEM)
Advertisement
On the morning of March 22, Chaim Winternitz, 28, and his brother-in-law, Menachem (Mendy) Farkash, 24, were at the Brussels Airport in Zaventem when they felt a huge explosion.Sitting in the OneFamily office in Jerusalem, Winternitz recounts what happened. “I said to him in Yiddish, ‘Mendy, was that a bomb?’ He said yes. So we started to run away. I ran pushing my cart of suitcases, but he left his cases behind.When a second bomb went off, I saw light, flew up into the air and then crashed to the ground.“I felt really hot and said ‘Shema Yisrael,’ because I thought that was the end. But my cases had protected me from even worse injuries. The cases were burned completely, while 15 fragments hit my right leg.”A third bomb was found during a security search of the airport, and a fourth exploded at the Maalbek metro station. Altogether, 32 civilians (16 at Zaventem and 16 at Maalbek) and three ISIS terrorists were killed and 300 civilians wounded in the worst terrorist assault in Belgium’s history.Although Winternitz and Farkash suffered serious leg wounds, the Belz Hassidim say their stories are replete with miracles. Winternitz, who made aliya from Belgium a decade ago, has dual Israeli-American citizenship and is a religious teacher in Jerusalem. He is married to Farkash’s sister, Esther, and has five children.A week before the attack, a group of 15 people – including Chaim and Esther Winternitz, their eight-yearold daughter, Bluma, and Farkash – flew to Brussels for the wedding of the latter’s brother, Aharon.Farkash, who studies at a yeshiva in Ashdod, went without his wife, Rivky, who was pregnant with their second child. “They are part of my miracle,” Farkash says. “We were advised by our doctor that Rivky should not fly because it would be too risky. She later had a son, Yehuda Mordechai.”Although Farkash had taken out travel insurance, Winternitz had not.“Part of my miracle is that my wife decided at the last minute to call and take out insurance for the whole family. It saved us hundreds of thousands of euros,” says Winternitz. “Later, at the airport, my wife went to the counter to claim back VAT, and I don’t know why, but I told her to take Bluma with her.That was the next miracle, because they were not hit by the bomb.“My wife and daughter were separated, and my wife’s sister took Bluma, who calmed all the adults down after the bombings by telling them an inspiring story. I don’t know where she got the strength from, without knowing where her mother and father were. This was a true miracle.”A stranger helped Farkash take out the shrapnel from his aching legs, and then left. Then a rescue team arrived, put him on a stretcher and took him to the hangar, where most of the wounded were initially treated.“Everyone had run away, including the police,” Winternitz says. “They were scared there would be another bomb. But a man named David Duculot came out of nowhere, and risked his life by forcing me to walk out of the building and placed me on a bench, where I shouted down an ambulance. That was the next miracle.”Both Farkash and Winternitz were flown back to Israel together before Passover, and have since undergone a series of operations and a long process of rehabilitation. Surgeons at Hadassah University Medical Center removed a bomb splinter just a centimeter from Farkash’s heart, and four-centimeter pieces from Winternitz’s back and head. Winternitz also lost his hearing in his left ear.Eight months later, both men can now walk, although Winternitz needs crutches and Farkash limps.OneFamily, a non-profit organization that helps Israeli terrorist victims and their families, has accompanied them on every difficult step on their road to recovery. “OneFamily’s representatives have visited us regularly and helped us financially. They really understood our pain,” says Farkash.“The name ‘OneFamily’ is most appropriate. They made us feel like we are all one family, with no conditions,” adds Winternitz.For now, the two men’s efforts are focused on getting the Defense Ministry to recognize them as victims of terrorism.“We have hired lawyers here and in Belgium,” Winternitz says. “A fourth terrorist arrested by police said they had targeted people on flights going to Russia, the US and Israel.”Asked if the experience has strengthened their faith, the two men nod. “A lot,” says Winternitz.“We both have to undergo more operations. Even though we’ve suffered, we’ve seen signs of divine intervention, so many good people, so many miracles.”