No solid trends across the media despite big news stories; Israeli ties with Turkey, mass protests struggle to make it into int'l headlines.

By elana kirsh
SEPTEMBER 12, 2011 13:54
Numbers Crunch 311
(photo credit: Mrkay Design)
It was messy online this past week, with no solid news trends across the media despite some big stories breaking and developing. In local media, Israeli ties with Turkey and the previous week’s massive protests were the prominent stories, though neither issue figured prominently in international headlines.Noise from the social justice rallies across Israel was heard loud and clear on Twitter, after over 400,000 people took to the streets in simultaneous demonstrations across Israel last Saturday night. In both Tel Aviv and Jerusalem, the movement’s hashtag #j14 was the most prominent tag visible on Trendsmap’s real-time graphic. 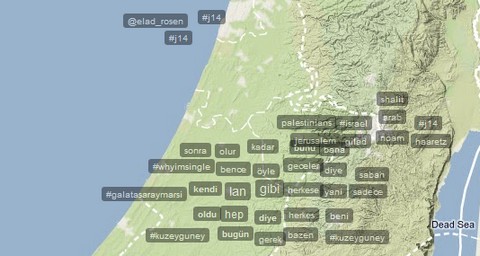 Trendsmap.comBy the week after the rallies, however, with tents being cleared off Rothschild Boulevard, Israelis had moved on. Likester ranked as the top-shared link on Facebook that of kika, the Austrian furniture retailer which opened in Netanya and had to turn away crowds.While the jury is still out on what exactly the government plans do to rectify the economic imbalances put on the agenda by the protesters, JPost readers were firm that the defense budget should not be cut. In a quick vote taken in recent weeks, some 60 percent of over 2,000 respondents voted that the money should be found elsewhere.

Click for more poll resultsOn JPost.com, however, it was the diplomatic turmoil which interested readers most. The most-viewed story of the week was about the EU voice on the planned Palestinian statehood bid in the UN this month, and three of the top five stories related to the deterioration of Israel’s ties with Turkey. The second slot was taken by the wrap-up of the nationwide rallies, including videos and photos.1. Sarkozy wants united EU voice on statehood bid
2. 400,000 rally for social justice across the country
3. Israel unfazed by Turkish sanctions, won’t apologize
4. Turks reduce Israel’s diplomatic presence, expel envoys
5. Palmer: Gaza blockade lawful, IDF used excessive forceOn the JPost talkback forums during the same period, stories on Turkey ties made a full sweep - all five of the most active threads were related to the release of the Palmer Report and subsequent reactions from Ankara.1. Turkey gives Israeli diplomats 2 days to leave country
2. Palmer: Gaza blockade lawful, IDF used excessive force
3. Israel unfazed by Turkish sanctions, won’t apologize
4. Turkey vows legal action against Israelis involved in raid
5. Turkey to raise Israel’s Gaza blockade to The Hague

JPost readers were split on how Israel should respond to the situation, though only 10% of respondents to a recent poll backed an apology to Turkey, as the leadership in Ankara has repeatedly demanded. The most popular response, with half of the vote, was to do nothing, as the Palmer Report largely supports Israel’s position.

Click for more JPost poll resultsIn the international sphere, meanwhile, the lady of the week on YouTube Breaking News was Irene, closely followed by fires in Texas and the earthquake which wobbled the US East Coast. Along with a playlist of videos from the fires, and dozens of clips of the tremor caught on video, YouTube’s trends blog posted a graph which showed spikes in searches for “earthquake” and “hurricane.” According to recorded data, these were the biggest spikes since the Japan tsunami earlier this year, and the Haiti quake in 2010.The Pew Research Center’s analysis of US news interest explained the prominence of the search spikes, as 20% of news coverage and 36% of news interest followed Hurricane Irene. The PRC News Interest Index found that women were more interested in the hurricane than men - 44% of women surveyed said they were following the story very closely, as opposed to 34% of men.The fact tank’s News Coverage Index ranked US President Barack Obama as the top newsmaker of the week, the dominant figure in 10% of stories analyzed. Deposed Libyan leader Muammar Gaddafi took the second spot at 3%, down four points from the previous week. In “blog buzz,” according to BlogPulse, Obama was also the most mentioned figure, followed by Texas governor and presidential hopeful Rick Perry, and Lady Gaga.BlogPulse’s list of most-cited news stories on blogs this past week showed a far more varied selection than any other medium. Top stories ranged from a New York Times piece on the struggling US Postal Service in the e-mail age to a BBC piece on an invisibility cloak, with no discernible trends aside from the prominence of stories from those two news sources. According to Neilsen’s automated trend discovery system, these are the top five news sources cited by bloggers in the past week:1. Google News
2. Guardian Unlimited
3. Yahoo! Sports
4. The New York Times
5. BBCFrom news sites to blogs, tweets to videos, The Numbers Crunch is a bi-weekly column which zooms out and brings you the big picture online, from Israel, the Middle East and around the world, and poll results from JPost.com. If you have stats to share, e-mail elana@jpost.comThe writer is the Internet desk manager at The Jerusalem Post
Subscribe for our daily newsletter