One of the city’s most ‘dysfunctional’ buildings is getting a new lease on life – as part of celestial, eco-friendly Jerusalem. 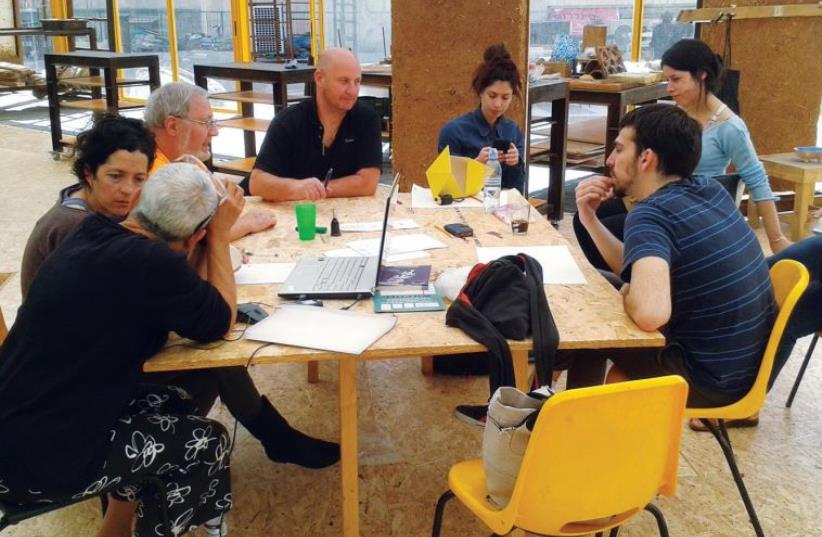 Members of the ‘balcony studio.’
(photo credit: Courtesy)
The Clal Center – the drab, brutalist concrete shopping center and office tower at 97 Jaffa Road that has been the venue of many suicides and is arguably the most dysfunctional building in Jerusalem – is undergoing a design makeover, thanks to the nonprofit Muslala.org.The story began last Succot when the nonprofit organization – established in 2009 by artists, residents and community activists in Musrara – erected a geodesic dome succa on the roof on the dystopian landmark (which now sports a safety net to discourage suicidal jumpers from diving off the 15-story tower). Muslala’s holiday initiative proved popular in bringing the public to the dreary and confusing building, commonly called Binyan Clal, which many Jerusalemites steadfastly avoid.This led the Clallir management and maintenance company – which operates the Clal Center – to lease to Muslala for a symbolic fee 280 square meters of unfinished space atop the six-level atrium and 2,000 sq.m. of the adjoining rooftop. With NIS 1 million in funding to date from the Jerusalem Foundation, the Jewish National Fund of Canada, the Eden Company for the development of central Jerusalem, and the Jerusalem Municipality, Muslala set up the “balcony studio” to renovate the abandoned dead zone into an imaginative and attractive, eco-friendly community center and green roof garden that will include a fountain, urban farm, beekeeping center, café, gallery and office for the nonprofit.
Read More...
Clallir hopes the renovation will finally end the building’s cursed karma, which according to an urban legend began when two local mafiosi murdered a fellow Jerusalem criminal in 1972 and buried him in the structure’s concrete foundations. Adding to that mythic malaise, in 2003, a suicide bomber blew up a No. 14 bus in front of the building, killing 16 and injuring more than 100. A decade later, a disgruntled client entered a Clal Center law office and shot dead a father and daughter legal pair in a business dispute.Architect Ze’ev Arad and a team of 40 who paid NIS 250 each to join Muslala’s design studio have been busy creating the innovative community center and roof garden. While work was recently finished laying lacquered chipboard as flooring and giving the raw space its initial form, a marathon of construction is set for March 16 and 17.Muslala activist Matan Israeli is optimistic that Mayor Nir Barkat will attend the official opening set for May 20.“It’s the work of M.C. Escher,” Israeli says of the awkward and challenging atrium with its maze of stairs and escalators created by architect Dan Eitan nearly half a century ago. “You just have to see the potential.”Eitan, a prolific and talented architect who won Israel’s prestigious Rechter Prize for Architecture, acknowledges his design for the Clal Center hasn’t proven to be user friendly. One reason was that the stores were sold rather than leased, creating an administrative and marketing nightmare. Symbolizing the commercial center’s failure, it today houses sketchy and sub-prime tenants including three of Jerusalem’s four sex shops, which have made the 24/7 Clal Center a furtive late-night hangout for horny haredim.Turning visionary and evoking dense multi-tier cities like Tokyo, Singapore and New York, Israeli envisions a rooftop forest planted in perlite, and a skybridge arching over Jaffa Road connecting to the Abraham Hostel’s rooftop lounge.Artist Gai Ha-Zvi, responsible for the octagonal, three-meter-diameter fountain that will feature aquatic plants, is equally lyrical.“Water is such a connecting force. We will experiment. It [the rooftop] is a platform for new urbanization. It’s a work in progress. We’re developing a path for research.”What of the welter of air conditioning, pipes and infrastructure currently located on the roof? “That’s part of the challenge,” responds ha-Zvi.“How do you interact and include the existing systems, and even improve on them? For example, building shade over air conditioning units.”Citing Judaism’s view of an earthly and celestial Jerusalem, ha-Zvi calls the roof perched between several skyscrapers an exceptional space.“It’s a 360-degree amphitheater. It’s an urban acupuncture point. It brings out the creativity in artists. It’s the beginning of something wonderful.”Architect Zeev Arad similarly appreciates the city center site’s unique urban locale.“It’s the place most similar to Manhattan in Jerusalem. This [new design] should resolve the problematic nature of the Clal Center – which everyone is familiar with,” he says optimistically.While Arad drafted the overall design for the new space, he emphasizes the holistic role of the balcony studio in creating the details.“We let go of the control.”The result? Like Paris’s revolutionary Centre Georges Pompidou, designed by Richard Rogers and Renzo Piano 39 years ago, the revamped Clal Center proudly displays its infrastructure of pipes and vents, and hopes to serve as a new paradigm for urbanism where the whole is greater than the parts.
Cancel Subscription