Speaking up for Syria 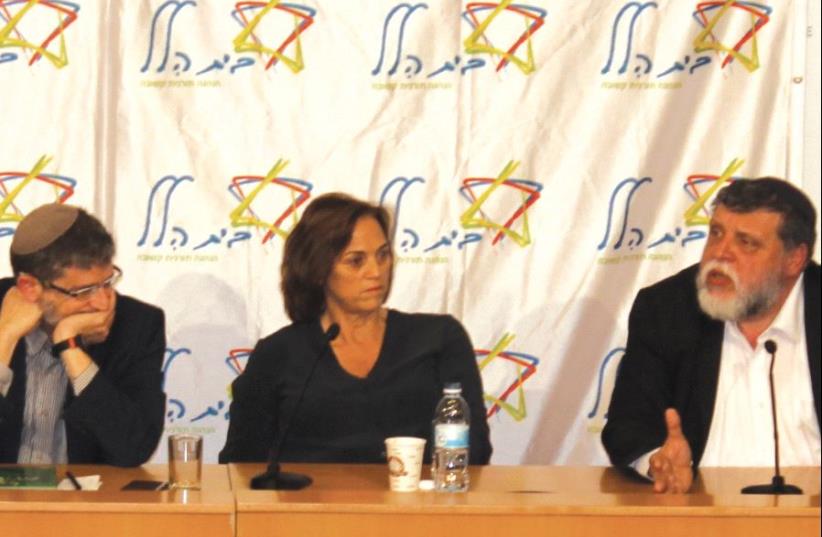 (Left to right) Rachelle Sprecher Fraenkel, Rabbi Yehuda Gilad, Dr. Ruth Calderon and Rabbi Rafi Feuerstein
(photo credit: BEIT HILLEL)
Advertisement
Anyone who goes online with moderate frequency has been inundated with horrific images of the crisis in Syria. Photographs and videos of crying, wounded children are particularly searing. However, moving from a state of passive sadness to active aid is often a protracted gap. For Jews, the issue becomes further complicated because Syria is not a friend to Israel.On January 8, Beit Hillel hosted an event at the Van Leer Jerusalem Institute to delve into this issue and raise awareness about the humanitarian crisis occurring so close to Israel’s North.The conference, “We Cannot Be Silent,” attracted 400 young adults, ranging from 18 to 22 years of age.
Read More...
“This crisis has touched a nerve,” Rabbanit Nechama Goldman Barash, one of the event organizers and a teacher at both Matan and Pardes Institute of Jewish Studies, says. “Even though Syria is our enemy, the fact that children are freezing and civilians are being injured and having to evacuate did speak to Israelis.We wanted to focus on having a fund-raiser to get awareness out there.We often don’t talk about humanitarian crises except our own, and certainly not with our enemies. We wanted to push back the taboo, and the concept evolved from there.”The evening began with dialogue groups and study, followed by the Minha afternoon prayer, more study, the Ma’ariv evening prayer, and then two central panel discussions.There was a suggested donation charge that went toward the purchase of medicine, equipment and baby food for Syrian refugee camps through the Israeli Flying Aid organization. In the end, “We Cannot Be Silent” raised approximately NIS 10,000 for Syrian refugee children.“It was very inspiring to see all those young people come,” Barash states. “We attracted largely Israeli yeshivot, which do have some Americans. So we ran a few English-speaking dialogue sessions for them, but the vast majority were Israeli young adults. It was the same day that the truck ramming had taken place, and yet despite that, there was a positive energy and the feeling that we were doing something different and important. There was also a sense of respectfulness around the issue that was very nice to see.”The event culminated in the final panel discussion, led by Rabbi Rafi Feuerstein of the Tzohar rabbinical organization; Rabbi Yehuda Gilad, who is a Beit Hillel board member and the rabbi of Kibbutz Lavi; and former MK Ruth Calderon.“I spoke about how we, as Jews and as a Jewish state, react to this kind of phenomenon because we are in a time of the beginning of redemption,” Gilad recalls. “The idea of the redemption is that we should be a light unto the nations.“When Abraham was chosen by Hashem [God] to go to Israel, the idea was for us to bring the message to the rest of the world. This message is one of moral sensitivity, morality, and to remind the rest of the world that every human being was created in the image of God,” Gilad continues.“We have suffered so much in our history from others who have discriminated, tortured, and killed us; we should be more sensitive to the suffering of others.“In this specific case, we are speaking about the state of our enemies. It’s very unusual to expect that we would help someone who is hostile to us, but when we speak about children, they are victims. We have to try to do something for them.”It was meaningful that the event was on the fast of 10 Tevet, which commemorates the beginning in a chain of calamities that led to the siege of the First Temple. “It was a day commemorating destruction where we had an event looking at destruction,” Barash adds.The two central panel discussions dealt with the halacha (Jewish law) regarding the question of giving charity to non-Jews. Based on the concept of darchei shalom, paths of peace, Jews have an obligation to help non-Jews.There was also discourse around the topic of the Jewish people being a part of the world, as opposed to separate from it. Yehuda Halevi’s Kuzari, written in the 12th century, was quoted – that Israel to the nations is like the heart to the rest of the body. According to this seminal work of Jewish philosophy, the same way that the heart brings blood to the body, Israel’s role is to vitalize the world. Thus, helping the needy, wherever they are, is of paramount importance.“The idea of the event was awareness, to pray for them, and to do something practically,” Gilad explains. “The very simple fact that we write a check, even for a small amount of money, to save one baby, is very important for them and for us. This is what I spoke about.Specifically, 70 years after the Holocaust, we always ask how the rest of the world was silent. How can we be silent when there is such a catastrophe taking place so close to us? We can’t be; we must do what we can.“Of course, people are worried that donated money might end up in the wrong hands and that they might exploit the opportunity, so we chose to go with IFA because they are responsible.That’s why we decided to work with them and do this small act of empathy and partnership. This is our duty.”After the event’s conclusion, Gilad expressed his hope that the young attendees would be inspired to take further action.The idea of building a field hospital in the Golan Heights and inviting volunteers from the rest of the world to come and help the wounded was introduced.It remains just an idea, but any of the 400 participants may work toward making it a reality.“It’s important that young people will have these kind of dreams to change the world,” Gilad concludes. “Now that we are in our own state, we are part of the world. We can’t see ourselves as separate; we are part of the family of the world.”www.facebook.com/BeitHillel.English