American, Briton among wounded in shooting on Amsterdam-Paris rail line

A man was arrested when the train stopped at Arras station in northern France but his motives were not yet known, a French official said. 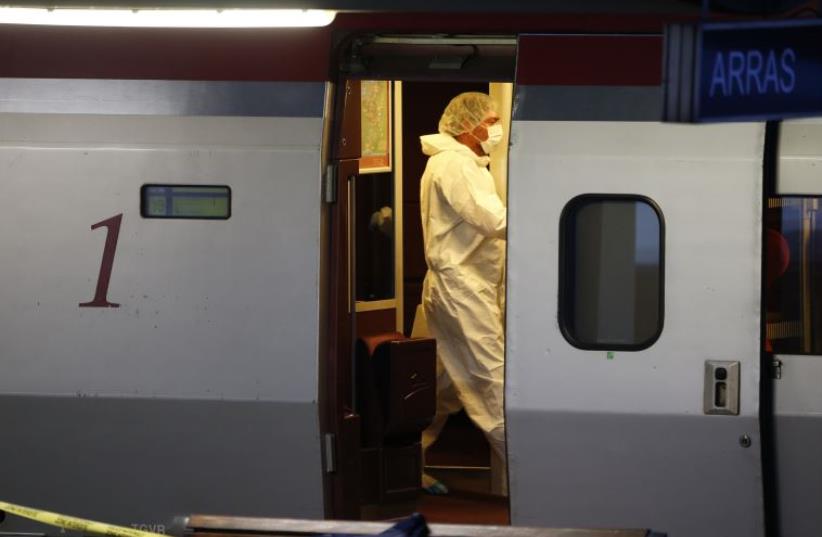 French investigating police in protective clothing collect clues inside the Thalys high-speed train where shots were fired in Arras
(photo credit: REUTERS)
Advertisement
Three people were wounded in a shooting incident on high-speed train between Amsterdam and Paris on Friday, the French Interior Ministry said.A man was arrested when the train stopped at Arras station in northern France but his motives were not yet known, a ministry spokesman said. Three US Marines were on board the train and overpowered the man, French media said.The wounded included an American and a Briton.Train operator Thalys said that travellers were safe and the situation was under control."A man opened fire on this Thalys train between Amsterdam and Paris," ministry spokesman Pierre Henry Brandet said on BFM-TV television."Talking about a terrorist motive would be premature at the moment."France has been on high security alert since Islamist militants killed 17 people in and around Paris in January."The man was armed with automatic weapons and knives. He was stopped by passengers," Christophe Piednoel, a spokesman for French railway SNCF said on iTele television.Police union official Slimane Hamzi said the 26-year-old man had said he was of Moroccan origin.Thalys is partly-owned by SNCF and Belgian railways.