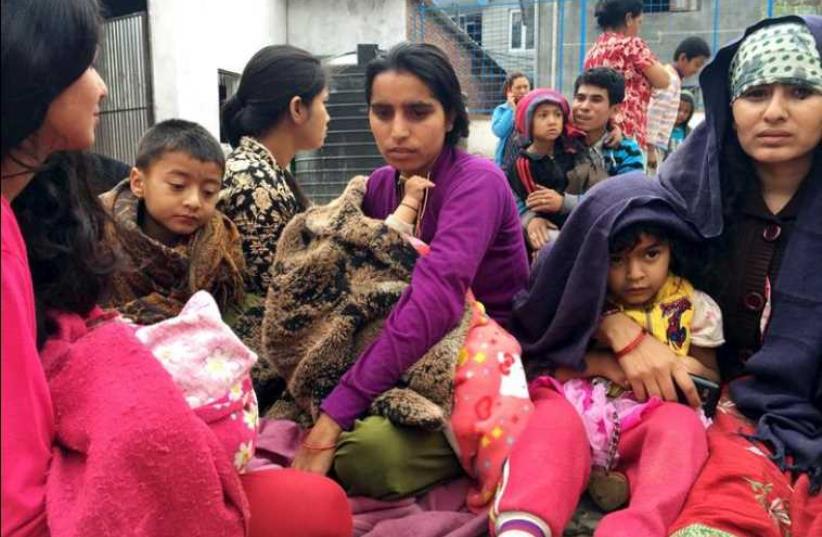 People wait at a school after a 7.7 magnitude earthquake struck, in Kathmandu, Nepal, April 25, 2015.
(photo credit: REUTERS)
KATHMANDU-  A powerful earthquake struck Nepal and sent tremors through northern India on Saturday, killing more than 1,300 people, touching off a deadly avalanche on Mount Everest and toppling a 19th-century tower in the capital Kathmandu.There were reports of devastation in outlying, isolated mountainous areas after the midday quake of magnitude 7.9, Nepal's worst in 81 years, centred 50 miles (80 km) east of the second city, Pokhara.As fears grew of a humanitarian disaster in the impoverished Himalayan nation of 28 million, an overwhelmed government appealed for foreign help. India was first to respond by sending in military aircraft with medical equipment and relief teams.A police official said the death toll in Nepal alone had reached 1,341, more than half of them in the Kathmandu Valley. A further 36 fatalities were reported in northern India, 12 in Chinese Tibet and four in Bangladesh.The quake was more destructive for being shallow, toppling buildings, opening gaping cracks in roads and sending people scurrying into the open as aftershocks rattled their damaged homes.Indian tourist Devyani Pant was in a Kathmandu coffee shop with friends when "suddenly the tables started trembling and paintings on the wall fell on the ground."I screamed and rushed outside," she told Reuters by telephone from the capital, where at least 300 people died."We are now collecting bodies and rushing the injured to the ambulance. We are being forced to pile several bodies one above the other to fit them in."An Indian army mountaineering team found 18 bodies on Mount Everest, where an avalanche unleashed by the earthquake swept through the base camp. More than 1,000 climbers had gathered there at the start of the climbing season.Choti Sherpa, who works at the Everest Summiteers Association, was unable to call her family and colleagues on the mountain. "Everyone is trying to contact each other, but we can't," she said. "We are all very worried."TOURIST TRAILA second tourism official, Mohan Krishna Sapkota, said it was "hard to even assess what the death toll and the extent of damage" around Everest could be."The trekkers are scattered all around the base camp and some had even trekked further up. It is almost impossible to get in touch with anyone."Around 300,000 foreign tourists were estimated to be in various parts of Nepal for the spring trekking and climbing season in the Himalayas, and officials were overwhelmed by calls from concerned friends and relatives.Nepal, sandwiched between India and China, has had its share of natural disasters. Its worst earthquake in 1934 killed more than 8,500 people.Political instability does little to boost Nepal's resilience; it has still not upgraded its weather forecasting system despite being surprised by unseasonal blizzards last autumn that killed 32 in the Annapurna massif.In 2001, Nepal made global headlines when the crown prince, Dipendra, gunned down 10 members of his family, including his father, King Birendra Shah, before killing himself.A Maoist rebellion subsequently transformed the kingdom into a republican democracy and abolished the monarchy altogether in 2008. A new constitution has yet to be agreed, however."This earthquake is the nightmare scenario," said Ian Kelman of the UCL Institute for Risk and Disaster Reduction in London."The country has ... suffered terrible conflicts, poor governance, and heart-wrenching poverty, all of which created and perpetuated the vulnerability which has been devastatingly exposed."TOWER TOPPLEDAmong the Kathmandu landmarks destroyed by the quake was the 60-metre-high (100-foot) Dharahara Tower, built in 1832 for the queen of Nepal, with a viewing balcony that had been open to visitors for the last 10 years.A jagged stump just 10 metres high was all that was left of the lighthouse-like structure. As bodies were pulled out of the ruins, a policeman said up to 200 people had been trapped inside.At the main hospital in Kathmandu, volunteers formed human chains to clear the way for ambulances to bring in the injured.Across the city, rescuers scrabbled through the rubble of destroyed buildings, among them ancient, wooden Hindu temples."I can see three bodies of monks trapped in the debris of a collapsed building near a monastery," said Pant, the tourist. "We are trying to pull the bodies out and look for anyone who is trapped."EVEREST AVALANCHEThe Everest avalanches, first reported by climbers, raised fears for those on the world's loftiest peak a year after a massive snowslide killed 16 Nepali guides just above base camp.Romanian climber Alex Gavan tweeted that there had been a "huge earthquake then huge avalanche" at base camp, forcing him to run for his life.In a later tweet Gavan made a desperate appeal for a helicopter to fly in and evacuate climbers who had been hurt: "Many dead. Much more badly injured. More to die if not heli asap."Another climber, Daniel Mazur, said the base camp had been severely damaged and his team were trapped. "Please pray for everyone," he tweeted.The tremors were felt as far away as New Delhi and other cities in northern India, with reports that they had lasted up to a minute.Indian Prime Minister Narendra Modi dispatched a military air transporter with three tonnes of supplies and a 40-strong disaster response team to Nepal. Three more planes were to follow, carrying a mobile hospital and further relief teams.