The unsuspecting passenger was arrested shortly after the incident. 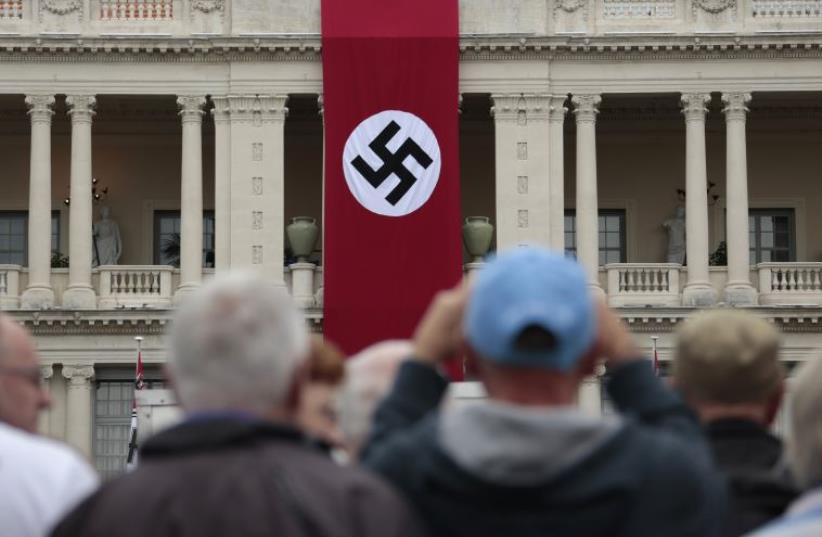 A Nazi swastika banner hangs on the facade of the Prefecture Palace in Nice which is being used as part of a movie set during the filming of a WWII film in the old city of Nice, France
(photo credit: REUTERS)
Advertisement
A German man traveling by train in Austria was arrested after throwing racist insults at a woman and her son, Germany's English speaking news site, The Local, reported Tuesday. The incident occurred after the young boy's foot touched the 65-year-old man's bag. A passenger in the area intervened after which the German man responded, "I gassed hundred of tattooed pics like you in Aushwitz"The passenger, a member of the EKO-Cobra, a special counter-terrorism unit in Austria, responded by arresting the German man. According to passengers the man continued his insults until being escorted off the train and into the hands of the police. The Austrian Prohibition Act of 1947 made the Nazi party illegal including expressing Nazi sentiments. A similar law was also instated in Germany. Earlier in July, Austria's government moved on Tuesday to seize the house where Adolf Hitler was born to prevent it becoming a site of pilgrimage for neo-Nazis, and the country's Interior Minister said he wanted to tear it down.