Sisters stood in silence in honor of victims spend about 10 minutes near eternal flame. 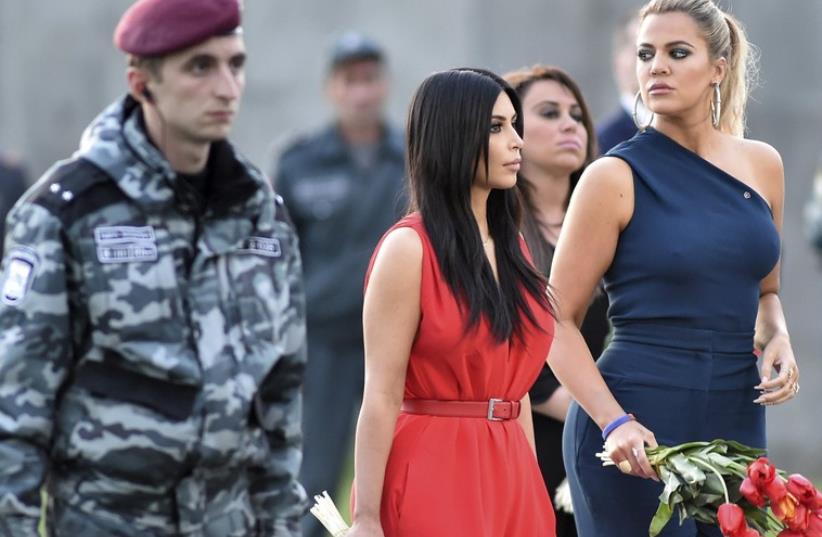 Kardashian sisters Kim and Khloe at Armenian Genocide Memorial
(photo credit: REUTERS)
Advertisement
US reality TV star Kim Kardashian and her sister Khloe Kardashian, visiting their ancestors' homeland of Armenia, placed flowers on Friday at a memorial to the 1915 mass killings of Armenians by Ottoman soldiers.Kim, wearing a flowing red outfit, laid red tulips near the eternal flame of the Armenian Genocide Memorial Complex on the outskirts of the capital Yerevan.The sisters then stood in silence in honor of the victims and spent about 10 minutes near the eternal flame.Kardashian arrived with her rapper husband Kanye West, their child North West and Khloe on Wednesday and were greeted by hundreds of fans.Prime Minister Hovik Abrahamyan received Kardashian and her family in Yerevan on Thursday."It was an honor to meet the Prime Minister of Armenia, Hovik Abrahamyan who expressed how proud they are that we are proud Armenians and we have not forgotten our roots! #NeverForget," Kardashian wrote on her Instagram account.The 100th anniversary of the mass killings in World War One will be commemorated by Armenia on April 24.Armenia, some Western historians and some foreign parliaments refer to the mass killings as genocide. Muslim Turkey accepts many Christian Armenians died in partisan fighting beginning in 1915, but it denies that up to 1.5 million were killed and that it amounted to genocide. Next week, Kim and Kanye are set to arrive in Israel on a personal visit for a couple of days and are planning to visit the Western Wall and other holy sites in Jerusalem.sign up to our newsletter