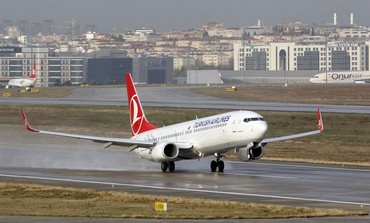 "As a consequence of our current cabin uniforms not including red, dark pink, et cetera, the use of lipstick and nail polish in these colors by our cabin crew impairs visual integrity," the statement said.Turkish Airlines declined a request for further comment.The guideline follows other restrictions on employees' appearance and on serving alcohol. Critics say they reflect the influence of the government's conservative religious values at the fast-growing state-run airline, one of Turkey's most recognised brands."This new guideline is totally down to Turkish Airlines management's desire to shape the company to fit its own political and ideological stance," Atilay Aycin, president of the airline's Hava-Is labour union, told Reuters."No one can deny that Turkey has become a more conservative, religious country."Turkey is 99 percent Muslim but the NATO state and European Union candidate has a secular constitution.Turkish Prime Minister Tayyip Erdogan's ruling AK Party, which traces its roots to a banned Islamic party, has relaxed the state's control over the expression of religion, such as once-strict limits imposed on wearing the Islamic-style headscarf.Such restrictions were aimed at reining in Islamism and improving women's rights, but effectively prevented many devout women from studying at university or taking government jobs.Turkish Airlines scrapped its own ban on the headscarf more than a year ago, and covered women now work at check-in counters and at other positions in the company, Aycin said.Other Turkish carriers also have guidelines on the appearance of cabin personnel.HIDDEN AGENDA?The flag carrier caused a stir earlier this year when newspapers published mockups of a new Ottoman-style uniform for stewardesses with ankle-length dresses, a proposal the airline's management appears to have since abandoned.That was followed by a ban on alcohol on planes flying to most domestic destinations and some Islamic countries."They are objecting to the lipstick and nail polish that we have been using for years," said Asli Gokmen, 30, a flight attendant who lost her job with more than 300 others last year during a union protest and is petitioning for her position back.No current employees were available for comment.Turks worried the government is undermining the country's secular order see a hidden agenda.On Twitter, women posted pictures after applying red lipstick. One wrote: "Why not just ban stewardesses altogether so we can all breathe a sigh of relief?"Some male Twitter users were indignant over the insinuation that red lipstick would induce a sexual frenzy.Turkish Airlines passenger Ahmet Yerli, 33, said he did not think the new guideline was a sign of creeping Islamisation but that the ban was still "absurd.""I've never heard of a plane crashing because of a women's lipstick," he said before his flight.

Reuters contribute to this report.
Advertisement
Subscribe for our daily newsletter