Alex Jones has been dubbed "The most paranoid man in America [who] is trying to overthrow the ‘global Stasi Borg state,’ one conspiracy theory at a time," by Rolling Stone magazine 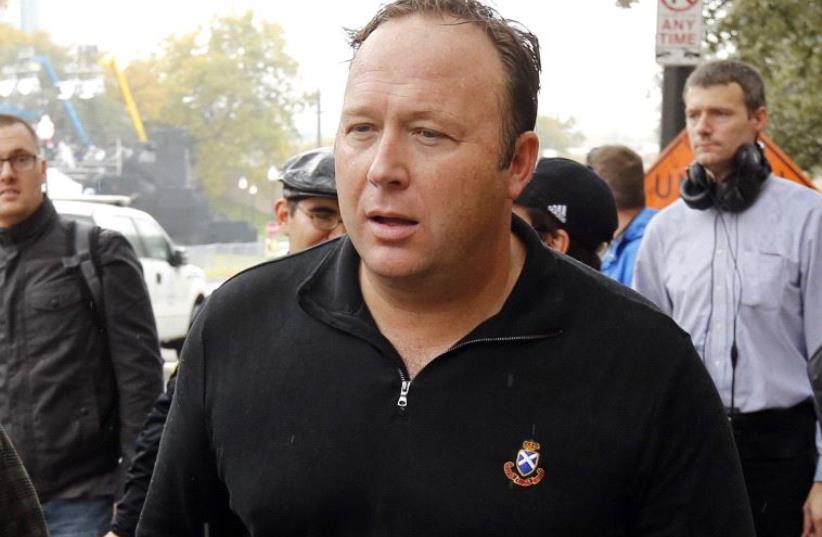 Radio Talk Show host Alex Jones
(photo credit: JIM BOURG / REUTERS)
Advertisement
Facebook announced on Monday that it had removed four pages belonging to US conspiracy theorist Alex Jones for "repeatedly posting content over the past several days" that breaks its community standards.Jones has been dubbed "the most paranoid man in America [who] is trying to overthrow the ‘global Stasi Borg state,’ one conspiracy theory at a time," by Rolling Stone magazine.Facebook said it removed his pages, including Infowars, "for glorifying violence, which violates our graphic violence policy, and using dehumanizing language to describe people who are transgender, Muslims and immigrants, which violates our hate speech policies."The conspiracy theorist has, in the past, also engaged in several anti-Jewish theories, claiming last year that Jews posed as KKK followers in Charlottesville in order to discredit white supremacist protesters. "I mean, quite frankly, I’ve been to these events, a lot of the KKK guys with their hats off look like they’re from the cast of “Seinfeld,” Jones said at the time. Earlier the same year, Jones made headlines for saying that “the Jewish mafia” was supporting efforts by moderate Republicans to “derail the Trump presidency.”Despite several such theories, Jones consistently denies that he is antisemitic and continues to claim that he is a staunch supporter of Israel. "I've never been to Israel but let me tell you, it's really historical and neat," he said in one of his YouTube videos. "I think I'm gonna plan a trip there soon, a two week trip."The self-proclaimed activist founds his support for Israel in his strong Islamophobic sentiments, calling the countries surrounding the Jewish state "nomadic groups which have come into the area as part of some jihad." Additionally, in one of his videos, he blames the left to have allied themselves with radical Islam, planning to "take over non-radical Islam and persecute non-radical Muslims, and then persecute Christians and animists, and persecute Zoroastrians, Hindus and Buddhist, atheist, straights and gays."In the same video, he proclaims that the "UN is colonizing countries all over for co-operations murdering entire villages on a daily basis."Since founding Infowars in 1999, Jones has built a vast audience. Among Infowars' millions of followers is none other than US President Donald Trump, who appeared on his show in 2015, praising the conspiracy theorist's reputation and promising "I will not let you down." In addition, after Trump won the election, American political journalism company Politico reported that he called Jones, saying "Listen, Alex, I just talked to kings and queens of the world, world leaders, you name it, but he said it doesn’t matter, I wanted to talk to you, to thank your audience, and I’ll be on the next few weeks to thank them.”Among the theories Jones has promoted is that the September 11 attacks on New York and Washington were staged by the government. Jones has also promoted a theory that the 2012 Sandy Hook school massacre was faked by left-wing forces to promote gun control. He is currently being sued in Texas by two Sandy Hook parents, seeking at least $1 million, claiming that they have been the subject of harassment driven by his programs.In response to Facebook's ban, Infowars editor-at-large Paul Joseph Watson tweeted: "Facebook bans Infowars. Permanently. Infowars was widely credited with playing a key role in getting Trump elected. This is a co-ordinated move ahead of the mid-terms to help Democrats. This is political censorship. This is culture war."

Facebook bans Infowars. Permanently.Infowars was widely credited with playing a key role in getting Trump elected.This is a co-ordinated move ahead of the mid-terms to help Democrats.This is political censorship. This is culture war.https://t.co/HkGOdjxhhk

Facebook, in late July, suspended the radio and Internet host's personal profile for 30 days from its site for what the company said was bullying and hate speech.Most of Jones's podcasts from his right-wing media platform Infowars have been removed from Apple's iTunes and podcast apps, the media news website BuzzFeed quoted a company spokesman as saying on Sunday.Only one program provided by Infowars, "RealNews with David Knight" remained on Apple's platforms on Sunday, according to media accounts.The move by Apple and Facebook is the most sweeping of a recent crackdown on Jones's programs by online sites that have suspended or removed some of his conspiracy-driven content. Spotify, a music and podcast streaming company, said on Monday that it had now removed all of Jones's Infowars programs from its platform.Despite the wide-reaching ban on Jones's material, Infowars editor Paul Joseph Watson remained optimistic."Every attempt to ban or censor Infowars has resulted in it only growing bigger. Be careful what you wish for," he tweeted.

Every attempt to ban or censor Infowars has resulted in it only growing bigger. Be careful what you wish for.