The 20th Knesset by the numbers: More Arabs and women, fewer Orthodox members

Changes are coming to the 20th Knesset.

By LAHAV HARKOV
MARCH 18, 2015 11:04
The Knesset
(photo credit: MARC ISRAEL SELLEM/THE JERUSALEM POST)
Advertisement
When the 20th Knesset is sworn on March 31, there will be quite a few quantitative changes in the legislature’s makeup, according to Wednesday’s results.The official election results will come on Thursday, after all the votes by soldiers and others who vote away from their hometown are counted, so some of these numbers are subject to changes, though they’re likely to be minor.The 71.8 percent voter turnout is a 16-year peak, the highest since 1999, when it was 78.7%, according to research by the Israel Democracy Institute, and the number of parties that passed the 3.25% electoral threshold is 10, the smallest since the 1992 election.The Likud grew by 10 seats, more than any other party, followed by Zionist Union and the Joint (Arab) List, which gained three each, when counting the parties in the previous Knesset that make up each one.
The parties that suffered the greatest losses were Yesh Atid, which lost eight seats, and Bayit Yehudi and Shas, which lost four each.The new Knesset is to have 40 new MKs: 10 from the Likud, nine each from Kulanu and Zionist Union, seven from the Joint List, two each from Bayit Yehudi and Yisrael Beytenu, and one from Yesh Atid.The number of Arab MKs jumped from 12 to 17, in part because the parties making up the Joint List’s numbers went up from 10 to 13, and also because the Likud and Zionist Union each added an Arab lawmaker. 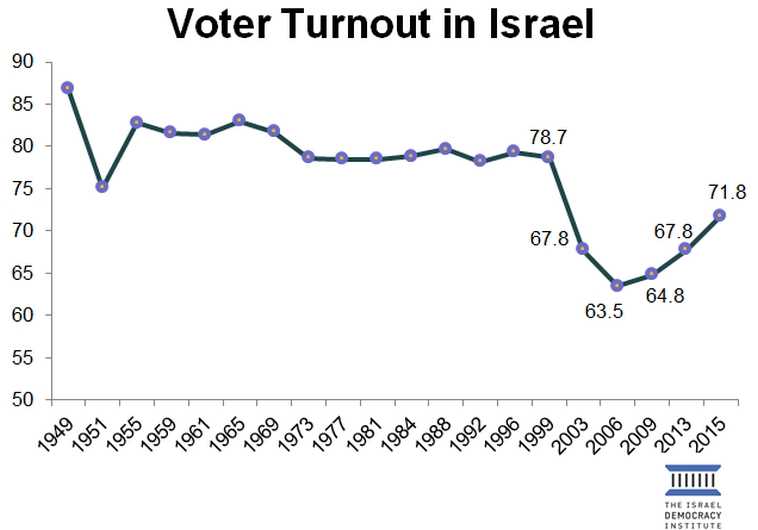 For the second time in a row, the Knesset broke its record for female parliamentarians, with 28, as opposed to 27 in the 19th Knesset. There are to be eight female MKs in Zionist Union, six in the Likud, four in Kulanu, three in Yesh Atid, two in Meretz and one each in Bayit Yehudi and Yisrael Beytenu.There are two lists in the Knesset with no women in them: Shas and United Torah Judaism.MK Merav Michaeli (Zionist Union), known for speaking out on feminist issues, was not impressed, pointing out that 28 is still less than 25% of the Knesset. She said she tried to pass a law guaranteeing that at least 40% of MKs on parties’ lists be female. In addition, she posited that if there is a coalition of right-wing and haredi parties, it will have few female MKs in it.“I’m concerned that in the expected coalition, in which there are parties [United Torah Judaism and Shas] and politicians who support excluding women, we will see a decline in the status of women, and that is a battle we must lead,” she said.The number of Orthodox MKs, including religious-Zionists and haredim, dropped from 39 to 28. The ultra-Orthodox parties lost a combined five seats, Bayit Yehudi lost five religious MKs, Yesh Atid lost one and Hatnua’s Elazar Stern, who ran in Yesh Atid, did not make it in to the Knesset. The Likud gained two – Jackie Levy and Abraham Naguise, in addition to Yuli Edelstein, Ze’ev Elkin and Tzipi Hotovely – and Zionist Union gained one – Revital Swid.Kulanu also has one new religious MK, Rachel Azaria.The number of MKs who have immigrated from English-speaking countries remained steady at two, with Kulanu’s Michael Oren replacing Yesh Atid’s Dov Lipman and United Torah Judaism’s Ya’acov Litzman remaining. MKs born in Ethiopia dropped from two, both in Yesh Atid, to one, Naguise of the Likud.