Among the suspects, whose names remain under gag-order, one is a well-known former IDF official. 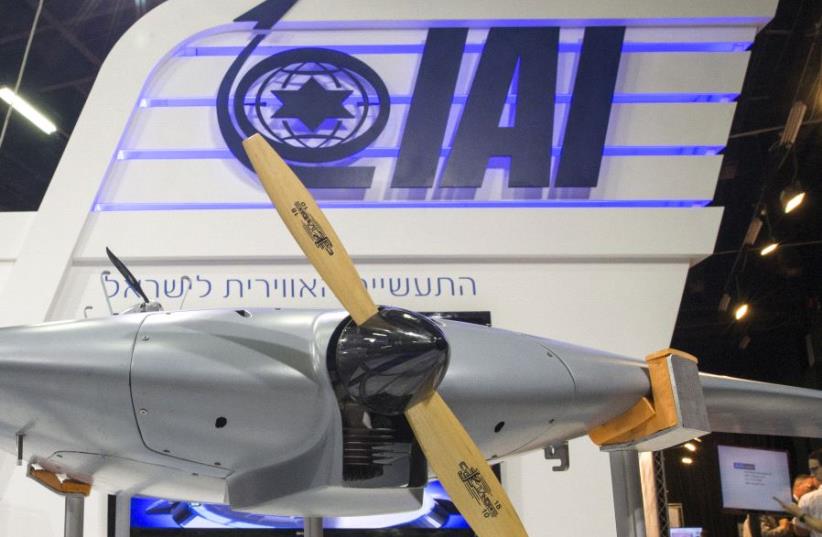 A "Bird Eye-650" Long Endurance mini-UAV system developed by Israel Aerospace Industries (IAI) is displayed at the Unmanned Vehicles Conference 2015 on November 9, 2015, in the Israeli coastal city of Tel Aviv
(photo credit: JACK GUEZ / AFP)
Advertisement
Police arrested 13 people on Wednesday, including retired IDF brigadier-general Amal Asad, on corruption allegations tied to the Israel Aerospace Industries, Israel’s largest government-owned aviation manufacturer.Asad, who now sits on the board of directors of IAI, is suspected of receiving bribes from businessmen at technology company DruzeNet to further the company’s interests with IAI.The arrests came after a nearly yearlong “extensive” undercover investigation by the Lahav 433 anti-fraud unit in cooperation with the Israel Tax Authority, the director of security of the Defense Establishment, an internal investigation branch of the Defense Ministry, accompanied by the State Attorney’s economic office.The investigation comprised “a large number of sub-allegations raising suspicion of corruption offenses including aggravated fraud, money laundering, theft by a public servant, fraud and breach of trust,” the police’s Intelligence and Investigations Division said in a statement.According to police, the investigation raised the suspicion of “systematic criminal behavior and deep corruption seemingly commonplace in Israel Aerospace Industries.”The general’s remand was extended for one day, while the remands of the 12 other suspects were extended from one to 14 days in the Rishon Lezion Magistrate’s Court.Police said the episode, known as case 630, includes a large number and variety of suspects at various levels of the company, including executives, board members, board directors, managers, junior staff and “those who were supposed to be gatekeepers and consultants, vendors and service providers in the aircraft industry.”The suspects’ homes and offices were searched on Wednesday.Asad’s attorney, Uri Kenan, denied the allegations, and called the arrest a “drastic procedure in this case when you can investigate without an arrest.”IAI said in a statement it would not comment on the investigation.“The CEO instructed all relevant parties to fully cooperate with the Israel Police as necessary and without restrictions and adhere to their guidelines in order to conclude the investigation and prosecute anyone who commits an offense,” the company said.Others named in the investigation are Shimon Frits, Mairav Tamir, Meir Astrovsky, Amos Ben David, Avi Fiss, Shmuel Albarchi. The names of five other suspects remain under gag order.Anna Ahronheim contributed to this report.