Australian and New Zealanders paid tribute to their fallen soldiers at the Commonwealth Graves cemetery. 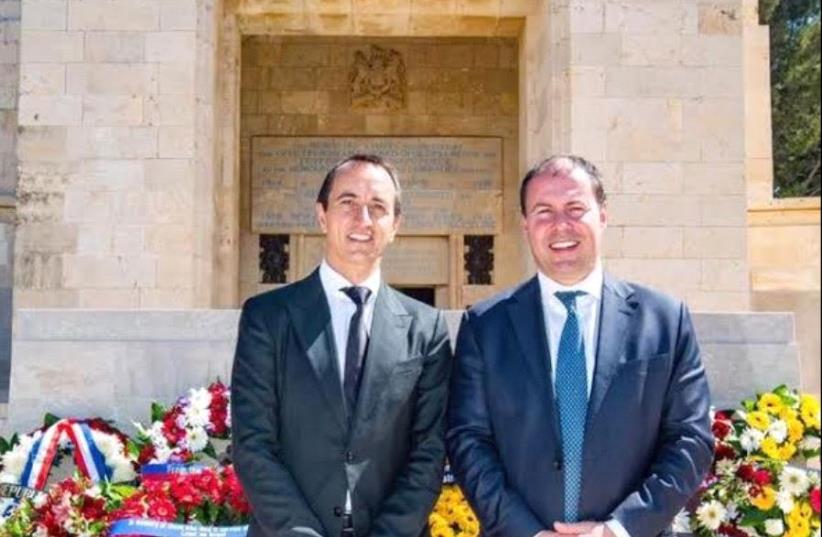 Australian Ambassador Dave Sharma (left) and Josh Frydenberg Minister for Environment and Energy at the Commonwealth War Graves Cemetery in Jerusalem where Jewish ANZACs are also buried
(photo credit: AUSTRALIAN EMBASSY FACEBOOK)
Advertisement
Australian and New Zealand expatriates, diplomats, soldiers, tourists and Zionist youth were joined by diplomats and military attaches from both enemy and allied nations of the First World War at the Commonwealth Graves cemetery on Mount Scopus on Tuesday for the annual ANZAC Day Commemoration.Originally a day to honor the Australian and New Zealand soldiers who fell in battle in Gallipoli in April 1915, ANZAC Day has since become the date on which the two countries honor all soldiers who fell in battle in subsequent wars.This year’s commemoration was somewhat different from those past, in that the keynote address was delivered not by the ambassador or the deputy head of mission, but by Australian Minister for the Environment and Energy Josh Frydenberg.For Australian Ambassador Dave Sharma, this was his last ANZAC Day in Israel.He will complete his term and return to Australia in the summer. However, he hopes to be back at the end of October for the centenary of the famous Battle of Beersheba, which Frydenberg noted helped lead to the creation of the State of Israel.Australian ambassadors have in the past mentioned a little known fact that the historic letter referred to as the Balfour Declaration would never have been delivered had the Battle of Beersheba been lost.He was extremely grateful for the care taken in Commonwealth War Graves Cemeteries in different parts of the world and said that there are 178 ANZACS buried in the Commonwealth War Graves Cemetery in Jerusalem.Two years after the defeat at Gallipoli, when the 4th Australian Light Horse Regiment made its famous charge and won the Battle of Beersheba, they helped to forge Australia’s national identity said Frydenberg, listing as characteristics endurance, courage, innovation, ingenuity and mateship in the face of adversity.He said that Australian Prime Minister Malcolm Turnbull and Prime Minister Benjamin Netanyahu would be in Beersheba at the end of October to honor the soldiers who fought that battle and those who fell in it.Wreaths were laid on the cemetery’s cenotaph by representatives of various organizations and by diplomats and military attaches of different countries, including former enemies Germany and Turkey.The wreath of Israel’s Foreign Ministry was placed by ambassador-designate to Australia Mark Sofer, together with the Ministry’s chief of protocol Meron Ruben and the head of the Pacific desk, Rafi Morav.